Army chief Gen Qamar Javed Bajwa has been making the right noises, but how far is Modi willing to go, and will this involve revisiting the status of J&K? 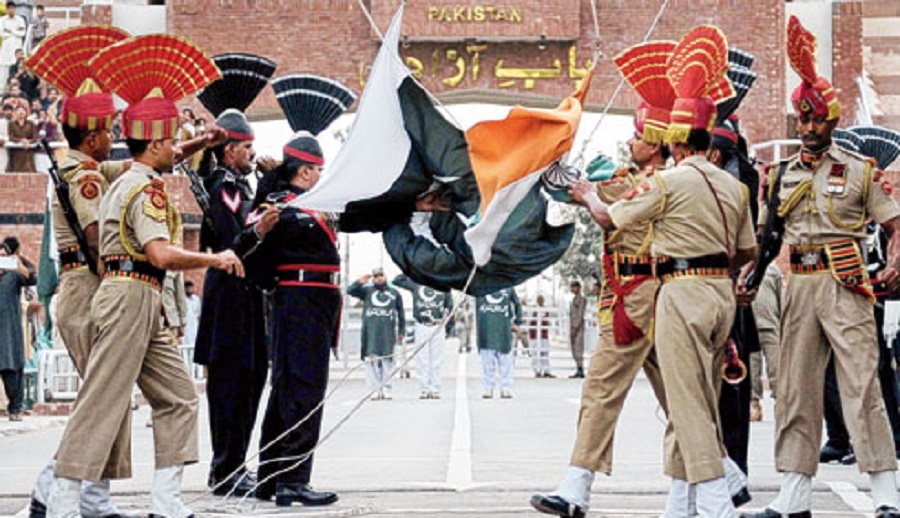 India, faced with the possibility of a two-front war with Pakistan in the west, and a newly aggressive China in the northern reaches, would meet Pakistan half-way, Bajwa said
File picture
Neena Gopal   |   Published 01.06.21, 11:04 AM

Hamid Mir, Pakistan’s popular talk show host didn’t mince his words after yet another journalist was beaten up by goons. But woven into the biting diatribe against the army’s efforts to browbeat the press was an additional searing critique of the Establishment’s hush-hush outreach to India. Left unsaid was the media’s scepticism over the manner in which Pakistan’s army and intelligence services arrogate to themselves, the right to ‘reset’ Pakistan at a time of their own choosing, while the effete civilian leadership has no choice but to play along.

Delhi remained silent after the UAE envoy to Washington, Yousuf Al Otaiba openly talked about facilitating the December 2020 meeting in the Emirati city of Dubai, that led to the February cease-fire on the Line of Control; Implicit in that deafening silence is that Delhi may not have gone willingly.

Pakistan, on the other hand, has everything to gain by playing along with the Gulf leaders, and the US, whose sole focus these last two years has been getting its last remaining soldiers out of Afghanistan. It is angling for the ultimate prize – a return to its former status as Washington’s pre-eminent ally in the region.

Pakistan’s canny army chief Gen. Qamar Javed Bajwa who is driving the initiative has used every opportunity to reach out to arch-rival India and Afghanistan, countries.

He smartly let out that the Dubai meeting was between his controversial top aide, the ISI chief Lt. Gen Faiz Hameed and Ajit Doval, India’s National Security Adviser – the two men at the top of the India-Pakistan strategic pecking order – to a select group of invitees at a six-hour Iftar in late April, knowing full well that it would be the talk of the town.

The General didn’t stop there. He urged the group to go out and build a consensus on the need to make peace with India, saying he would like to be given a chance to explain ‘Pulwama’ –the 2019 suicide bomb attack on an Indian Army convoy that killed 40 soldiers -  personally to Indian Prime Minister Narendra Modi.

The General, who first reached out to India by offering to open the Kartarpur Corridor, setting cameras clicking when he hugged Indian cricketer turned politician Navjot Singh Sidhu, told his audience that he felt the time for an India initiative was right. Delhi, faced with a two-front war with Pakistan in the west, and a newly aggressive China in the northern reaches, would be ready to meet Pakistan half-way, he said. Significantly, aides in the room let on that both sides were examining modalities - and concessions - on the main sticking point of Kashmir.

On Sunday, in a clear about turn to show that both the ‘Deep State’ and the elected civilian leadership were on the same page, Pakistan’s Prime Minister Imran Khan who has blown hot and cold (alongside his foreign minister Shah Mehmood Qureshi,) until now, finally fell in line. He said Pakistan was ready to restart talks with India, provided it comes up with a roadmap on restoring the previous status of Jammu and Kashmir.

Imran, who snapped ties with India, after Modi integrated Jammu & Kashmir into the Indian Union as a truncated Union Territory on August 5, 2019, by scrapping Article 370 and Article 35a, was signalling that he did not expect India to restore J&K’s status, before talks could begin, as he had insisted before. This is a major step, particularly as he raised the possibility of resuming trade with India, which he had baulked at only a few weeks ago. And in music to Washington’s ears, Imran said Pakistan was no longer looking for ‘strategic depth’ in Afghanistan, a reference to Pakistan’s  strategy of trying to take over its western neighbour.

India, Pakistan and Afghanistan are clearly being nudged and prodded to mend fences by the US and its Gulf Arab allies. But for India, peace comes at a price. What does India gain by doing a deal with the ‘unelected invisibles,’ who can switch the jihadi switch on and off at will?

Should Delhi – and Washington – be comforted by the head of Pakistan’s Army amplifying the eponymous Bajwa Doctrine, to ‘reset’ Pakistan, "divest the country of the terror tag," of being the nursery of jihad that preyed on its neighbours, and reinvent itself as a “normal” state. Can the general be taken at his word?

It’s clear that  Bajwa is driven by the need to show that Pakistan is changing and will embrace its old role as Washington’s trusted partner in the region, even offering the use of Pakistan’s military bases to the United States, which is seeking to keep a token presence in the region as it exits the Afghanistan-Pakistan theatre after 20 long years.

Both, the India peace offer that saw both sides announce a simultaneous cease-fire on the Line of Control in February, and the balancing act that Pakistan is now attempting in wooing Washington while trying not to alienate ‘iron brother’ Beijing is the brainchild of the Bajwa-Hameed duo.

The appointment of Moeed Yusuf as the National Security Advisor, who has worked in Washington and knows his way around the corridors of power there, and is a favoured protégé of the military-intelligence cabal that calls the shots in Islamabad, was a further sign of the Army’s moving yet another pawn into place.

But if the generals believe they will be able to control all their pieces in this elaborate chessboard, they may have to think again. Moeed had little answer when in a meeting with his American counterpart, Jake Sullivan, in Geneva, he was called out on Pakistan’s continuing destabilisation of Afghanistan. Sullivan, like Biden, is an old Af-Pak hand, and sees through Pakistan, playing both rogue and policeman.

Pakistan has good reason to make peace.  It needs to urgently rebuild its bankrupt economy and scale down crippling military expenditure. Financial mentors Saudi Arabia and the UAE are back fighting in Pakistan’s corner.

But for a free a flow of funds from the IMF and World Bank, Pakistan must be taken off the Financial Action Task Force grey list by proving it does not support terror. So far, Bajwa has stopped all infiltration across the LoC, but has done little to bring the mastermind behind the Mumbai 26/11 atttack, or Uri, and certainly not Pulwama, to book.  India would be doing itself no favours by backing off.

The bigger question however is how far Modi is willing to go to make peace with Pakistan, and whether this will involve revisiting the status of J&K? An Indian insider said integrating J&K into the Indian Union was mainly done to shut down former US President Donald Trump's repeated offers to mediate. But, keen to win favour with Biden and facing criticism from US Democrats for jailing human rights activists, the government’s rabid Hindutva and anti-minority stance, and incarceration of political leaders in J&K, Delhi has been forced to change tack. External Affairs Minister S. Jaishankar’s recent visit to the U.S. which wasn’t exactly a love fest, drove home the message that while India is vital in countering China, it’s rivalry with Islamabad cannot impact the United States’ Pakistan policy.

In return for cooperation, the Pakistan Army chief wants the US to pressure India to step back and accept Pakistan’s primacy in the Afghanistan endgame.  That’s what he’s been driving home to the US Special envoy on Afghanistan, Zalmay Khalilzad and UK chief of defence staff Sir Nicholas Carter. Knowing that with Pakistan under greater international scrutiny, he can no longer use its leverage over the Afghan Taliban and Kashmiri militants to continue the destabilisation of Afghanistan and India, Bajwa has claimed a complete U-turn and publicly pressured the Taliban’s top leadership to participate in talks with Kabul’s Ashraf Ghani government.

But the huge spike in violence in Afghanistan in recent weeks must raise questions over the Pakistan Army’s control of the Haqqani Network and Taliban, run through the Quetta, Miramshah and Peshawar Shura. Within Pakistan’s own borders too, the army has to contend with Tehreek-e-Taliban Pakistan and other Taliban affiliates. The TTP exploded a car bomb outside a hotel in Quetta, when the Chinese top envoy was visiting the Baloch capital. It’s but natural, that there is scepticism in Kabul on what the US-UK brokered Afghan-Pakistan peace accord will entail.

But what makes Modi’s inner circle believe the Pakistan Army chief, who speaks of forging a “strategic re-set of ties with India”, is the right man to do business with?  At the April 23 dinner Bajwa did say that India and Pakistan must “bury the past, resolve the Kashmir dispute through peaceful means,” with his aides’ adding that while Islamabad was still upset over India unilaterally changing the special status of J&K, it may not be averse to accepting the revocation of Article 370, but not 35/A, as that invited changes to the demography of the state. Big talk. Will India acquiesce to the big ask - when and if Islamabad declares Pakistan Occupied Kashmir, Gilgit and Baltistan as Pakistan’s fifth province?

Bajwa’s aides, interestingly, claim that India, in a major confidence-building measure has already reduced troop strength on the LoC. High-level Indian Army sources insist the three strike corps are very much in place.

Washington insiders say they are pushing for incremental next steps - a Doval-Yusuf face-to-face, resumption of diplomatic ties, reconvening the South Asian Association for Regional Co-operation as the backdrop for an India-Pakistan summit. The 2016 SAARC meet which Pakistan was set to host, was scrapped after Delhi, irate at the Uri terror attack, refused to attend.

But can Modi, weakened by his mishandling of the pandemic and several electoral setbacks, deliver? Agreeing to talk to Pakistan, under pressure is one thing. But, agreeing to cede ground on Kashmir? That may be far harder to sell to the bhakts.

The received wisdom has always been that only the powerful Pakistan army and the right-wing BJP can arrive at an India-Pakistan accord. In the past that hope has never been turned into reality.

Or is that what Modi's banking on? Are the leaders on both sides only making the right noises with no real intention of arriving at a permanent solution?