Advertisement
Home / Opinion / Mahabharata as a sieve to remove ambiguity

Mahabharata as a sieve to remove ambiguity 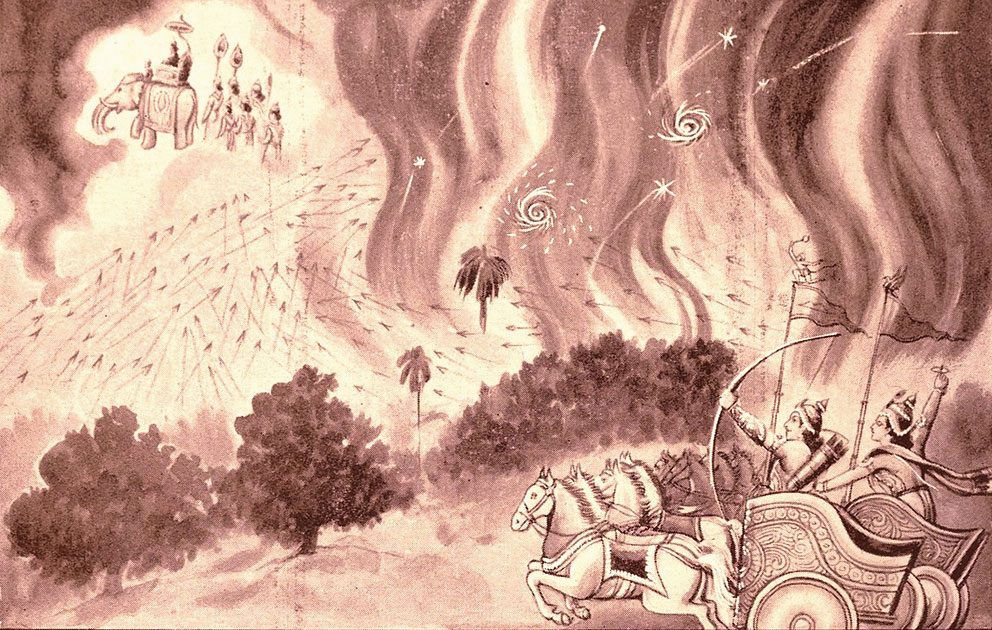 Six days from now, but 30 years ago, India became enchanted with the flaring nostrils of Duryodhana.

Mahabharat, produced and directed by the Chopras with an Urdu poet as scriptwriter, premiered on television on October 2, 1988. The television series, which has been shown on BBC as well as Fiji’s FBC TV, featured 94 episodes and ran for nearly two years.

What was fairly evident about this series as well as the versions it spawned later is their adherence to the popular retelling of the epic. The Kauravas are the unambiguous villains: hence their uncontested right to dilate the nostrils as a mark of turpitude. The Pandava brothers, the upholders of virtue, were spared this nasal contortion. The Chopras’ Mahabharat is a good example of the unwillingness of popular culture in India to shed its umbilical cord with conservatism. The Indian epics, or their retellings in countless languages and cultures, are discernibly layered, often blurring the lines between virtue and villainy. In his illuminating essay, “Repetition in the Mahabharata”, A.K. Ramanujan, the pioneering translator and poet, describes the Mahabharata’s amorphous nature as an “endless delicacy” which, tellingly, leads to an “incalculable calculus of consequences”. Such a broad spectrum of possibilities, each adding to the richness of a particular rendition, is predicated on the grey specks within the primary characters. Heroes thus exhibit failings, while villains get an opportunity to redeem themselves.

But popular narratives of the Mahabharata have functioned as a sieve to remove ambiguity. Many — but not all — of the blemishes of our heroes are documented. For instance, Yudhishthira’s half-truth to abet the murder of Drona in Kurukshetra or Krishna’s numerous trickeries are well-represented. But the import of the incineration of the Khandava forest by Arjuna and Krishna as an appeasement to Agni remained unexplored in the televised account. When reviewed in the light of contemporary environmental sensibilities, the burning down of an entire forest with most of its species would appear to be an act of wanton destruction on the part of the two heroes. But the beauty of the Mahabharata, indeed its complexity, lies in its ability to elude uncomplicated judgment. One strand of modern scholarship interprets the Khandava Parva as a signal of a premodern society’s acquisition of a metropolitan identity. In other words, Krishna and Arjuna are the harbingers of urbanity. Again, in some accounts, such as H.H. Wilson’s translation of the Vishnu Purana, there is evidence of Krishna ‘killing’ Ekalavya, already wronged by casteist machination that forces him to offer his thumb as gurudakshina to Drona. The ‘slaying’ of a victim of treachery should have dimmed Krishna’s halo a bit. But Harishankar Jaladas’s novel ends with Ekalavya going away to a remote island. Was the Blue God’s ‘killing’ of Ekalavya then merely a metaphorical allusion to the Nishad prince’s exile?

The Kauravas and their allies are not entirely shorn of grace either. Karna’s selflessness is, indeed, celebrated in popular lore. But Duryodhana need not have flared his nostrils perpetually. For he not only befriended Karna but also bestowed upon him the marker of nobility by gifting him a kingdom when Bheema ridiculed Karna for his plebeian blood. But as always, the Mahabharata invites scrutiny and scepticism. Is Duryodhana’s friendship with Karna a testimony to the prince’s inclusive vision? Or, given Karna’s martial prowess, was the alliance a necessity to further Duryodhana’s ambition? Then, there is Shakuni, portrayed by the Chopras as the man with a limp, the disability suggestive of the imperfection of his character. But Ramanujan cites the ‘folk-Mahabharatas’, a relatively little-known source, that provide a context to Shakuni’s motives. “Sakuni and his brothers were once cruelly imprisoned by Vicitravirya in the generation before Dhrtarastra.”

The excision of the nimbleness of thought in popular representations of the epics can be explained by the paucity of scholarship. Admittedly, it may be a bit too much to expect that Ramanand Sagar, whose Ramayan was televised a year before the Chopras’ Mahabharat, would have been appreciative of the dizzying diversity of the epic’s retellings, including Vimalasuri’s Jain version, which, Ramanujan writes, looks upon Ravana as noble and learned.

The lack of scholarship is, however, not a sufficient explanation, for the orthodoxy of the popular can also be attributed to the collective tendency to consecrate myth or history. This propensity to morally eulogize characters, to sanctify heroes unthinkingly, has stunted the public discourse’s ability to appreciate, even learn from, the twilight universe that is lit up by these fascinating texts. Is there a case to argue that the righteousness accorded to epics and their heroes stems from a fundamental human anxiety concerning chaos? The Mahabharata, in most of its retellings, turns boundaries fluid. Its veneration, hawkish guardians know, is one way of preventing chaos from seeping into their orderly domain.

The subversive quality of the sacred texts must now be reclaimed to purge the threat posed by a resurrected Far Right in India. The consequences of the sangh parivar’s distortion of history and its endorsement of the narrow interpretation of the epics are palpable. Scholarly claims that expose the prejudices against Aurangzeb or, for that matter, point to Krishna’s chequered legacy, inevitably evoke howls of indignant protest and, worse, threats of violence in New India. The malaise, so far, has been fought by invoking the spirit of positivism. In other words, when a leader of the Bharatiya Janata Party, the minister of primary education at that, tweaks Rajasthan’s curriculum to propagate that Maharana Pratap defeated Akbar in Haldighati, outraged historians have sought to counter the propaganda by relying on factual evidence to correct the mischievous inversion. But facts may no longer have the same edge in a Post-Truth polity. It is time to fight falsification by unleashing the very greyness of fiction that sectarianism seeks to expunge. Given Mahabharata’s ability to obfuscate the borders between good and evil, can it be used as a template to contextualize kings, real and imagined?

Krishna, stripped of the burden of devotion, could then be appreciated for his share of mortal strengths and weaknesses, much like that maligned medieval emperor.