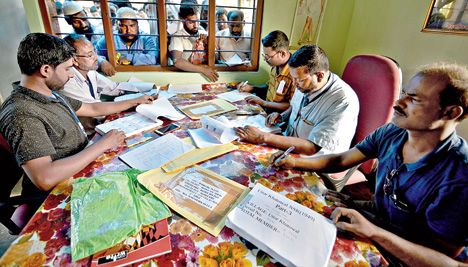 When it comes to Assam and, indeed, most of Northeast India, there is an irresistible temptation on the part of Middle India to either wallow in ignorance or fall back on exotica. The patchy news of strange but unending insurgencies and colourful headgear dominates the heartland's imagination of a corner of India. This is not to suggest that the Northeast isn't quite regarded as a part of the larger India story, only that its inclusion is often token, perfunctory and coloured by profound ignorance.

Some of this ignorance was strikingly in evidence in the reaction to recent developments in Assam and even its fallout in the neighbouring state of Meghalaya. Although preceded by enough warnings, it would not be erroneous to suggest that the publication of the draft National Register of Citizens, including the omission of nearly 40 lakh people who claimed to be citizens of India, took both the political class and the liberal intelligentsia by alarm. That there was a problem centred on illegal immigration to the region had figured in the national imagination since the early 1980s when Assam witnessed a robust 'anti-foreigner' movement spearheaded by students. Yet, like many of the seemingly intractable problems of the region, it was imagined that a combination of development grants - the financial 'packages' that have been so favoured by national administrators - and deft politics would set things right and buy peace, at least till the fire next time.

The NRC controversy has turned out to be different. This is not because of the discovery of illegal non-citizens living in our midst. Every city, from Jodhpur to Bangalore, has experienced the steady influx of people claiming to be Bengalis from West Bengal but commonly recognized as immigrants from Bangladesh. Even in distant Jammu, there has been localized tension over the inexplicable presence of an estimated 40,000 Rohingyas from Myanmar. And there are occasional noises made by political parties about foreigners who have grabbed menial jobs, entered the electoral rolls and even added to local crime. The Hindi term ghuspetiya (infiltrators) attached to them is evocative and redolent with meaning.

What has made the draft NRC findings dramatic is not the realization that there are foreigners who are settled illegally in Assam but the sheer numbers involved. The discovery of 40 lakh non-citizens in Assam has been greeted with a measure of incredulity by a section of the commentariat, and more so after the media played up instances of undeniable Indian citizens who have found themselves excluded from the register of citizens. Indeed, it is estimated in political circles that this number is likely to come down by at least 10 lakh once the state governments responsible for confirming the documentation of citizens now living in Assam realize the gravity of the situation.

However, even if there is a 25 per cent decline in the number of non-citizens in the final NRC that is scheduled to be published after December 31 this year, the numbers are still too large for comfort. The sheer volume of non-citizens that, in theory at least, should be repatriated to their country of origin has occasioned concern, if not alarm. There have been accusations that the Narendra Modi government has used the NRC - whose progress, incidentally, was monitored by the Supreme Court - to weed out Muslims from the electoral rolls of Assam. Although this flies in the face of the fact that those excluded from the NRC also include a large number of Bengali-speaking Hindus, particularly in the Barak Valley, the impression that the NRC is politically motivated has taken hold. I read an article in a liberal newspaper published from southern India asking how it was possible for 40 lakh to sneak into India without anyone being the wiser.

The consternation over numbers is quite spurious. On May 6, 1997, the venerable communist leader, Indrajit Gupta, who happened to be the home minister in the United Front government, told Parliament that there were an estimated 1.05 crore illegal immigrants living in India. Of these, 54 lakh were in West Bengal, 40 lakh in Assam, eight lakh in Tripura and five lakh each in Bihar, Maharashtra, Rajasthan and Delhi. Earlier, on April 10, 1992, the then chief minister of Assam, Hiteswar Saikia - who had a reputation of being extremely partial towards the state's minorities - stated there were 30 lakh illegal migrants from Bangladesh in Assam. However, two days later, confronted by outrage from his support base, he did an astonishing U-turn and stated there were no illegal migrants in his state.

In view of the 40 lakh figure supplied by the United Front government at the Centre and the 30 lakh figure the head of a Congress government in the state let slip unwittingly, the excluded list in the NRC doesn't seem astonishing. The censuses tell a similar story. Between 1971 and 1991, the growth of the Hindu population of Assam was 41.89 per cent (the all-India growth was 48.38 per cent) but the Muslim growth was 77.42 per cent (against an all-India growth of 55.04 per cent). In short, even if the excluded list of the NRC is pruned, the sheer scale of the problem posed by illegal immigration into Assam cannot be minimized.

Neither for that matter is it possible to underplay the grievance of the people of Assam who have been fighting since the beginning of the 20th century to retain their linguistic and cultural identity. Unlike West Bengal or, for that matter, Punjab, where the demographic aftershocks of Partition were absorbed by linguistic commonality, the Assamese, particularly in the Brahmaputra Valley, were confronted with peoples who were linguistically, culturally and sometimes religiously different. To cap it all, since the 1970s, Assamese Hindus were confronted with a Muslim vote bank that, for all practical purposes, exercised a veto on all attempts to deal with the problem.

Rajiv Gandhi attempted to break the mould through the Assam Accord that set March 25, 1971 as the cut-off date for Indian nationality. Yet in the matter of detecting illegal migrants, the Assam Accord faced subversion. The operations of the Foreigners Act was substituted by an Illegal Migrants (Determination by Tribunal) Act that was deemed applicable in Assam alone. The IMDT Act turned the Foreigners Act on its head and made it virtually impossible to detect dodgy claims of being Indian. It was only after the Supreme Court struck down the IMDT Act and Assam elected a Bharatiya Janata Party government that the detection of foreigners was pursued with the necessary political will.

Over the past fortnight, as the furore over the draft NRC has understandably intensified, there have been many passionate appeals by well-meaning people asking the government to show compassion and demonstrate its insaniyat. The appeals have already had some effect on the Supreme Court which appears to have applied the brakes on its earlier determination to detect and deport illegal settlers from Assam. However, before the whole issue is put into deep freeze once again - as many politicians secretly hope - it is important to recognize that recent history has been unjust and even cruel to Assam. Unfortunately, this injustice hasn't been sufficiently acknowledged and relatively little has been done to accommodate Assam's concerns. The NRC controversy has at least presented a sympathetic government an opportunity of demonstrating that the indigenous people of Assam and the Northeast also need to be shown insaniyat, and not forgotten because they don't contribute enough seats to the Lok Sabha.

Yet there is an outstanding challenge. How are the interests of the Assamese people to be reconciled with justice for those who fled East Pakistan and Bangladesh because they were of a wrong religion?