Advertisement
Home / Opinion / One step back 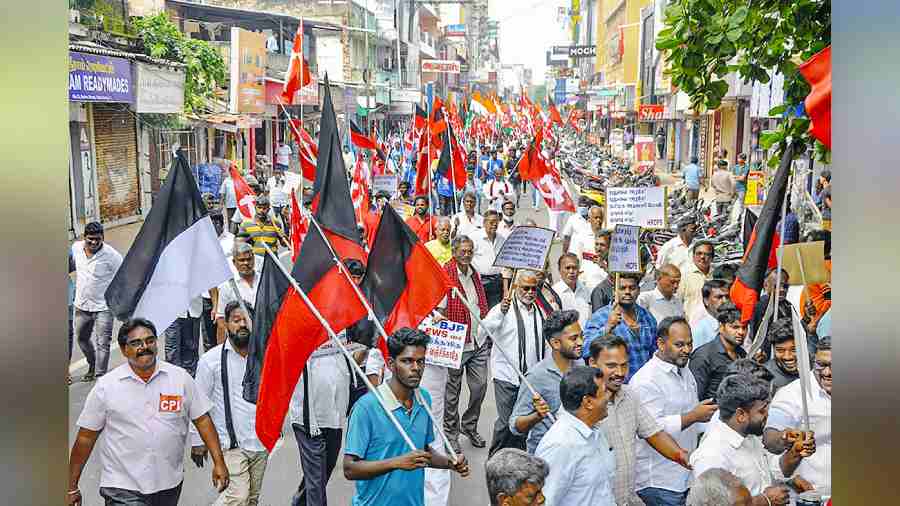 Social and political activists stage a protest against EWS reservations in Puducherry
T.M. Krishna   |   Published 23.11.22, 04:21 AM

The Supreme Court’s verdict on reservations for the economically weaker sections has triggered many conversations on the real purpose of affirmative action. Legal experts have expressed their disappointment and fear that this may skew the philosophy behind reservations. But, except for a few political parties such as the Dravida Munnetra Kazhagam and the Viduthalai Chiruthaigal Katchi, others have been circumspect or confused in their response. Many among the privileged middle-class have come out in support of this measure. Their mind is directed towards the poor, caste-privileged families and their suffering. Soon enough, the emotional false equivalence between two sets of have-nots is put in place. Behind this open or lukewarm support in society and among the judges — those who upheld and dissented the amendment — lies a psychological bent of mind. A culturally instilled perception that makes one wary of caste-based reservations and a strong feeling that they deprive people with caste privilege of what is due to them. An extension of this is the infamous ‘merit’ argument.

The problem begins with our inability to understand what it means to be oppressed and discriminated against. To be born in a social order that, from your birth, informs you of your nothingness. The discriminated are reduced to lifeless mechanical bodies that provide services for the socio-culturally privileged. The emotional being is erased. Who we are, our emotional landscape, perception of society, and where and how we see ourselves in this world need to be nurtured. If the person is brought up with signals, both obvious and implied, that constantly reiterate his/her irrelevance, seed hopelessness and force resignation, then life is a timeline of degrees of drudgery, which is internally justified as an acceptable reality. The mind does not know any form of self-affirmation or actuation of self-will.

It is from this nadir that people from the margins hope to escape and find joy. Hence, education and opportunity are not just methods of getting a better economic life. They are also mechanisms to enable unfettered personal happiness. While we celebrate the Global Happiness Index as a beautiful way of measuring social well-being, we refuse to recognise the very same happiness as the foundation of any socio-economic initiative. Reservations are meant to provide access and facilities, but this is intrinsically coupled with gifting those who have been denied the fundamental right to happiness. Education and employment are not words of economy; they describe learning, building of social relationships based on equality and respect, being able to wonder at the natural world and gaining self-worth. This is, essentially, the meaning of ‘dignity’, as used in the Preamble to the Constitution.

This is why our understanding of the ‘creamy layer’ needs nuance. Economic status alone cannot determine whether an individual belongs to the creamy layer or not. Other aspects, such as social position, education and employment — factors both material and abstract — play a decisive role. There are also deep-rooted cultural changes that need to occur, which may take many generations.

Let me give you a simple example. Let us say the child from a marginalised family begins to go to school but, one day, adamantly refuses to get up. The probability of the parents not insisting is high because the experience of a child resisting going to school has never happened before. While the significance of school going is socially internalised, the need for regularity, order and a different kind of discipline is not understood.

In a household of socio-cultural privilege, the parents will make sure that the child goes despite protests because the school-going habit has been passed down through generations. This is exactly why lower middle-class brahmins will somehow ensure that their children get school education. The acquisition of wealth alone will not solve this problem. We need a society that is conducive to and supportive of such cultural changes. Instead, if we constantly remind the child and the parents that they must feel fortunate to have access to a school, education will not do what it is meant to. This is what Bezwada Wilson of the Safai Karmachari Andolan implied when he said, “The school was not a happy place for me.”

Even if a person with caste privilege lacks financial resources, he has an emotional strength and imagination that comes from his social and cultural capital. It is undeniable that society is designed in a manner that support for the poor among the caste privileged comes far more easily. Believing that everything can be reduced to one’s income is a fallacious argument. If we shift the frame from caste to sex or gender, we will never make that case. The status of a poor trans-person is not equivalent to that of a male, nor is the social respect a poor homosexual receives the same as that of a heterosexual male. It is this kind of socio-cultural inequality that reservation addresses. A disparity rooted in social imbalance deeply affects a person’s ability to live with grace and assertion.

Am I being insensitive to the plight of the economically backward among the caste privileged? No doubt various mechanisms are required to bridge the gap here and these have to be strengthened and widened. But the question before us is whether these initiatives fall under the intentionality behind reservations. As I have argued, reservation is not an economic support system. It is about social, emotional and intellectual upliftment of those whom society structurally discards.

The other argument often made by the caste privileged is that the genesis for social oppression is economic aggrandisement. That social markers, cultural exclusions and religious dictums are put in place because of the greed of a certain section of society. But if we are to take into account human beings’ innate nature to slot and control, it is more likely that the right to wealth was given only to those who ticked certain social boxes and did not disrupt the smooth functioning of the powerful. Societies are based on caste, race, ethnicity, sex, gender and colour, and these markers determine who can acquire and to what extent, not the other way round.

Allowing reservations for EWS gives legitimacy to the stigma around castebased reservations. It is the first step in reducing all our social identities to money and allowing us to continue trampling upon the socially marginalised.

T.M. Krishna is a leading Indian musician and a prominent public intellectual