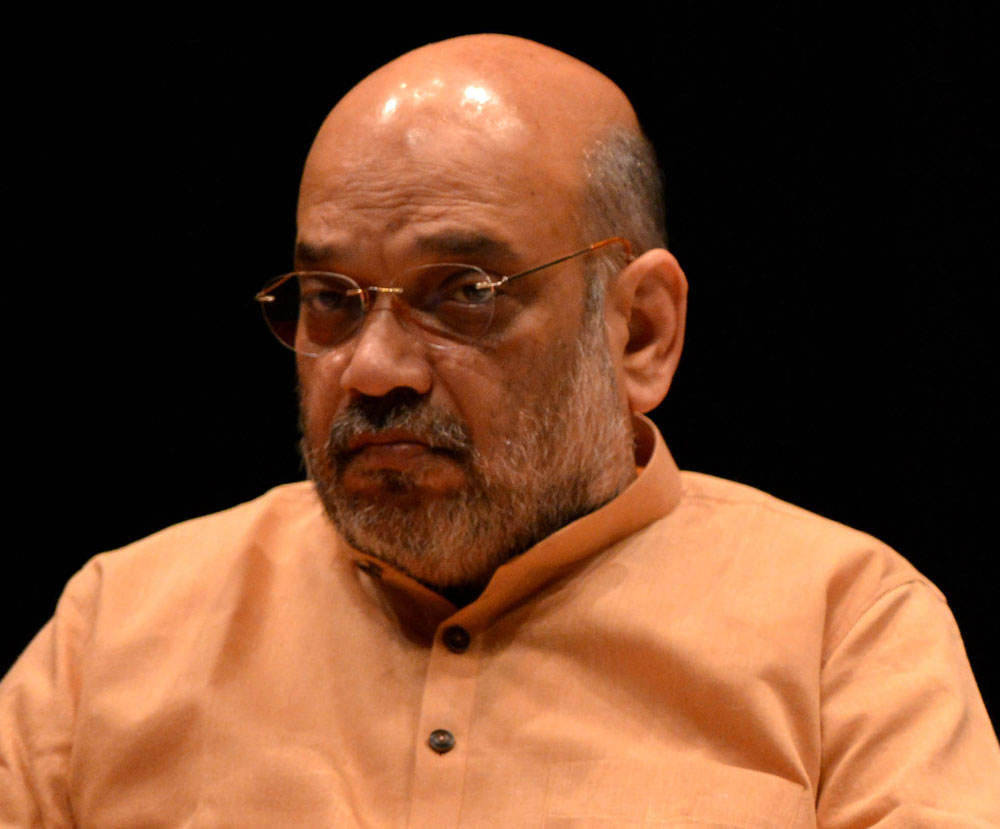 It might seem incredible today, but Amit Shah first came into national prominence as a result of the alleged fake encounters. In spite of all the evidence with the CBI, the case fell through after Shah’s fortunes changed miraculously in the wake of the 2014 general elections.
Telegraph file picture
Manini Chatterjee   |   Published 26.11.18, 02:47 AM

Exactly thirteen years ago to the day, Gujarat police shot dead a man called Sohrabuddin Sheikh. Like many similar “encounter” killings in the state at the time, this death, too, would have gone unnoticed in the rest of the country. But a series of developments after the murder on November 26, 2005 linked Sohrabuddin’s name indelibly with that of another man — Amit Shah.

Strenuous efforts have been made over the last four and a half years to obliterate that link from public memory. But thanks to the depositions of two police officers — Amitabh Thakur and Sandeep Tamgadge — before a special Central Bureau of Investigation court in Mumbai, it has resurfaced over the last one week. The depositions, not surprisingly, did not make headlines on any news channel and were tucked away in the inside pages of a brave newspaper or two.

Yet, regardless of the eventual fate of the trial, the proceedings of the special court have been remarkable — not only for jogging our memory about things we are advised to forget, but also for showing that there are still people in our midst who are unafraid of the powerful.

It might seem incredible today, but Amit Shah first came into national prominence as a result of the alleged fake encounters. The then Gujarat home minister lost his job, was exiled from his home state, and was arrested after being named by the CBI as one of the main accused in the triple murder of Sohrabuddin Sheikh, his wife, Kauser Bi, and his associate, Tulsiram Prajapati (who was killed in another alleged fake encounter a year later on December 28, 2006).

Immediately after Sohrabuddin’s murder, the Gujarat police claimed that he was a “terrorist” with links with organizations in Pakistan and was planning to assassinate a prominent leader of Gujarat. He had been cornered, and was killed when he tried to shoot the police and escape.

That story fell apart soon enough. Sohrabuddin’s brother, Rubabuddin, wrote a letter to the Supreme Court questioning the police version and seeking information about Kauser Bi who went missing around the time of her husband’s murder. The Supreme Court ordered the Gujarat police to investigate the case.

The CBI, which took over the case at the behest of the Supreme Court in 2010, went much further with its investigations. The CBI charge sheet makes for chilling reading. It details how Sohrabuddin was a criminal and extortionist with close links with the Gujarat police and politicians. His extortion racket was focused on marble traders in Rajasthan. But when he began getting out control, the Gujarat cops decided to eliminate him.

The charge sheet also gives details of how a Gujarat police team intercepted the luxury bus in which Sohrabuddin, Kauser Bi and Tulsiram Prajapati were travelling from Hyderabad to Sangli, dragged them out, brought them to Ahmedabad (Prajapati was taken to Rajasthan), and subsequently killed them.

But the most significant part of the charge sheets in both the fake encounter cases was the outlining of the role played by Amit Shah. The Gujarat home minister closely monitored the killings and the subsequent attempts at cover-up according to the CBI. “Shri Amit Shah,” the charge sheet said, directed his close confidantes “to convince, coerce, threaten, influence the witnesses on his behalf to conceal the truth from CBI about the fake encounter of Sohrabuddin.”

Some of these interactions were videographed by those involved and “the transcription of audio-visual records also indicates how the retraction of witnesses have been managed at the instance of senior politician, Shri Amit Shah,” it said.

The charge sheet also refers to a recorded conversation in jail between two arrested police officers which “revealed that while Sohrabuddin and his wife were in illegal custody of ATS, Gujarat Police, Shri D.G. Vanzara was in constant touch over telephone with Shri Amit Shah and was continuously seeking instructions. The recordings also revealed that instructions of killing Kauserbi were also given by Shri Amit Shah to Shri D.G. Vanzara.”

In spite of all this evidence with the CBI, the case fell through after Amit Shah’s fortunes changed miraculously after the general elections of 2014. Two months after Narendra Modi swept to victory, Shah was made the president of the Bharatiya Janata Party. As the closest friend and confidante of the prime minister, Amit Shah quickly rose to become the second most powerful man in the country.

And with great power comes great ability — to sweep clean one’s past of any dark stains that tainted it. The trajectory of the fake encounter case since 2014 is now well known. The first trial judge of the special CBI court hearing the case, J.T. Utpat, was transferred out in June 2014, days after he pulled up Shah for not turning up before him. The next judge, B.H. Loya, suddenly died in Nagpur under mysterious circumstances. Amit Shah proved third time lucky — the third judge hearing the case, M.B. Gosavi, discharged him from the fake encounter case altogether.

That streak of luck has persisted for a long while. The CBI, which invariably appeals against the discharge of its own charge sheet in a criminal case, failed to do so in the case of Shah. The trial court’s magnanimity went beyond Shah. Between 2014 and 2017, charges were dismissed against 16 of the original 38 accused in the case. They included all IPS officers. The CBI, once again, did not appeal against these dismissals. The Bombay High Court, too, dismissed PILs questioning the agency’s decision to not challenge the discharge of Amit Shah and others.

It is in this backdrop that the stand taken by the two police officers — the last of the prosecution witnesses to depose in the trial — seems astounding.

On November 19, Amitabh Thakur who was the CBI’s chief investigating officer in the Sohrabuddin fake encounter case, sought to draw a distinction between the small fry still facing trial and the big fish who got away.

Thakur, who is currently posted as inspector-general (law and order) in Odisha, asserted before the court that the 22 accused did not have a motive to kill Sohrabuddin. Rather, they “were following instructions of their superiors and were discharging their official duty.”

Thakur then took the courage to name the top accused who had since been discharged. He told the court that as per the charge sheet filed by him, five people were “political and monetary beneficiaries” of the killing. The five were Amit Shah, D.G. Vanzara, Rajkumar Pandian, Dinesh M.N. and Abhay Chudasama.

Two days later, Sandeep Tamgadge who had been the chief investigating officer probing the Tulsiram Prajapati encounter killing went even further. Tamgadge, an officer from the Nagaland cadre who is now posted in Kohima, named Amit Shah, Vanzara, Pandian and Dinesh M.N. as the “principal conspirators” in the alleged murder of Tulsiram. He also asserted that there was a “criminal-politician-police nexus”, and Amit Shah and the Rajasthan home minister, Gulab Chand Kataria (who is among the 16 discharged) were the politicians, and Sohrabuddin, Tulsiram and another associate, Azam Khan, were the criminals who formed part of this nexus. Tamgadge said the call data records of the accused, including Shah, established their role in the encounter.

Earlier this month, another prosecution witness, made a startling disclosure. Azam Khan, the associate of Sohrabuddin and Tulsiram, told the trial court that Sohrabuddin had told him that Vanzara “on instructions from the top” had given him the contract to kill a former Gujarat home minister, Haren Pandya, who was killed in 2003. Khan said he had disclosed this information to the CBI investigator who refused to record it.

Of the 210 prosecution witnesses who were examined by the trial court since November last year, as many as 92 turned hostile. With their luck with the courts and the CBI post-2014, Amit Shah and his cohorts have reasons to smile. But the statements of the two officers in the final days of the trial and Azam Khan’s claim may also make them realize that skeletons locked tightly in a cupboard can sometimes rattle enough to make a lot of noise...