Advertisement
Home / Opinion / Too many corpses

A miasma of menace swirls around the Loya controversy 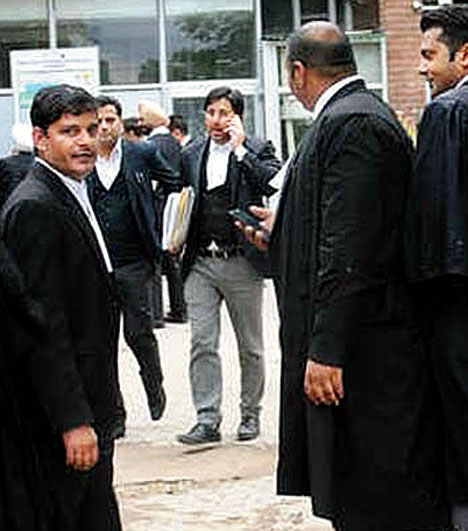 As any crime fiction aficionado knows, it never stops with one death. The original crime is compounded by a cover-up, which leads to more crimes and yet more cover-ups. Real life, it would seem, is no different.

With the Supreme Court holding regular hearings over the past four weeks, the death of the judge, Brijgopal Harkishan Loya, is much in the news these days. While the petitioners in the case are demanding an independent investigation into what they insist is a mysterious death, the Maharashtra government is strongly arguing that no such probe is necessary because Loya died of a cardiac arrest.

It is not possible for anyone of us to know whether Loya's death on a wintry night in Nagpur more than three years ago was natural or not. But piecing together all that has appeared in the public domain so far, it is equally impossible to see his death as an isolated incident. On the contrary, the reason a miasma of menace swirls around the controversy is because it has a blood-soaked backstory and a sinister aftermath that is still unfolding.

The first death in this gory saga took place on November 26, 2005, when a Gujarat police team shot dead Sohrabuddin Sheikh. The police initially claimed that he was a terrorist who was cornered by a police party on a highway near Ahmedabad. The alleged terrorist shot at the police who fired back in self-defence and killed him on the spot.

Since many similar 'encounter' killings had taken place in Gujarat since 2002, the police were confident of getting away with their story. But it didn't quite work out that way. Sohrabuddin Sheikh's brother, Rubabuddin, wrote to the Chief Justice of India seeking an inquiry into the death and also the disappearance of Sohrabuddin's wife, Kausar Bi, who had gone missing. The Supreme Court ordered the Gujarat police to investigate the matter.

Sohrabuddin was no terrorist but part of a criminal gang who ran an extortion racket in Rajasthan. He and his gang were patronized by certain police officers and politicians in Gujarat. But fearing that he was getting out of their control, a plot was hatched to eliminate him and paint it as an encounter killing.

The CBI charge sheet and numerous newspaper articles have detailed the modus operandi - how a team of the Gujarat police intercepted the bus in which Sohrabuddin, his wife, Kausar Bi, and an associate, Tulsiram Prajapati, were travelling from Hyderabad to Sangli, pulled them out, and took them away. Prajapati was handed over to the Rajasthan police while the Sheikh couple was kept in separate farmhouses in Gujarat. Sohrabuddin was subsequently killed in a staged encounter four days later.

One murder leads to another and so it was that Death Number Two took place soon after, possibly on November 29, 2005. To quote the CBI charge sheet, "Smt. Kausarbi was an eyewitness to the abduction of Sohrabuddin. She was a dangerous witness... She was, thereafter, eliminated by the accused persons and her body was burnt in village Illol."

The other eyewitness, Tulsiram Prajapati, feared that it would be his turn next. In a panic, he revealed his fears to fellow jail inmates and even wrote to the chairman of the National Human Rights Commission, seeking protection. But his fears proved right. He was brought from Udaipur to Ahmedabad in late December 2006 and on December 28 was killed by the Gujarat police at a highway near the Gujarat-Rajasthan border.

The first three deaths that form Loya's back story were gruesome murders carried out by police teams. According to investigations carried out by both the Gujarat police and the CBI, the teams were operating under the instructions of very senior police officers of the state, who were in turn in close and constant touch with the then Gujarat home minister, Amit Shah.

Amit Shah and several police officers were eventually charged as accused in the extra-judicial killings and sent to jail. The charge sheet noted inter alia, "Investigation also revealed that when the investigation of the case was transferred to CBI by the Hon'ble Supreme Court, there were concerted efforts made to hamper investigation." Amit Shah, it added, directed his close confidantes "to convince, coerce, threaten, influence the witnesses on his behalf to conceal the truth from CBI about the fake encounter of Sohrabuddin."

It is in this backdrop that many citizens - activists, journalists, lawyers - have viewed the death of B.H. Loya with concern and sought an independent probe by petitioning the Supreme Court.

Unlike Sohrabuddin and Prajapati, Loya was no criminal. He had no links with Gujarat or Rajasthan, and only came into the picture when he was appointed the judge in the special CBI court in Mumbai hearing the fake encounter case.

As many have noted, the trial took a new turn after the Bharatiya Janata Party swept to power in May 2014 and Amit Shah was appointed party chief two months later. The first trial judge of the special court, J.T. Utpat, had the gumption to pull up Amit Shah on June 6, 2014, for failing to show up in court and asked him to be present at the next hearing on June 26. But on June 25, Utpat was transferred to another court, even though the Supreme Court had said the same judge should hear the case from beginning to end.

Loya was then appointed the judge. During a hearing on October 31, 2014, Loya, too, asked Shah's counsel to ensure his appearance at the next hearing set for December 15.

On the night of November 30-December 1, Loya, who had gone to Nagpur to attend a wedding, passed away. On December 30, the third judge hearing the case, M.B. Gosavi, discharged Amit Shah from the fake encounter case.

Loya's death went largely unnoticed till the journalist, Niranjan Takle, wrote his article in Caravan magazine in late November 2017 in which he quoted Loya's father and sisters who expressed grave doubts about the 'cardiac arrest' theory, and gave disturbing details of the circumstances of the death. That article and its follow-ups triggered an outcry that has led to the petitions currently being heard in the Supreme Court.

More murky details are now emerging. On January 31 this year, the Congress held a press conference where a Nagpur-based lawyer and activist, Satish Uke, made startling allegations. He said two friends of Loya - the lawyer, Shrikant Khandalkar, and the retired district judge, Prakash Thombre - had approached him on the judge's behalf in 2014. They told him Loya was facing tremendous pressure in the fake encounter case.

According to Uke, the three of them held a video conference with Loya where he said he had been sent a draft order and asked to sign it. He was disinclined to do so, but also afraid of the consequences of being upright.

Soon after, Loya met his untimely death. Uke's words could be dismissed as outlandish but for what transpired later. Khandalkar, Uke said, called him in October 2015 to say that he too was getting death threats. Khandalkar's body was found in the premises of the Nagpur district court on November 29 with no clarity on how he died.

A little over six months later, Prakash Thombre also met an 'accidental' death. He apparently fell from the upper berth of a train and broke his spine. Uke missed death by a whisker when an avalanche of iron rods smashed his office shed minutes after he exited.

And in tandem with the mystery deaths, as many as 33 of the 49 witnesses in the fake encounter case have turned 'hostile', the last three as late as last week. And 15 of the key accused, starting with Amit Shah, have been discharged, prompting the retired judge of the Bombay High Court, A.M. Thipsay, to openly question the "absurd inconsistencies" in the trial process.

In the hands of a master story-teller, the fictional detective always succeeds in bringing together disparate strands of an intricate plot to offer the reader a satisfying resolution in the end. That might be too much to hope for in this real-life mystery involving people in the highest places...