Advertisement
Home / Opinion / One for all

Against ‘Us versus Them’ 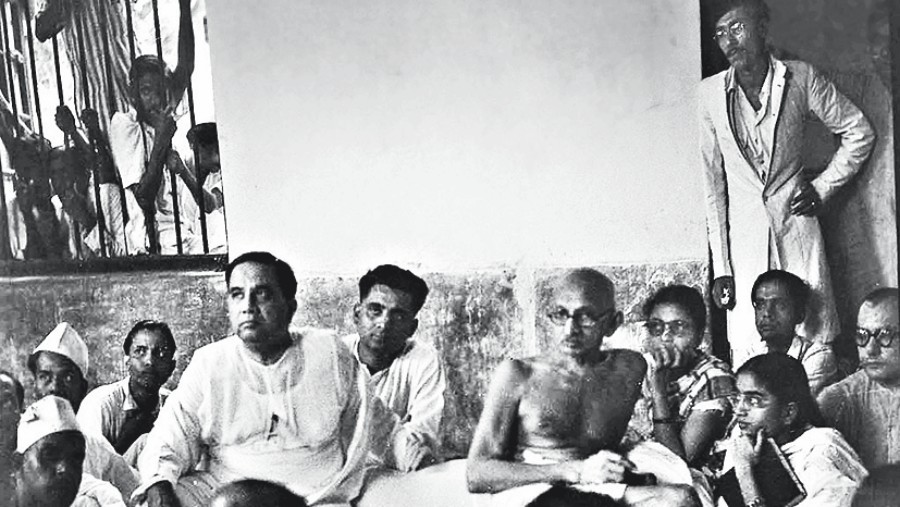 Nature, a perceptive thinker has said, is always ahead of the avant-garde. Which is to say that even the ‘advance guard’ of artists and writers which thinks and expresses things before others do is behind nature. Art can be daring, writing audacious. For sheer originality, however, nature is not to be overtaken.

Human nature, likewise, may be said to be ever ahead of those who try to understand it or dare to shape it. M.K. Gandhi, who tried to do both, has, not surprisingly, been described as one who was ‘ahead of his time’. I am not sure if anyone can, in the linear logic of chronology, ever be ahead of his time. But studying human behaviour as thoroughly as he did, ‘in foul weather and fair’, Gandhi had acquired the knack of anticipating collective responses to events and then either encouraging or resisting those responses.

He knew in his bones that India’s struggle for freedom was a historical imperative and did all he could to take it forward. He knew likewise in the pulse of his being that partitioning India was wrong and did all he possibly could to avert it. He along with Khan Abdul Ghaffar Khan knew that communal divisiveness would outlast the drawing of the Radcliffe lines. So much so that in the embers of 1946, while the subcontinent prepared itself for the transfer of power, he, with Ghaffar Khan, made sure that where the fires would rage — along the borders of the two coming-to-be dominions — they would be. As the “one man boundary force” (Lord Mountbatten’s description of him) that he became, Gandhi could not extinguish those fires but he did succeed in dousing innumerable flames — with the help of some incredible volunteers in the same cause, like Sachin Mitra and Smritish Banerjea of Calcutta who died by standing between two rioting mobs.

Gandhi was in Calcutta in August 1947 to head for Noakhali where he had promised to return to quell the still-smouldering embers of violence against the minority Hindu community there. But the situation in the city was so explosive that its anxious residents, starting from Governor Frederick Burrows and the outgoing and incoming heads of government —Shaheed Suhrawardy and Prafulla Ghosh — to citizens’ groups, prevailed on him to remain among them awhile. He agreed provided he was enabled to stay in one of the city’s most endangered suburbs — Beliaghata was chosen — with Hindus working for the safety of that area’s, and the city’s, Muslim residents. He also asked the Muslims who had urged him to remain in Calcutta to do what they could to protect Hindu lives in East Bengal. These conditions accepted, he stayed in the city.

Calcutta was tense beyond imagining at ‘the midnight hour’. But Gandhi’s presence was a balm and Suhrawardy, with Direct Action Day of the previous August haunting his conscience, stayed by his side in what now seems like a combination of motives — self-protection, expiation, admiration. On the evening of August 14, 1947, Suhrawardy took Gandhi on a drive through the city to show him the peace and camaraderie prevailing — doubtless with a view to saying wordlessly ‘See Gandhiji, this is the composed city I am handing over to Prafullababu’. All hell was to break loose in Calcutta not long thereafter but, for the while, there was calm.

On this day — August 23 — in 1947 Gandhi woke as was his practice in his Beliaghata camp-house at 3.30 a.m. and after his morning quiet and in-house prayers spent time writing letters and then went for his pre-dawn walk, barefoot. “This reminds me of Noakhali,” he told Manu and Abha (his grand niece and grand niece-in-law). Except for an interval of half an hour to eat and an equal time for rest, he worked on papers until 2 pm when he gave interviews, mainly to volunteers, until 5 pm when he went for a prayer meeting open to all, held at ‘Woodlands’, the spacious garden-residence of the Maharaja of Cooch Behar. I do not know if there is a plaque at the hospital with the same name that stands today on that spot to commemorate that prayer meeting but there ought to be one. For just this reason that what Gandhi said that evening in Hindi at that congregation reads like it could have been written — ahead of the times — for us today.

The Maharaja and his family were all present there with the great throng, as was Major General Shah Nawaz Khan of the Indian National Army. It was, in other words, a Hindu-Muslim gathering, just the kind that Gandhi would have liked to be with at that time.Manu has recorded in her diary entries published as Miracle of Calcutta (Navajivan, 1959): “Bapu spoke on unity”. Little else need be said. But she does more. She transcribes the words he spoke. They are worth reading verbatim in the following English rendering: “(Bapu said) Hindus should not object to the shouting of ‘Allahu Akbar’, nor should the Muslims object to ‘Vande Mataram’. The two slogans are however somewhat different. ‘Allahu Akbar’ means ‘God is Great’. What does it matter if the slogan is in Arabic? Is it sinful if it is in a foreign language? And ‘Vande Mataram’ means ‘I bow to our beloved Mother India’. Is anything wrong in this?”

Gandhi then goes on to say something which all those who were viewing the proceedings at Ayodhya on August 5, 2020 on different screens should have heard: “But these days our minds are much confused. If your hearts are one I suggest that Musulmans should be free to worship Mother Kali and Hindus should go to the Masjid with equal freedom.”

It is extremely unlikely that any Musulman hearing him would have wanted to worship Mother Kali or would want to do so today. And I do not know if many Hindus in that congregation would have wanted to go to mosques to pray or would want to do so today. But the far-seeing and foreseeing Gandhi knew that the spirit behind what he was saying, the idea underlying his spoken words, was sinking into those who were hearing him. And was crucial if India was to be and feel one as in ‘We the people of India...’ He knew that India has always had its discords, its communal divides and there will always be people who will turn their heads away when someone says Allahu Akbar and others who will do the same when they hear Vande Mataram. But then there will also be those many who will see the folly and the danger of that. He knew that Hindus and Muslims may not worship (or be permitted to worship) in each other’s shrines but that there will be many who will respect those shrines and the worship that takes place in those shrines not because they are their shrines but because they are sites of prayer and worship.

For Gandhi, a temple was not Hindu nor a mosque Muslim. It was, like any chapel, an agiari, synagogue, chaitya or gurudwara, a place where god, not egos, dwelt. And where men and women went to seek light, not power. Which is why in the Ashram Bhajanavali that he inspired Pandit Narayan Moreshwar Khare to compile for the morning and evening prayers at Sabarmati Ashram, he included texts from all the major religions of the world as also the full song of which, years later, the major part was to become our national anthem. That song, in its unabridged form, has the line: “rakkha karile anke snehamayi tumi mata — Loving as you are, Mother, protect us, save us!”

That is what the avant-garde student of human nature in him saw us as — an us, with hearts that are one, needing our loving mother’s — India’s — protection from the ugly and the base in the same us. And that evening on August 23, he said what he said in a maharaja’s palace which is now a hospital where, as in countless other hospitals, stricken men and women and children come to be protected, saved, irrespective of what and where they worship or worship anything at all.

The fourth pillar: No fear