On the leftward shift of the United States of America 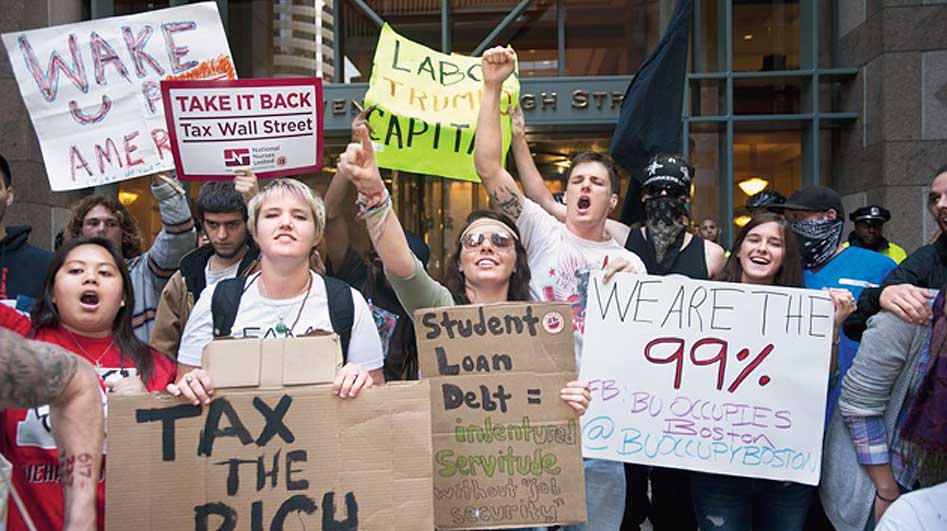 Over the last few decades, the US economy has been afflicted by an ailment — inequality. Not only is income inequality rising in the United States of America, it is also higher than in other advanced economies. Comparisons of income inequality across countries are often based on the Gini coefficient, which can take a value ranging from 0 to 1 — from perfect equality to complete inequality. According to the Organisation for Economic Cooperation and Development, the Gini coefficient in the US stood at 0.434 in 2017. This was higher than in any of the other G-7 countries, in which the Gini ranged from 0.326 in France to 0.392 in the United Kingdom, and closer to the level in India (0.495). Another way to interpret this statistic more starkly is to note that the wealth gap between America’s richest and poorer families more than doubled from 1989 to 2016. In 1989, the richest 5 per cent of families had 114 times as much wealth as families in the second quintile ($2.3 million compared with $20,300); by 2016, this ratio had increased to 248, a much sharper rise than the widening gap in income.

The rise in economic inequality in the US is tied to several factors. These include, in no particular order, technological change, globalization, the decline of unions and the eroding value of the minimum wage. Whatever the causes, the uninterrupted increase in inequality since 1980 has caused concern among members of the public, researchers, policymakers and politicians.

Why does inequality matter? One reason is that rising inequality may cause people in the lower rungs of the economic ladder to experience diminished economic opportunity and mobility, a phenomenon referred to as the Great Gatsby Curve. Others have highlighted inequality’s negative impact on the political influence of the disadvantaged, on geographic segregation by income, and on economic growth itself. In light of these headwinds caused by increasing inequality, it is heartening that the Joe Biden administration has — at last — taken it upon itself to make a course correction to this trend.

Before analyzing what the current US government is doing, let me briefly look back on how the US came to this state. After World War II and the Great Depression, when the world economy was devastated, the US under the then president, Franklin D. Roosevelt, took an unprecedented policy initiative called ‘The New Deal’. The New Deal was a series of programmes to solve the problems caused by the Great Depression, including unemployment and agricultural overproduction. The most significant contribution of The New Deal was over the role of government. Should the government direct investment more actively? Should it redistribute far more money to the disadvantaged for the sake of common decency and to restore social cohesion? The New Deal was a set of domestic policies that dramatically expanded the federal government’s role in the economy in response to the Great Depression. The new administration’s first objective was to alleviate the suffering of the nation’s huge number of unemployed workers. Government agencies were established to dispense emergency and short-term governmental aid and to provide temporary jobs, employment on construction projects, and youth work in the national forests. The New Deal also tried to regulate the nation’s financial hierarchy in order to avoid a repetition of the stock market crash of 1929 and the massive bank failures that followed. The Federal Deposit Insurance Corporation granted government insurance for bank deposits in member banks of the Federal Reserve System and the Securities and Exchange Commission was formed to protect the investing public from fraudulent stock-market practices. Perhaps the most far-reaching programmes of the entire New Deal were the Social Security measures enacted in 1935 and 1939, providing old-age and widows’ benefits, unemployment compensation, and disability insurance. Maximum work hours and minimum wages were also set in certain industries in 1938. One could argue that this was a significant reason for America’s rise to an economic powerhouse after the devastation caused by the Great Depression. It was an all-encompassing set of policy initiatives, which addressed the inequality impact of unfettered capitalism.

This trend started waning in the 1970s, given the intellectual influence of right-wing economists spearheaded by Milton Friedman. His influential economic paradigm criticizing the role of the government in economic policies was picked up by Ronald Reagan in the 1980s when he famously commented that the “government is not the solution to our problem, government is the problem”. This policy shift led to the lowering of taxes, removing government subsidies and welfare programmes which, in turn, created the basis of the rising inequality in the US. This general economic paradigm, with minor exceptions, has largely been the focus of US economic policy-making. But since the financial crisis of 2008, more and more Americans have concluded that the American system needs fundamental realignment. Republican and Democratic presidents, from Jimmy Carter through Barack Obama, worked within the parameters of the American system, but a new generation in the country, raised amid the financial crisis, wants to smash the ‘neoliberal consensus’. This intellectual shift in the Democratic Party — starting with the young but now encompassing most of the establishment — is what is driving Biden to do so much so fast, and it will continue to drive him throughout his presidency. One should view Biden’s policies in that backdrop.

I shall mention three important aspects in which the Biden administration is trying to reverse the above trend of the last few decades. Given the impact of the current pandemic, he has undertaken two major initiatives in recent months which significantly brought the government to the rescue of the economy. On March 12, Biden signed a $1.9 trillion Covid-19 relief act into law. Just 10 days later, he pushed a $2.3 trillion package of jobs, clean energy and infrastructure proposals. Very importantly, the infrastructure bill is to be paid for by raising the corporate tax rate from 21 per cent to 28 per cent, which would raise an estimated $2 trillion over 15 years and demonstrate to financial markets the intention to control the huge rise in government debt that is underway. The administration’s international economic plans are even bolder. They include measures to eliminate international tax havens, a global minimum corporate tax rate of 15 per cent to discourage companies from moving to countries where taxes are the lowest. Republicans are trying to stop the president from reversing the tax cuts for high earners and corporations in Donald Trump’s tax law. Currently these issues are being hotly debated in the US Senate and surely some of Biden’s measures will be hard to enforce but the intent is clear.

The other important area where Biden has taken bold initiatives is on the role of the worker unions which has been argued as a major source of the rising inequality. Union membership has declined precipitously in the US and accounted for about 10.8 per cent of US employees last year, half the rate in 1983. Biden issued an executive order establishing the White House Task Force on Worker Organizing and Empowerment, a move that aims to help unions expand their ranks. The White House also issued a fact sheet, saying that Biden’s proposed $2.3 trillion infrastructure plan would create many union jobs in construction, clean energy and other fields by, for instance, requiring companies that receive money under the legislation not to oppose unionization efforts. Biden has vigorously supported the Protecting the Right to Organize Act, the most pro-union legislation to advance in the Congress since the 1930s. Among other things, the ‘Pro Act’ would take away some of corporate America’s most effective tactics in fighting unionization and give state and local employees in all 50 states the right to unionize. In this way, Biden is undertaking an extraordinary effort to help reverse the decades-long decline in labour unions’ membership and power.

Finally, Biden signed an executive order that requires federal contractors to pay a $15-an-hour minimum wage. Currently, the minimum wage for federal workers is $10.95 per hour and the tipped minimum wage is $7.65 per hour. The Minimum Wage legislation was started by Roosevelt in 1938 as part of the New Deal where he famously intended this rate to be “more than a bare subsistence level”. The minimum wage was created expressly to ensure that people of all skill-levels, if they worked, could “earn a decent living” off those wages — thus, a living wage. Over the last few decades, this has been a bone of contention and a serious political issue in the US.

This ‘leftward’ shift of the Biden administration is very illuminating given it has implications for other world economies too, namely India, where inequality is currently one of the highest in the world.