If a gentlemen’s 'adda' in a gentle neighbourhood can erupt in such fury, why blame a nation for crying war? 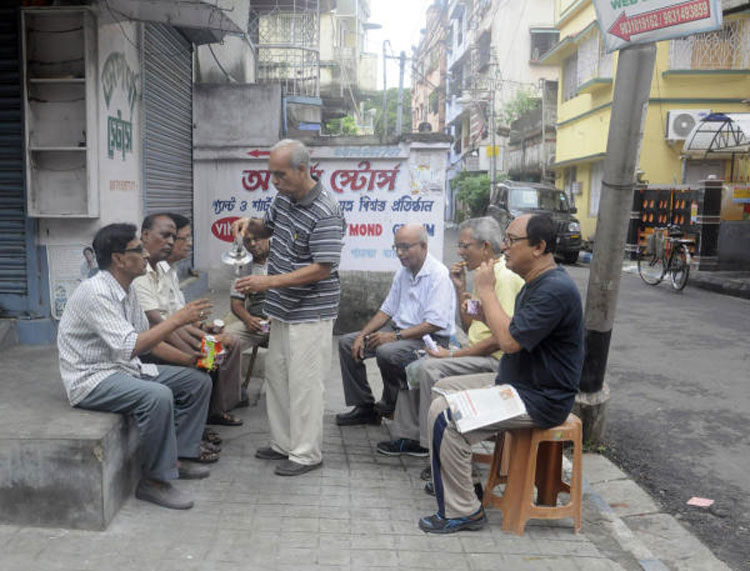 A few regulars of a certain vintage get together for longish bouts of 'adda', once in the morning, and once after office.
Telegraph file picture
Chandrima S. Bhattacharya   |   Published 15.03.19, 10:27 AM

A corner sweet shop in our neighbourhood, famous for both its mishtis and savouries, remains stoutly old world. The old-fashioned counter, open to letting in neighbourhood flies every now and then, is manned in an old-fashioned manner. The men behind it take a long time in noticing you, and when they do, they do so with a mild annoyance, or at best, surprise. Only one person, a gentle, quiet young man, is the exception.

The shop also lets in neighbourhood men. A few regulars of a certain vintage collect in front of it for longish bouts of adda, once in the morning, and once after office. If you Photoshop, or better, delete, the ugly multi-storeyeds that have replaced the old buildings in the neighbourhood, the scene may even inspire a strong burst of nostalgia.

But the conversations are quite contemporary, as they should be. I was privy to one recently. The evening adda was in progress and I, who wanted to buy some mishtis, was being subjected to the usual long indifference at the counter. I, in turn, stood watching the sweets intently. I had no choice but to listen to the rather boisterous conversation going on.

It was about politics, but it took a sudden turn. One from the adda group spotted the gentle soul at the counter. The following exchange happened, entirely in Bengali, parts of which I will either reproduce or translate to the best of my ability.

“You! What were you up to last evening?” the adda member asked the man at the counter.

“I? What did I do?” asked the man at the counter, completely bewildered.

“But what was I doing?” asked the man at the counter, looking a little frightened.

“What were you doing in that lane?” roared the adda member.

The man at the counter began to see something.

“What were you doing with that person in that lane at that time?” the adda man charged again. Since he was using the Bengali pronoun “o”, it was not clear what the gender of the person with whom the man at the counter was allegedly seen was.

“We were just walking together,” the man at the counter said.

“You were walking? At that time in that lane you were walking? What business had you to walk at that time of the night? It was past nine!” The adda member was becoming more excited with each question he was asking. His face was livid and he was shaking.

The young man at the counter was paralysed with fear. He had lost his ability to speak.

At that point, when I thought someone would ask what right the adda member had to ask the young man a single question, all the adda members threw in their lot with the shaking one.

“Thik bolechho,” said another adda member to the leader. “You are right. Or boro bar berechhe. He is crossing all limits,” he said.

Then the violence escalated. The adda men began to shout together and decided that the young man needed to be taught a lesson. What he had done was an act of transgression that was as unnameable as it was unnamed. I almost felt I was about to witness a mob descend and lynch a man. His fault was the fault of many victims of mob violence: he was just being himself, for which he had to be punished.

Anyway, they decided to spare him. “Er por jodi kono din aar dekhi tahole ek thappor mere tor ghar bhenge debo,” said the adda member who had taken the lead in the attack. “If I see you there once more I will slap you so hard that your neck will break,” he announced and looked proudly around him, satisfied with his performance.

So the war cries on WhatsApp groups when India struck at Pakistan after Pulwama were entirely in proportion. If a gentlemen’s adda in our gentle neighbourhood can erupt in such fury, why blame a nation for crying war?