A canonisation and a controversy 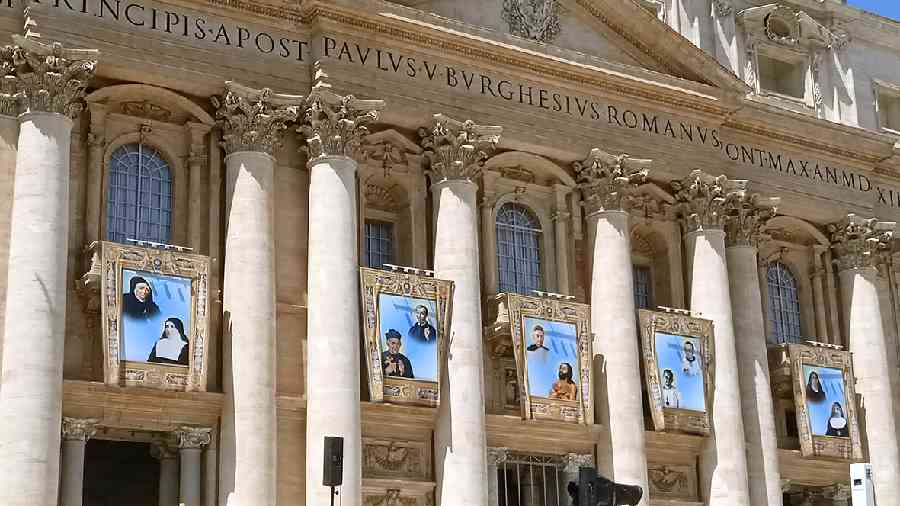 A tapestry depicting Devasahayam (centre) in St Peter’s Square, The Vatican, during his canonisation
Sourced by The Telegraph
M.G. Radhakrishnan   |   Published 25.07.22, 03:48 AM

On May 15, Pope Francis canonised Devasahayam Pillai (1712- 1752) of Kanyakumari in Tamil Nadu as India’s first layman saint of the Roman Catholic Church. About 50,000 faithful from across the world attended the canonisation mass held at St Peter’s Basilica in the Vatican. He would now be known as Martyr Saint Devasahayam as his Hindu caste surname, Pillai, was dropped by the Vatican after approving his sainthood in 2020. Devasahayam would be the eighth India-born Catholic saint of the modern era and the first who was not ordained as church functionary. Devasahayam has been referred to as a “martyr for the cross” and “saint of the subalterns”. Nine others, including four women from various countries, were canonised along with Devasahayam. The canonisation came at the culmination of a process that began with a request made by the Latin Catholic Church’s Diocese of Kottar (Devasahayam’s native region), the Tamil Nadu Bishops’ Council and the Conference of Catholic Bishops of India in 2004. While Devasahayam was declared “blessed” in 2012 as a prelude to being canonised, Pope Benedict XVI urged Christians to “join in the joy of the Church in India and pray that the new Blessed may sustain the faith of the Christians of that large and noble country”.

A proud moment indeed for Indian Catholics. Yet, the canonisation has kindled a major row between the Vatican and the erstwhile royal family of Thiruvithamkoor (Travancore). Two former princesses, Gouri Lakshmi Bayi and Gouri Parvathi Bayi, have now written to the Pope that they were deeply anguished by the sustained campaign against their illustrious ancestor, Maharaja Marthanda Varma (1706-58), the maker of modern Thiruvithamkoor. According to the Catholic Church, Pillai was arrested and killed at the behest of upper castes under the Maharaja’s order for converting to Christianity and opposing the discrimination against the lower castes. The former princesses wrote to the Pope that though they had no objection to Pillai’s canonisation, he was punished for treason and not for embracing Christianity or standing up for the lower castes. According to them, Devasahayam’s “association with the enemies of Travancore like the Dutch and disloyalty to the Crown could never have been condoned.

Against Devasahayam, there were other allegations of serious nature, which we are intentionally avoiding”. The former princesses are the nieces of the late Balarama Varma (1912-1991), the last Maharaja of Thiruvithamkoor, which became part of the new Kerala state in 1956.  Devasahayam was originally Neelakanta Pillai, born to a Hindu upper caste family in present-day Kanyakumari district, Tamil Nadu, which was then part of the Thiruvithamkoor kingdom. Converted to Christianity in 1745, Pillai took the name, Devasahayam (Malayalam for Lazarus), and preached about the discrimination against lower-caste Hindus.  Pillai was an official at the Maharaja’s palace and was converted and baptised at the behest of Eustachius De Lannoy, the famed Belgian commander of Marthanda Varma and a committed Roman Catholic. De Lannoy was a captain with the Dutch East India Company’s army who was captured by the Thiruvithamkoor army when it defeated the Dutch forces in the historic Battle of Colachel near Kanyakumari in 1741. It was one of the rare instances of a tiny Indian principality’s army beating the Dutch East India Company — the Vereenigde Oostindische Compagnie — the world’s mightiest naval force of the period. Varma made his celebrity prisoner of war his commander in chief, who modernised Thiruvithamkoor’s army on the European model and introduced gunpowder and modern fortification techniques. This made Varma one of the most powerful rulers of southern India and expanded Thiruvithamkoor from a tiny principality to a major kingdom.

The former princesses have pointed out to the Pope that the Thiruvithamkoor royalty had never indulged in religious persecution. They have also quoted documents showing letters penned by Pope Clement XIV in 1774 and Pope Benedict XV in 1917 thanking the then Maharajas of Thiruvithamkoor for their “benevolence, kindness and equity” shown towards the Christians. The former royals have not yet received any response from the Holy See.

However, the princesses’ claims are at variance with official documents of the Thiruvithamkoor royal government. The Travancore State Manual of 1906, authored by the then royal government’s Dewan, V. Nagam Aiya, says about Devasahayam; “Four years after he was imprisoned because of his change of religion and after three years of imprisonment, he was shot dead in 1752 by the order of the Raja at Aramboli about fifty first mile on the road from Trivandrum to Tinnevelly. His corpse was thrown into the jungle, but the Christians got possession of the corpse, burned it, and buried the ashes at a tomb which still exists in the Church of St. Francis Xavier at Kottar.”

Undeniably, these regions of Thiruvithamkoor had witnessed widespread conflicts during this period between upper castes and Christian missionaries after they mobilised the lower castes not only to convert them but also rise up to assert their long-suppressed human rights. The breast cloth movement of 1813-59 for the rights of backward caste (Channar) women to cover their breasts was legendary.

After the royal family’s protest, the local Latin Catholic Church has come out with strong rejoinders. Local newspapers have quoted Ignatius Thomas, a committee member for the Beatification of Devasahayam, saying the canonisation was decided after meticulous research that lasted three decades. According to him, there was strong evidence of religious persecution in Thiruvithamkoor in the 18th century and if not the king, most of his high-ranking officials, including his chief minister, Ramayyan, were bigots. The primary document considered by the Vatican for Devasahayam’s beatification was a letter written by the local Bishop of Angengo, dated November 15, 1756, to Pope Benedict XIV that mentioned Devasahayam’s martyrdom at the hands of the upper castes. Thomas also cited a petition submitted by a Catholic priest to Marthanda Varma’s successor to stop atrocities by upper castes against the backward castes who had converted to Christianity.    The Hindu groups have long been opposing the Church’s statements that Devasahayam was killed for speaking up against the discriminatory practices inside Hinduism. C.I. Issac, a member of the Indian Council of Historical Research and vice-president of the Bharatiya Vichar Kendra, wrote on the website, Bharata Bharati: The Hindu Perspective, “The forces of the Conversion Lobby is now experimenting with another strategy to bestow the halo of sainthood upon a traitor, Neelakanta Pillai, of the kingdom of Travancore. This 18th-century convert is now being repackaged as ‘Devasahayam Pillai’ in the absence of any proper historical evidence, in order to build an icon of martyrdom to the cause of faith.”

The royal family and the Hindu groups may have their axes to grind. Still, it is amusing that the Vatican continues with archaic canonisation procedures even after the radical transformations in its perspectives brought about by Pope Francis. Known as the most modern among Holy Fathers for his radical perspectives on a range of issues — inequality, homosexuality, gender justice, climate change — even Pope Francis had to abide by the mandatory miracle clause for canonisation. According to CatholicSaints.info, the miracle attributed to Devasahayam’s intercession is this; “A 24-week fetus who stopped moving and whose heart stopped beating in India in 2013; the mother, who was Catholic and had a devotion to Blessed Lazarus, began praying for his intercession for the baby; within an hour, she felt the baby kicking, tests showed that the heartbeat had resumed, and the infant was later born with no complications.”

M.G. Radhakrishnan, a senior journalist based in Thiruvananthapuram, has worked with various print and electronic media organisations