NRC: The inversion of accountability

Instead of elected representatives being accountable to the people, some citizens must now account for just existing 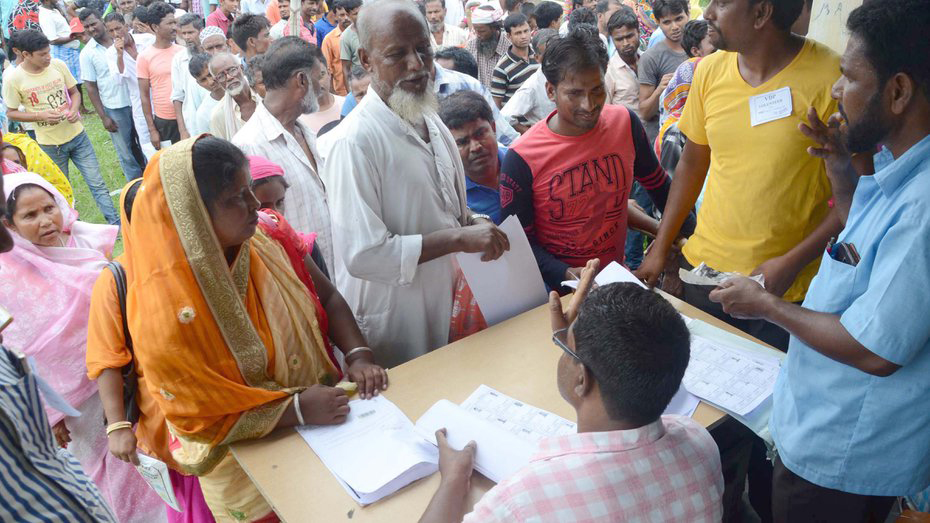 People line up to get their names checked in the draft NRC in Tezpur, Assam. The spectacle of the NRC updating in the state has been bewildering enough, and the sudden uncertainty facing over 19 lakh people after the final list is terrifying.
Telegraph file picture
Bhaswati Chakravorty   |   Published 25.09.19, 06:52 PM

One more one from Amit Shah: Now it’s identity card

A gentle, law-abiding man asked me, “What will they demand for this ‘NCR’ thing? People have told me they will ask for my grandfather’s grandfather’s land records, but I have no land. My father has written off the piece of land we had to my nephew.”

I did tell him that no one would ask for such land records and that he should relax; the National Register of Citizens has not been announced in West Bengal. But I could not tell him that illogical things do not, cannot, happen. He was responding to a special kind of terror that is not spread by identified terrorists. It results from the nurturing of oppressive fear, wielded as a weapon by those who wish for full control over people’s minds and actions, a control that has nothing to do with mutually respectful governance. While I tried to calm my interlocutor, I was thinking immediately of ‘proofs’ that I might need to validate my claim as an Indian citizen. My thoughts were being dictated by an invisible force generated by the gathering momentum of recent events — I could not imagine any time before this when I would be pushed to accounting for my existence, that too in my own country, as though I were a criminal unless proved otherwise.

This inversion of accountability — not the people’s representatives but the people, individually, must be accountable, unless they bow to the Bharatiya Janata Party and its cousins and uncles — is accompanied by a contagious fear that infuses even routine procedures with looming significance. The yearly checking for names on electoral rolls began in early September. This time it has caused a mad scramble for the nearest computer, with a rumour that the programme will close soon. This is the last chance to ensure inclusion in the NRC. Little nudges from anonymous WhatsApp messages stating that, after this, exclusion will be on the individual’s head was brilliant. Yet the Election Commission goes through this exercise every year; it is not meant to compel citizens to live in perpetual fear.

The fear of not having the correct papers has allegedly led to eight suicides in the northern districts of the state. That the updating of the NRC in Assam — whatever the actual outcome of the latest exercise — was based on the Assam Accord of 1985 is now lost amid a panic of such a scale that the state government is being forced even to declare that the digitization of the ration card has nothing to do with the NRC. Accompanying the panic is the rush of activity. A rush to check the registration on electoral rolls, panic that ration cards will not be digitized after a certain date and we will all be herded into detention camps inside prisons — anxiety, disruption, and a sterile busyness are created to kill the scope for reflection.

That none of this is innocuous is indicated by the Union home minister’s mooting of another identity card. The frenetic activity over Aadhaar with repeatedly postponed last dates and the prolonged agony of do-we-need-it-don’t-we-need-it are too recent to be forgotten. The Aadhaar phenomenon represents one of the typical reasons behind the growth of unreasoning fear. When the Supreme Court at long last did pronounce that it was not mandatory for anything but direct benefits, almost every single official agency in a citizen’s life had forced individuals to submit Aadhaar details upon pain of refusing service. The fears about exposure of private data were ignored. And in spite of the court, organizations such as banks continued to demand Aadhaar details — following ‘orders from the top’. The familiar relationship between the court and the rest of the polity seemed no longer valid; there could always be direct ‘orders from the top’, unchecked, to whoever the ‘top’ pleased to order. This rupture of the inner logic of administration by which transactions between the citizen and institutions followed certain rules based on rights and duties is somewhat like having the ground pulled away from beneath. It encourages the feeling that anything can happen: you better keep following every new rule every new day, or else.

This disorientation is now part of daily life. I was told, for instance, that I would have to ‘do my KYC’ at my gas booking office. But I get my gas at the market rate; I could buy a cylinder off the shelf. Therein lies the rub. There is no gas on the shelf for me to buy. In this mad world, in which we, the citizens of India, are pleading for the legitimacy of our existence at every single moment with this OTP and that KYC, the home minister throws in the suggestion of a kind of holdall card. So why Aadhaar? Does the unique identification not make us enough of a citizen? Or is it just a little joke, aimed at making people leap to get their ever-increasing papers together, desperately asking what will be needed, and cowering in case they miss the announcement of the crucial last date? No time to linger on the way to enslavement to a feverish mindlessness.

The spectacle of the NRC updating in Assam has been bewildering enough, and the sudden uncertainty facing over 19 lakh people after the final list is terrifying. For one, the BJP has made it clear that the results of the NRC listing are not what it hoped for, that is, not enough minority community members have been found wanting. Whatever may lie behind that, the outcome has left some people from both communities virtually stateless. What does it mean when the Rashtriya Swayamsevak Sangh chief — speaking on whose authority? — says that no Hindu need fear the NRC? What does it mean when members of BJP-led governments say that this is not the final list? When the exercise began there was talk of deportation, yet Bangladesh was told that this was an internal matter. Will all the 19 lakh people be housed forever in detention camps if they cannot prove their State? When the unreason that legitimizes the violation of the most basic human rights becomes part and parcel of governance, there is reason for fear. But, also, the greatest reason for resistance.

Alongside Assam looms Kashmir. Many political parties and most of the media have declared that the country is celebrating its bifurcation and the abrogation of Article 370: it is the best thing that could happen — most of all to Kashmir. That is a matter of opinion, or of history, of law, or dreams and betrayals, warping pressures and warring perceptions. What is not a matter of opinion is that Kashmir has been virtually ‘locked down’ for more than 50 days, most of its communication media still suspended — mobile telephones and internet are only useful to terrorists, the governor has said — and its political leaders of all hues, including those pro-India, are under lock and key. The state was divided into two Union territories at the same stroke, without consent, discussion, or possibly even knowledge of the state’s inhabitants before it happened. Pleas from different Kashmiri bodies, including the media, referring to the suspension of civil liberties — even movement — and of the inaccessibility of the Jammu and Kashmir High Court have been heard in the Supreme Court. The high court has stated that it is not inaccessible and the Supreme Court has asked the Centre for an affidavit to show what it is doing to restore normalcy, even if partially.

Does celebrating the demolition of Kashmir’s ‘special status’ for whatever reason also mean the obliteration of all questions about the democratic rights of our own countrymen, about the lawfulness of pre-emptive imprisonment of former chief ministers and other senior politicians, about the limiting of media exposure in what is not a war zone, about the number of habeas corpus cases piling up that overturns the rationale of the relevant law itself? A deafness and blindness, a selective amnesia about the lessons of democracy and federalism, of the history of the world, seemed to have seized a majority of Indians. Some aspiring tourists are even disappointed that tour operators are cancelling trips to Kashmir: why on earth? No one’s died there, have they?

A driving fear, the craze for ever-burgeoning documentation and a mind closed to silenced fellow citizens — sound familiar?