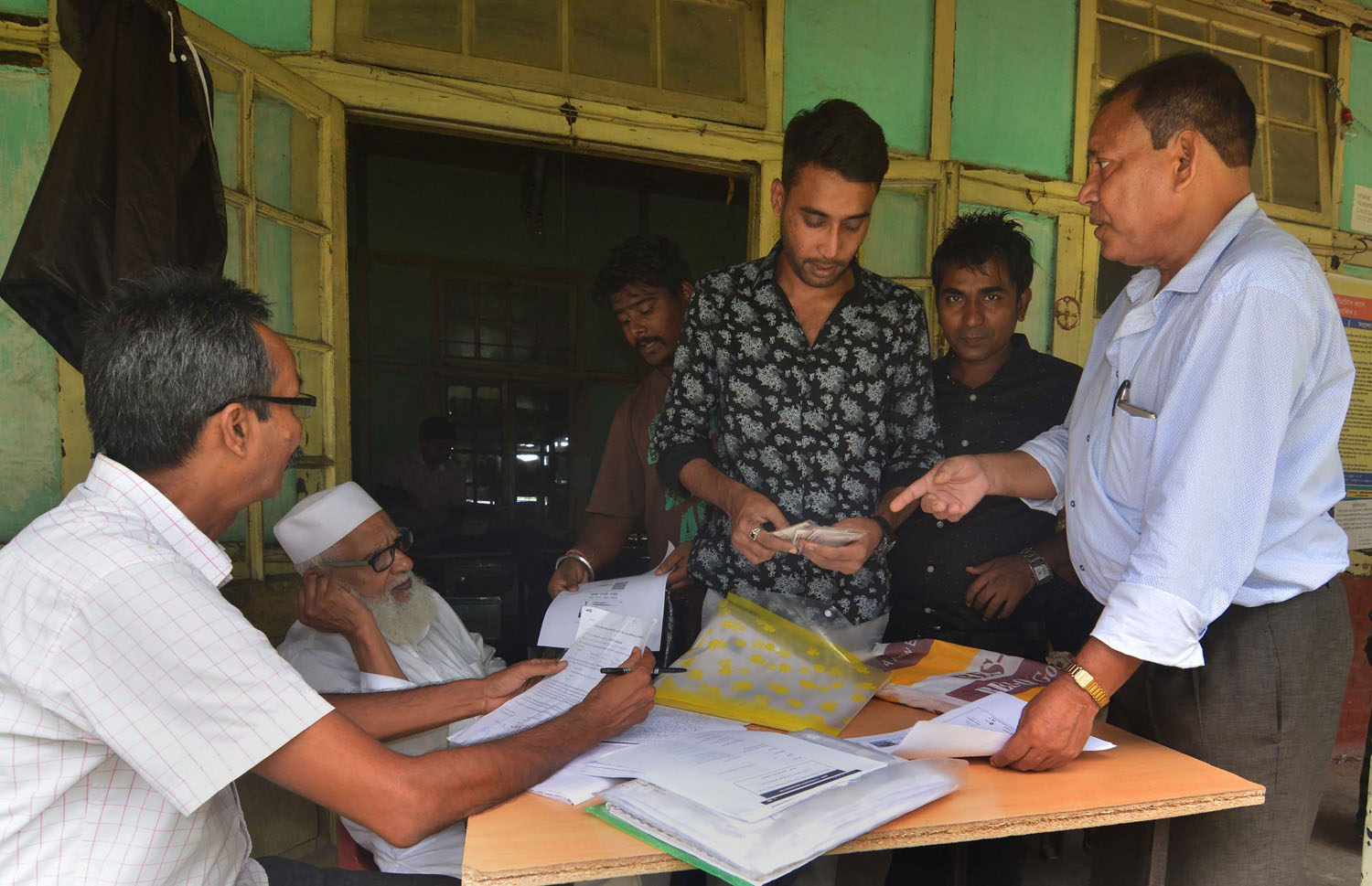 People undergo a verification process for the National Register of Citizens in Guwahati, Assam, on Wednesday, June 26, 2019. The normalization of mob violence against minorities can only be a preliminary to the the real substance of a Hindu rashtra, namely the legitimization of formal discrimination
(PTI)
Mukul Kesavan   |   Published 28.07.19, 03:27 AM

A friend, demoralized by the Bharatiya Janata Party’s emphatic victory in May, said ruefully that Narendra Modi could now write Annihilation of Caste, given how decisively his party swept Uttar Pradesh despite the subaltern caste mosaic pieced together by Mayawati and Akhilesh Yadav. Having suggested in print on the eve of the election that the mahagathbandhan might be the fulcrum on which India’s politics might turn, I could only nod.

The 2019 elections were won in the name of Hindu nationalism. There might have been some strategic ambiguity to the BJP’s 2014 campaign but the pitch five years later was explicitly majoritarian. Returned to office with a larger absolute majority than it had before, the BJP will believe, with some reason, that it has a popular mandate for its vision of a Hindu rashtra. In Modi’s second term, the BJP and its affiliates will create the institutional architecture for an explicitly majoritarian State.

Asim Ali, a research scholar in Delhi University, recently wrote a sharply reasoned piece called “What If This Is the Hindu Rashtra?” He argued that India today was a de facto Hindu State given the impunity with which vigilantes attacked Muslims and other minorities. The complicity of the media, the campaigns of violent intimidation, the operation of the National Register of Citizens, the marginalization and demonization of Muslims in public life, the hesitation of Muslims, often, to even disclose their names, added up, in Ali’s view, to a Hindu country where Muslims were fearful second-class citizens. “India might not be Hindu rashtra yet for the liberal intelligentsia, but for the Hindutva stormtroopers roaming the streets, this is the Hindu rashtra.”

It’s hard to argue against this conclusion in a country where Narendra Modi is the prime minister, Amit Shah its home minister, and Adityanath the chief minister of its largest state. This is a triumvirate of the extreme right that you would need to recruit across nations to match. Vladimir Putin, Erdogan and Khamenei might begin to measure up as majoritarians and/or extremists but neither Trump nor Boris Johnson, those bête noires of Western progressives, would even make the cut. Nevertheless, the answer to Ali’s question must be no.

It must be no because to name India today as a Hindu rashtra is to underestimate the potential monstrousness of a Hindu State. Ali’s argument turns on the meaninglessness of the distinction between formal and substantive discrimination and inequality. Given Modi’s success in creating a ‘Muslim mukt’ or Muslim-free politics and the latitude given to murderers and vigilantes over that first term, the temptation to say that a fascist State can live and breathe in democratic motley is real. But it is one we must refuse because a Hindu rashtra, like any fascist State, needs rules, structures and systems to consolidate itself.

The BJP’s single greatest achievement in the first five years was to consolidate its pan-Indian presence while remaining true to its largest ideological commitment: the marginalization of Muslims. Some part of the latter goal was achieved by being tolerant of and complicit in vigilante violence. The lynching of Muslims and Dalits and then the mitigation of these murders by arguing that their murderers were provoked by cattle thieving has, in fact, succeeded in normalizing them. This is neatly illustrated by the political distance Nitish Kumar has travelled. Before the 2014 elections, Kumar quit the National Democratic Alliance in protest against Modi’s elevation. A few weeks after the 2019 elections, he reacted to the beating to death of two tribals and a Muslim by playing the incident down, arguing that it shouldn’t be seen as a lynching at all because the men were cattle thieves.

But the normalization of mob violence against minorities can only be a preliminary to the the real substance of a Hindu rashtra, namely the legitimization of formal discrimination against them. However satisfying the performative savagery of lynch mobs is to bigots, for showing Muslims their place, mob violence is, by its nature, episodic and imprecise. The killing and brutalization of Dalits and tribals in the course of such violence are a form of collateral damage that the saffron brotherhood would like to avoid, given its avowed aim of consolidating every section of Hindu society into a single Hindu nation.

The agenda of Modi’s second term is the institutionalization of discrimination. Central to the sangh parivar’s project is the goal, beloved of all committed majoritarian leaders from Erdogan to Orbán, of reducing minorities to second-class citizens. In formally secular, constitutional democracies like India, this is a complicated business because you need special majorities in Parliament and the acquiescence of the Supreme Court in what would be a flagrant violation of the basic structure of the Constitution.

This is where the BJP’s brahmastra, the citizenship (amendment) bill, comes into play. This bill, which was passed by the Lok Sabha but not the Rajya Sabha before the elections, sets up a religious test for citizenship. It seeks to give all illegal migrants from Pakistan, Bangladesh and Afghanistan amnesty and an accelerated path to citizenship, except for Muslims. This would be straightforwardly unconstitutional, but the bill dignifies this discrimination with the claim that India owes religious minorities refuge and since these three countries are Muslim countries, it stands to reason that their Muslims cannot claim to be persecuted religious minorities. Ergo, India doesn’t owe them the same duty of care.

Couched in the language of refuge and seemingly directed at foreigners, the CAB’s main purpose is the de-legitimization of Muslim citizenship. This is why Myanmar, a country bordering India, was left out of the group of nations specified in the bill and this is why Afghanistan, a country that doesn’t share a frontier with India, was included. To include Myanmar, which the logic of the bill demands, given its emphasis on giving refuge to religious minorities in India’s neighbourhood, would mean granting amnesty to Rohingyas, the most famously persecuted minority in South Asia. This would defeat the whole purpose of the bill which is to lay the foundation for a modern Inquisition aimed solely at India’s Muslims.

The magnitude of the CAB’s purpose can only be appreciated when it is seen in conjunction with the National Register of Citizens. The NRC, despite its name, has provincial origins. It was brought into being because of concerns about illegal immigration into Assam, principally from East Pakistan and Bangladesh. In Assam, the NRC’s processes have so far yielded four million residents who are deemed not to be citizens. A substantial part of this number is non-Muslim but were the CAB to be passed, these non-Muslim illegals would cease to be of concern to Indian authorities because the CAB would effectively amnesty them. It isn’t hard to see why the BJP is enthusiastic about a process that would potentially focus on weeding out only Muslim illegals for internment or deportation.

Amit Shah campaigned on a pledge to make the NRC an all-India institution, with a branch in every state of the Indian union. Consider the implications of this. Theoretically, the NRC would ask all citizens to prove their citizenship. This, in itself, is grotesque, the equivalent of holding all citizens to be guilty till they prove themselves innocent. It’s actually much worse than that because in effect, the only citizens who would have to provide documentary proof of their belonging would be Muslims because by the terms of the CAB, all non-Muslim illegal immigrants would have an amnestied path to citizenship, immune to the danger of internment or deportation.

So if the CAB becomes the law of the land, the immigration authorities, the police and every government institution would be legally justified in focusing on asking Muslims (and only Muslims) to prove that they were true citizens. Muslims as a class could then be legitimately profiled because the law of the land requires them to be. Would such a law survive the scrutiny of the Supreme Court? The obvious answer is no, because it sets up a religious test for citizenship, but the court has handed down strange decisions in the past — not least the ‘Hindutva’ judgment. The government will argue that the CAB doesn’t discriminate against Muslims qua Muslims, that it is merely designed to separate real Indian Muslims from illegal Muslim foreigners masquerading as Indian Muslims.

Should the CAB pass judicial muster, and once the NRC takes on an all-India aspect, this institutional pincer will result in an Indian Inquisition designed to tell true citizens from false ones. And since the rules of the game will have been rigged by the new citizenship law, only Muslims will potentially be false citizens. This destabilisation of Muslim citizenship, this onus on all Muslims, potentially, to prove that they are ‘true’ citizens, this opportunity for not just the state but every landlord, vigilante, employer and busybody to ask Muslims to ‘prove’ themselves, will make second class citizenship for Muslims, the sangh’s holy grail, a reality. That will be the institutional inauguration of a Hindu rashtra, the firm foundation of an Indian fascism.

The NRC and the CAB are the greatest institutional threats to Indian democracy today. As bad as things are now, they can and will be much worse, should Amit Shah, India’s unlikely Isabella, achieve his object: a pan-Indian Inquisition, sanctioned by a poisoned citizenship law. Every citizen who believes in the republic, every writer worth her salt, should do what they can to make sure that this sinister project based on an insidious religious test for citizenship is stillborn.

The power of hatred generated by 2014 elections