After the latest attack, the Hazaras protested with the bodies of the deceased for a week in the freezing cold of Quetta 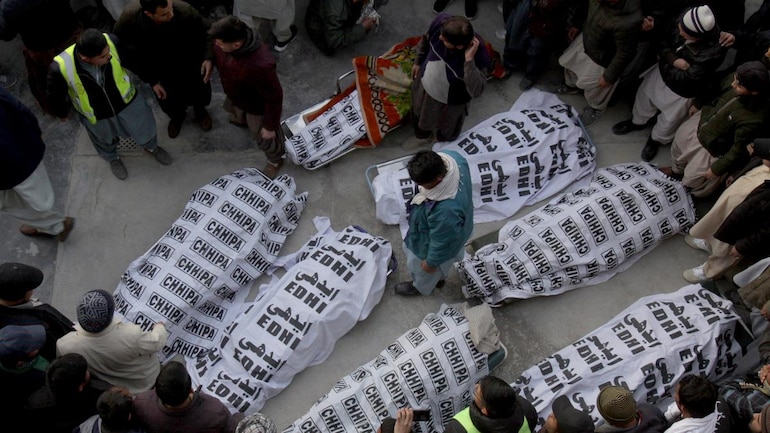 People gather around the bodies of the coal mine workers killed near Machh coal field.
AP via PTI
Mehmal Sarfraz   |   Published 20.01.21, 12:40 AM

The year, 2021, started on a tragic note for the Shia Hazara community in Pakistan. Eleven coal miners belonging to the Hazara community were killed in a gruesome attack on January 3 in Mach, Balochistan. The Islamic State claimed responsibility for the attack. The Hazaras are a peaceful people but also one of the most vulnerable communities in Pakistan. They are routinely targeted and killed by sectarian outfits on account of being Shia. In 2014, the Human Rights Watch published a report about the Hazaras titled, “We are the Walking Dead”. The title sums up their helplessness.

After the latest attack, the Hazaras protested with the bodies of the deceased for a week in the freezing cold of Quetta. All they wanted was for the prime minister to visit them and give them some sort of assurance. Imran Khan, on the other hand, said he wanted them to bury their dead first and he would visit them only then. He said the prime minister of a country cannot be blackmailed like this. Khan faced a backlash for his statement but he didn’t budge. Eventually, the beleaguered Hazaras had to bury their dead. And only then did Khan visit them. He told the families of the slain Hazaras that they need to understand that things are different for a prime minister. “When I was a regular citizen I came to visit you. No one can guarantee that an incident doesn’t happen in the country. So that’s why I sent messages to bury the deceased and said that I will come to offer my condolences. But when you make it a condition, it will set a precedent.” He told them that the government and the entire nation stand with the Hazaras.

We have heard so many the world over give the example of New Zealand’s prime minister, Jacinda Ardern, when she consoled the local Muslim community after the Christchurch mosque attack. She was praised for her compassion, her humanity. This is how a community that has seen a terrible tragedy should be consoled. Unfortunately, the Hazaras couldn’t even get a comforting response from their government. An agreement was reached between the Hazara community and the government but we don’t know how much of it will be implemented. The only thing we know is that the Hazaras don’t feel safe even now. Hopefully, some day, they will be safe.

A persecuted community that has buried hundreds of its loved ones who have been killed in terrorist attacks, a people that has families which have lost all their male members, a community that is ghettoized and is constantly living in fear, can hardly blackmail anyone, let alone the prime minister of Pakistan. Victims cannot blackmail anyone, nor do they want to. All the Hazaras wanted was empathy. All they were asking for was solidarity and a message that the State will look after them. But all they got was a label of being blackmailers. Many justifications were given by members of the government for this statement but no justification can be given because there is none. Let’s hope the Hazaras can some day live in peace and without any fear.

Talking about hope, the year, 2021, will see a roll-out of the coronavirus vaccine in many countries around the world. Pakistan is yet to procure the vaccine although the special assistant to the prime minister on health, Faisal Sultan, told Dawn that Pakistan’s target is to procure it in the first quarter of the current year. Being a developing country with a struggling economy, it is understandable that there are financial strains when it comes to vaccinating the entire populace. Last year was a tough one for people around the globe. Travel restrictions, economic downturn, mental health issues and much more followed as a result of the pandemic. But what is needed now is an investment in the future — a future that we must secure by investing in scientific research and technology. There are many lessons here to be learnt. Given how a pandemic led to a worldwide emergency, we must now focus our energies on healthcare, research and science. So far, we lag behind many countries around the world. It will take decades for results to materialize but start we must.

We hope that this year will be different. That humanity has learnt some important lessons about how the healthcare sector around the world needs a boost and more investment. We hope that 2021 will be a year of peace and not war. The only war we need is a war against poverty. Is it too much to hope for?