The audacious hegemonism of Xi Jinping 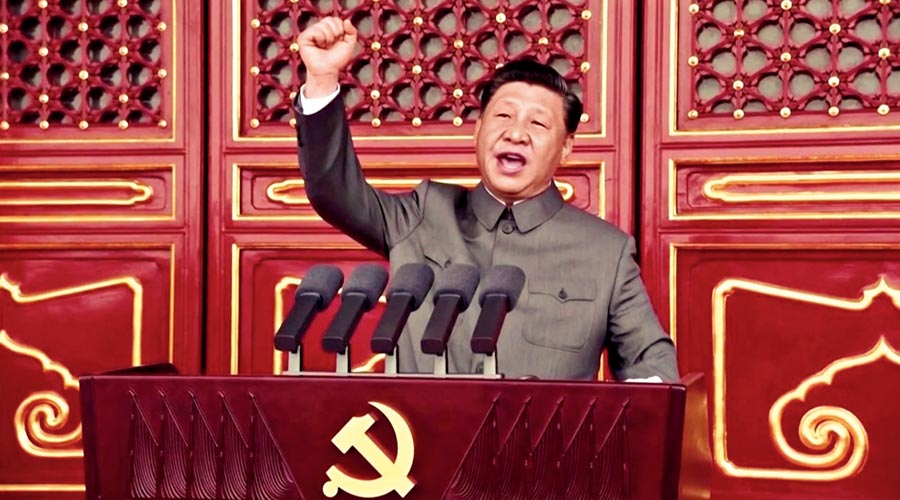 It was not surprising that China’s all-powerful president, Xi Jinping, devoted his online address to the World Economic Forum to attacking the new Cold War mentality that is impeding his country’s geostrategic ambitions. After nearly three decades, when China’s spectacular rise was greeted with a combination of awe and admiration, the mood has changed to concern. Some of the anxieties, predictably, stem from the West losing its unchallenged economic dominance to China — a fear that is most apparent in the United States of America. However, the transformation of anxiety into a Cold War, reminiscent of the post-War US-Soviet tension that cast its shadow on the whole world, is comparatively recent in origin and dates to the rise and  rise of Xi from 2012.

An important facet of the original Cold War was the espionage business that was so vividly captured in the novels of, among others, John le Carré. Apart from gleaning top-secret information, particularly related to atomic research and military deployment, the intelligence agencies on both sides focussed on securing influence and developing either sleeper cells or active networks. Identifying potential assets, nurturing them with patience and, finally, using them to further strategic objectives were key elements of the spy game. The two-volume Mitrokhin archive, gleaned from KGB records, records the scale and the extent of Soviet penetration outside of the communist parties. The section on India is particularly striking and reveals the extent of Soviet penetration in the political class and in the media. Such detailed operational accounts of the work of Western intelligence agencies during the Cold War isn’t yet available, but their success in removing irritants in places as afar as Iran, Chile and Egypt are indicative.

The significant role of China’s intelligence services and wings of the Chinese Communist Party in steering the country’s grand geopolitical objectives has long been suspected. Australia has even enacted laws to stymie the long reach of Beijing. Yet, despite recent moves in different countries to prevent Chinese companies from acquiring interests in research establishments and strategic infrastructure projects, governments have so far shied away from divulging details of the threats to their sovereignty posed by China.

In an unusual move last week, MI5, the spy agency of the United Kingdom, made a public announcement of its deep concern over China’s bid to mould the internal politics of the country. Focussing on the activities of the British Chinese Project, the MI5 stated that its moving light, the lawyer, Christine Ching Kui Lee, “has facilitated financial donations to serving and aspiring parliamentarians on behalf of foreign nationals based in Hong Kong and China”. The statement charged Lee of working for the United Front Work Department of the Central Committee of the Chinese Communist Party. Although the UFWD was established to oversee and coordinate the qiaowu (pronounced chow-wu and literally translated as Overseas Chinese Affairs) and the work of government departments and aimed at targeting all sections of the Chinese diaspora, the MI5 stated it was “seeking to covertly interfere in UK politics through establishing links... across the political spectrum” and to “cultivate relationships with influential figures”. This is in line with the charge made earlier by the Australian writer, Clive Hamilton, in his influential work, Silent Invasion: China’s Influence in Australia, that the UFWD has sought to use the diaspora “to transform Australian society in a way that makes us all sympathetic to China and easy for Beijing to control. Australia will then assist China to become the hegemonic power in Asia and eventually the world.”

The use of ‘soft power’ and the diaspora to promote greater bilateral understanding — in this case, between the UK and China — is a legitimate part of diplomacy. One of the stated objectives of the Narendra Modi government in India, for example, is to mobilize the vast Indian diaspora to act as unofficial ambassadors for India in the host country. To this end, pravasi gatherings are routinely organized each January and prominent overseas Indians are honoured with awards. If the Chinese government is doing likewise, should intelligence agencies get shirty?

Even Sinophobes readily admit that the UFWD is not an intelligence agency and those who act on its orders aren’t ‘spies’ in the commonly understood sense. However, the UFWD’s activities aren’t all innocent. According to an assessment in The Daily Telegraph (London) by Juliet Samuel (who appears to have been well-briefed), “It includes legitimate activity, like making Beijing’s case openly in a public forum, or establishing scholarships for students to study in China. But it also includes pernicious and covert activity... Its agents set up organisations or forge international links with purportedly independent and benign missions and use them to collect valuable intelligence, identify people to wine and dine, file dishonest complaints, organise supposedly spontaneous protests, besmirch the reputations or limit the careers of the uncooperative, or conduct illegal activity, like hiding foreign political donations or stealing technology. Unlike in the Cold War, this is not limited to a narrow subset of fringe media or politicians. It is widespread and devastatingly effective.”

There is another difference from the Cold War. In many cases, fellow-travellers (and India boasted a surfeit of such individuals) on both sides were driven by a measure of ideological motivation — Lenin described them as “useful idiots”. With China having made the transition from Marxism-Leninism-Mao Zedong Thought to assertive Chinese nationalism and hegemonism, there is very little idealism in those in prominent places who unfailingly stand up for Chinese interests. What often tilts the balance in favour of China is plain and simple money power. Whether it is the member of Parliament whose political expenses are discreetly taken care of, the Cambridge don whose research is generously underwritten, the editor whose slant is influenced by lavish supplements paid for by friends of China or the aspiring politician who is given a taste of the good life in Shanghai, money talks. It can even influence the course of research on the origins of the Covid-19 virus.

In the six decades it has taken to move from Mao’s grim grandstanding to Xi’s audacious hegemonism, China has learnt to put its prosperity to good, political advantage.