Narendra Modi has changed the rules of the game 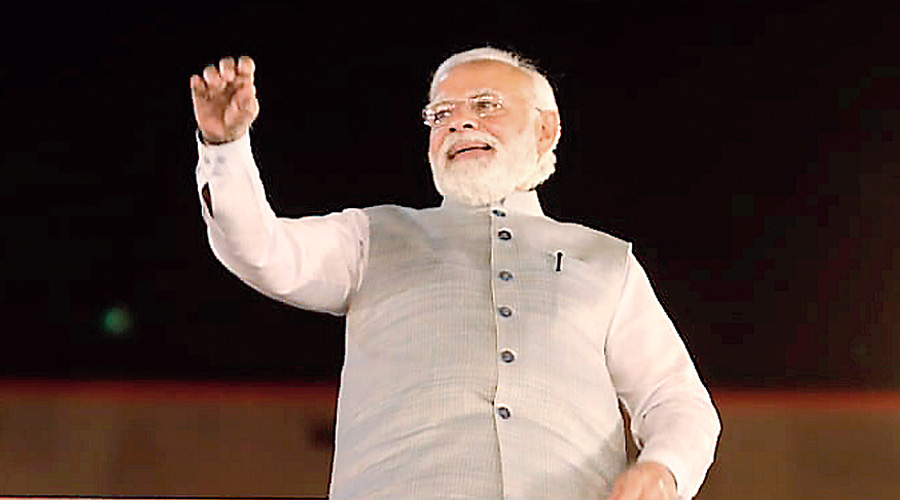 On the first day of the resumed budget session of Parliament, the Lok Sabha witnessed an astonishing scene. As Prime Minister Narendra Modi walked in to take his seat, the entire Treasury benches stood up and thumped their desks vigorously. Subsequently, they broke into the ‘Modi, Modi’ chant — familiar at political rallies of the Bharatiya Janata Party but unusual in the Houses of Parliament. The Opposition benches were uncharacteristically quiet and there was not a murmur of protest.

And why should they protest? Cutting across the divide, the political class was fully cognizant that the prime minister deserved this standing ovation. Elections in India are always competitive, even if they appear one-sided in the months preceding voting day. It was so with the just-concluded five state assembly elections, particularly in the all-important state of Uttar Pradesh. Every political pundit was aware that these elections were a dress rehearsal for the general election due in the summer of 2024. If the BJP was somehow dislodged from UP, it would energize the gamut of anti-Modi forces across the country into believing that a regime change in Delhi was indeed possible in 2024. Moreover, if the Congress won in the two small states of Goa and Uttarakhand — its defeat in Punjab was a foregone conclusion — it would signal a possible revival of the largest Opposition force, a necessary precondition for the emergence of a credible challenge to Modi.

Last week, as the results trickled in, it was apparent that Modi and his party had pulled off an amazing feat. Despite the consolidation of Opposition votes around the Samajwadi Party-led alliance and the near-total consolidation of Muslim votes in its favour, the BJP won handsomely and even improved its vote share from 2017. The party also performed spectacularly in Uttarakhand — a state famous for tiring of the incumbent every five years — and, most important, demonstrated its geographical expansion by winning Manipur, where the BJP was a fringe force even a decade earlier. In four of the five states, Modi delivered victory to the BJP. It was, by any reckoning, a stupendous triumph. The BJP overcame the usual bout of anti-incumbency, the hype around the anti-farm laws agitation, the furore over alleged government ineptitude during the second wave of the Covid-19 pandemic and the determined consolidation of minority votes to win big.

The Opposition parties were understandably dispirited with the outcome, but even more despondent was the army of public intellectuals who believed that the tide had turned against the BJP. By themselves, these voices have a marginal electoral significance, but assume importance in shaping international perceptions of India, forging the media narrative and, most important, moulding the strategies of parties committed to fighting Modi. The common refrain was that the BJP had crafted an alternative common sense centred on Hindu pride and the visceral hatred of the Muslim community which had acted as a deterrence against the popular anger over governance failures. While a few believed that India had changed unrecognizably after 2014 and was now beyond redemption, a significant section felt that fighting Modi and Yogi Adityanath’s saffron charisma warranted an alternative populism. Looking to the future, they are inclined to repose faith in the emergence of the Aam Aadmi Party, which registered a famous victory in Punjab. In the coming year, India is likely to witness the AAP being assiduously promoted as the mainstay of an alternative to Modi, an approach that is unlikely to be looked upon favourably by the more entrenched parties. Indeed, the rising prominence of the AAP is certain to trigger internecine war in the ranks of the Opposition, something that won’t exactly displease the BJP.

How politics in the coming two years will play out is a matter of conjecture. However, much will depend on what broad lessons the political parties draw from the election results. If the overriding belief is that the BJP unleashed a Hindu wave that had the majority community rushing to the polling stations with saffron tilak on the forehead, it is likely that the push will be towards either incorporating Hindu symbolism into secular parties — as the AAP has done successfully and the Congress more clumsily — or advocating ‘hard’ secularism that, apart from contesting ‘majoritarianism’, may occasionally involve attacking regressive practices in minority communities. In the main, however, secular politics has come to imply being sympathetic to Muslim identity concerns, a reason why it has been hard hit by the Hindu backlash.

There is no doubt that the assertive promotion of Hindu interests by the BJP — particularly in UP and Uttarakhand — and the disavowal of the Muslim ‘veto’ — what Yogi Adityanath described as the ‘80 versus 20’ phenomenon — played a role in the BJP’s victory. According to The Hindu-CSDS-Lokniti survey of voters, nearly 54 per cent of Hindus in UP voted for the BJP in 2022, as opposed to 47 per cent in 2017. The corresponding SP tally was 26 per cent in 2022 and 19 per cent in 2017. It is interesting that the SP secured the support of a whopping 79 per cent of Muslims in 2022. Moreover, the social coalition of Hindu castes that the BJP crafted was formidable. It secured the support of 89 per cent Brahmins, 87 per cent Thakurs, 54 per cent Jats, 66 per cent Kurmis and 63 per cent of the smaller backward castes. The BJP was in a minority only among Yadavs and Jatavs, supporters of the SP and the BSP, respectively.

However, neither Hindu nationalism nor caste mobilization can fully explain why the BJP found favour with women, small farmers and others belonging to poorer sections of society. The CSDS-Lokniti survey, in fact, lists “the relatively high popularity of the Central government” and “the positive effects of welfare schemes” as important factors that explain its victory in UP and Uttarakhand. The popularity of Modi at the Centre, in fact, helped ward off local anti-incumbency.

In the 1990s, when Hindutva became a talking point in electoral politics, it used to be said that there was no apparent connection between the BJP’s ideology and its programme of governance. By creating a bridge between compassionate governance, particularly during the pandemic, and Hindu nationalism, Modi has rewritten the rules of electoral politics.