The Muslim vote in the Uttar Pradesh elections 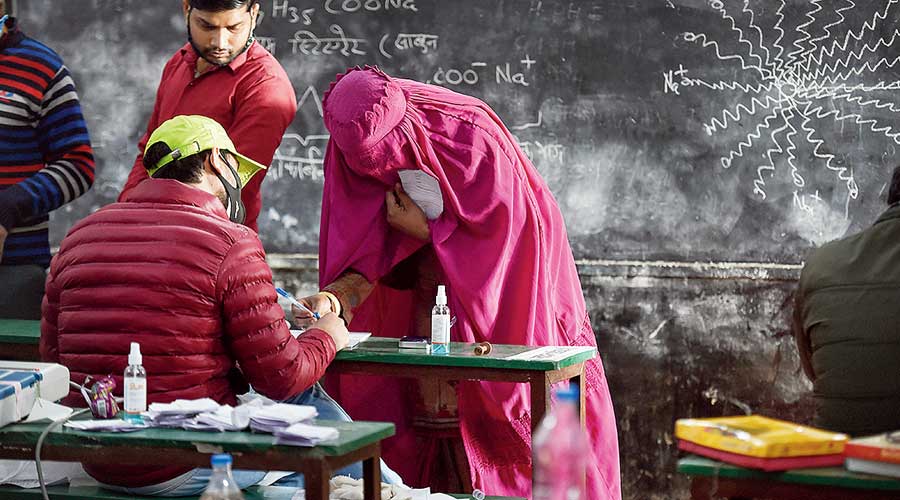 After five years under the scorching ‘double engine’ of Hindu rashtra, the Muslims of Uttar Pradesh are being called upon to vote as full citizens. It is the one democratic right they still substantively possess in equal measure to Hindus. How might they exercise it?

Perhaps this is a fundamentally flawed question. Many scholars, such as Professor Hilal Ahmad, have spent years demonstrating the myth of the ‘Muslim vote bank’. The electoral record of the past several decades in Uttar Pradesh has clearly underlined two things: one, Muslims don’t overwhelmingly vote for a single party and, two, the Muslim votes to different parties fluctuate by constituency and region. The analysis of election surveys further shows that (like other communities) Muslims are also influenced by the other social factors of caste, class and gender as well as aspirations for better governance. In other words, Muslims don’t merely, or even primarily, vote as Muslims. But is some of that changing?

It wouldn’t be an overstatement to say that for many Muslims, this election seems imbued with an existential dimension. It is taking place in a context when there is no reliable protection of the rule of law available to them anymore. Their lives have been taken with impunity, from the 22 men shot dead in the anti-CAA protests to the scores killed in police encounters. Their property has been illegally seized, as the Supreme Court recently noted, on the pretext of punishing disorderly conduct. And their livelihoods have been threatened by mobs of vigilantes acting under State sanction targeting street vendors and tradesmen to butchers and leather tanners. On top of that, their saffron-robed chief minister hints that there is worse to come, openly fighting this election against the ‘20%’ of ‘them’ under his ‘80% versus 20%’ election theme.

Given this context, it is not surprising that we are seeing signs of a marked consolidation of the Muslim vote behind the Samajwadi Party, the principal challenger to the Bharatiya Janata Party. The ground reports from the first two phases in western Uttar Pradesh attest to this. The SP is believed to be sweeping the Muslim-dominated belt — Moradabad, Rampur, Amroha — of the second phase. Even in the strongholds of the Bahujan Samaj Party — Agra and Saharanpur — Muslims are reported to have largely backed the SP. This would be in line with opinion polls, which indicated that up to three-fourths of Muslim respondents intended to vote for the SP.

This level of Muslim consolidation has not been realized in the state for the last three decades as Muslims have divided their votes among the SP, BSP and the Congress. Even in elections when they favoured the SP, almost half of the Muslims voted for the other two parties. Why is this consolidation happening in this election?

For starters, we have seen this picture play out in Bengal where the BJP’s strident Hindutva campaign helped the TMC garner as much as 75 per cent of the Muslim vote according to Lokniti data. The Congress was wiped out even of its Muslim-dominated strongholds of Malda and Murshidabad.

Fearing a similar fate in Uttar Pradesh, the Congress’s Imran Masood of Saharanpur shifted to the SP before the election. “We have decided to uproot the fascist government of the BJP, and only SP and its agenda of development can do it,” Masood said as he joined the SP. While the Congress had won two seats in Saharanpur in the last election, largely on the back of Masood's influence, this time his base had pushed him to join to the SP. On joining the SP, however, he was denied the ticket to his Nakur seat, which went to fellow defector and sitting MLA, Dharam Singh Saini.

In Bengal, however, the overwhelming Muslim vote for the TMC was also built on targeted policies towards the community by the chief minister over two terms. Meanwhile, in Uttar Pradesh, Muslims are flocking towards the SP despite little outreach, with Akhilesh Yadav hesitant to even utter the word, ‘Muslim’, throughout the campaign. If it is indeed the threat of another term of Yogi Adityanath that is pushing Muslims to a tighter embrace of the SP, it is a disquieting outcome.

This is because the Muslims of Uttar Pradesh have been a committed vote base before and, on the whole, it hadn’t served them well. Up until the mid-1980s, the Muslims were a key part of the Congress’s successful Brahmin-Dalit-Muslim combination even if they were considered the more volatile component of the three communities. Despite this, successive Congress governments failed to put a lid on recurrent Hindu-Muslim riots in western UP that were often a euphemism to describe anti-Muslim massacres by the UP Provincial Armed Constabulary. As Christophe Jaffrelot has written of the time, the Congress leaders of the state were not above fuelling riots to either ‘teach a lesson’ to Muslims for their misguided vote in the previous election or as a stratagem to pocket the Muslim vote by appearing as the only saviour of the community.

The increase in political competition for Muslim votes since the early 1990s, when they drifted away from the Congress towards the SP and the BSP, led to an abatement of Hindu-Muslim riots in the state. After coming to power, Mulayam Singh Yadav publicly announced a policy whereby the senior administrative officers of a district would be automatically transferred if a riot wasn’t controlled within 24 hours. Consequent to this policy, the DM and SSP of Aligarh were transferred in 1995 when they failed to quickly diffuse a riot. Further, after a slump in the 90s, there was also a steady uptick in Muslim representation in the state assembly, which had for long periods languished in the single digits, reaching an all-time high of 17 per cent in 2012.

This is why the long-term viability of the BSP and the Congress in Uttar Pradesh seems to be in the interests of the Muslim community instead of a state of bipolar competition between the SP and the BJP. A multi-corner contest also increases the bargaining power of local Muslim leaders, which has gone down in this election, judging from the SP’s denial of tickets to leaders such as Imran Masood in Saharanpur and Kadir Rana in Muzaffarnagar.

Nevertheless, there are a few welcome signs on the horizon as well. The hold of the clerics on the voting preferences of Muslims, in reality always tenuous despite the obsession of the media, has become completely defunct. Instead, younger Muslims, many of whom played a leading role in the anti-CAA protests, are quietly emerging as significant vote-mobilizers in their constituencies.

Another space for Muslim leadership is emerging in the form of the All India Majlis-e-Ittehadul Muslimeen, which is setting a political agenda of the material upliftment of Muslims through greater substantive representation. In one respect, it is building on the space carved out by the Peace Party, a party of backward weavers of eastern Uttar Pradesh, which won four seats in 2012, campaigning on the neglect shown towards the material issues of Muslims by secular parties. It is probable that the AIMIM will struggle to win seats in this election, but in invoking issues of security and backwardness related to Muslims, it ensured that the specific concerns of Muslims were not rendered completely invisible in these elections.

The BJP has long campaigned on the bogey of the ‘Muslim vote bank’, and it is vital that its majoritarian politics does not in fact succeed in conjuring up such a captive vote bank. The highest aspiration of a Muslim voter from Indian democracy ought not just be reduced to defeating the BJP in his/her constituency.

Asim Ali is a political researcher and columnist based in Delhi