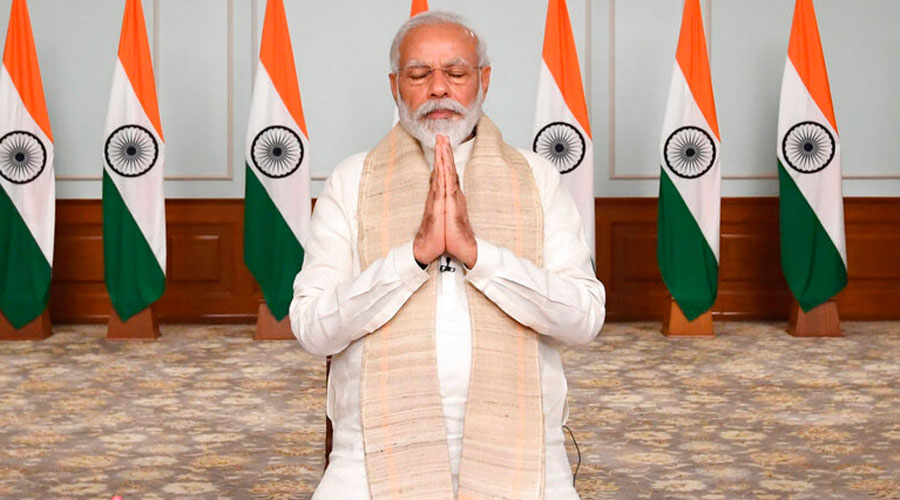 Those who live by the sword don’t always die by the sword; they are able to hold on, for a time, with the pretence of a sword. It is when that pretence is no longer sustainable that they perish. Often, there is not even the requirement of a sword at that stage; the accumulated consequences of the pretence are enough to sound an end.

Scarcely a year on from his “ghar mein ghus ke maarenge” pyrotechnics against Pakistan — a hyper-chested fire-breather act post Pulwama that delivered him a handsome electoral endorsement — the strongman image of the prime minister, Narendra Modi, has suffered blows that he appears too shocked and shaken to even admit to.

The military purchase of the Balakot air-strike remains clouded in a welter of claim and counter-claim but there was a swift and dramatic response to the horrific terror-strike at Pulwama for which blame was summarily nailed on Pakistan. Fighter jets were scrambled and sent across the LoC for the first time since 1971. They did exhaust their lethal payloads over Pakistani territory before returning home. A punch was delivered, an intention stated: “Hamara siddhant hai, hum ghar mein ghus ke maarenge.” Modi received vociferous applause at every stage he mounted thereafter. He made many belligerent speeches on the back of Balakot and became the Rambo pin-up of the 2019 election. He earned a wholesome victory as Papa-Protector.

Last summer seems funnelled so far and deep in the past this summer. The Chinese — not some proxy mercenary infiltrators, as in Kargil, or a shoot-and-scoot terror outfit, as often in Kashmir, but the uniformed People’s Liberation Army — have ingressed deep into what India considered its flank of the conundrum that is the unmarked Line of Actual Control. Not at one point, and not a furtive breach. At multiple points, with a brazen dare — come get us. They have come in large numbers. They have come with construction and military hardware. They are settling down, as if it were their rightful squat. They are pitching tents where Ladakhi horses would go summer grazing, they are digging kitchens where Indian patrols would often take breathers. In the course of achieving all of this, one day they killed 20 Indian soldiers, injured dozens of others and took 10 captive, whom they later released. A few days later, Beijing’s envoy to Delhi issued a chit of paper blithely proclaiming the Galwan Valley as Chinese real estate from his office a stone’s throw away from the prime minister’s residence.

We have, over the last two months, suffered in-your-face violations of territorial integrity, through military grab and diplomatic assertion. Modi has not been able to bring himself to utter the word, China; the contrast with how he responds to transgressions by Pakistan is not merely striking, it’s bewildering. Modi has employed an array of relative nouns and third-person pronouns to hint at the direction of China but it would appear as if China is too formidable — or too sacred — for him to blame by name. Going purely by the prime minister’s words, there is, in fact, nothing to blame China for because there has been no intrusion of Indian territory at all; those soldiers sacrificed their lives in the process of delivering a blow to those who had eyed “Bharat Mata”. Those blows have been effectively delivered. End of matter, let’s move on.

But lies do not travel well; they are sooner tripped by the truth. Modi’s ‘no intrusion’ assurance has been blown apart, in great part, directly or indirectly, by various wings of the government he heads. The foreign office mumbled a plea to China to back over to its side of the LAC. The Indian ambassador in Beijing remains on record for a series of admissions — that the Chinese are on the Indian side of the LAC, that they have erected (military) structures in areas India considers its own, that such activity needs to stop and the PLA needs to move back to its side in order for disengagement and de-escalation to happen. On the military side, senior commanders have been in negotiation. What could these be about if the PLA has not made inroads and altered the LAC on the weight of military superiority and the will of political bosses it answers to? What do satellite images from independent watchers tell us other than that the Chinese are audaciously taunting India from new ground they have captured, even embossing on a promontory overlooking Pangong Tso a shape that resembles the Chinese map? The Papa-Protector construct is taking more than just ribbing and jabbing in sensitive parts.

But Modi’s political adversaries may be sorely wrong to sense this is their gotcha moment. There are reasons for this. The first involves their own ineptitude. The Congress, probably the only political party even interested in questioning the government on its alarming failures in eastern Ladakh, has not been able to build either mood or momentum on an issue of legitimate concern to all Indians. Instead, it has been cleverly trapped by the Bharatiya Janata Party and its proxy force-multipliers in the media into a whataboutery bout: what about Nehru? What about 1962? The questioning of Modi — and it is legitimate questioning over diplomatic miscalculation and military slip-up — has somehow failed to achieve a significant breach beyond the constituency of those who stand opposed to him anyhow, for a million other reasons, Ladakh or no Ladakh. At least not yet. The perception of the sword continues to hold sway.

There’s another, probably more significant, reason. Modi remains, by far and away, the best diviner of the electoral pulse. And keeping the advantage on it is what most matters to him — keeping power. It would be foolhardy to believe Modi is plodding on in denial mode on the reverses in Ladakh without a sense of its potential to damage him, or without a plan. So there is an audible churn under the wheels of the armed forces, and a visible build-up of men and hardware on the frontier. There is, if only symbolic, the sidewinder punch on popular Chinese software applications. There is the mandatory invocation of Bharat Mata to keep the ranks rallied.

There is, to ringing contrast from all of this, nothing from the usually bellicose Modi. But it is unlikely that his refusal to address the issue personally and publicly is merely a consequence of wishful thinking that if he continues ostrich-like for a bit longer the crisis will somehow pass. Not addressing China and Chinese aggression cannot even be a mid-term plan. It requires demonstrable trysting. Is there something in the works Modi can pull off from his position of disadvantage? Through engagement? Through diversion? Through another disruptive bolt of a decision Modi is so capable of springing? It cannot be easy for Modi — far larger than life, far larger than what he must see of himself in the mirror — being on the wrong side of a bout, taking punches. He would also be aware that pinching, as he has done with the ban on Chinese apps, is no match for a punch. He is the man who wields the sword. Or is he beginning to turn into the pretence of it? The answer will inevitably come.