A coup with notable discontinuities 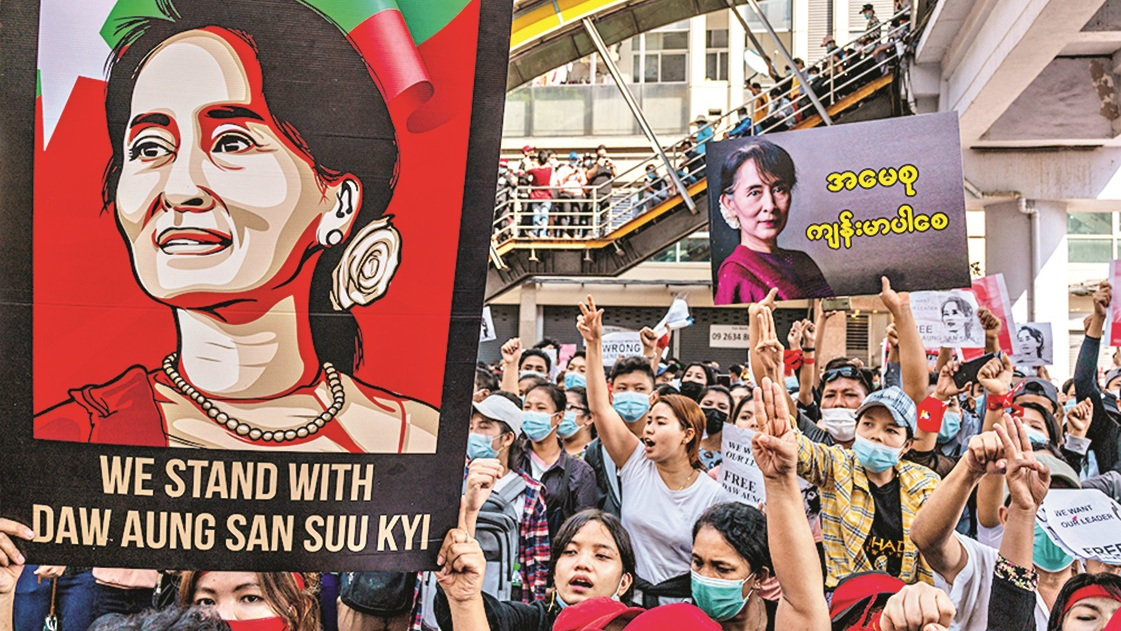 Protesters make three-finger salutes and hold up banners and posters as they march on February 08, 2021 in downtown Yangon, Myanmar. Tens of thousands of workers took to the streets in addition to protesters who had continued a campaign of civil disobedience over the last week. The movement represents the biggest challenge to the military junta, also known as the Tadmadaw, who on Feb. 1 staged a coup against the elected National League For Democracy (NLD) government and detained de-facto leader Aung San Suu Kyi, in more than a decade.
Stringer/Getty Images
Luv Puri   |   Published 02.03.21, 03:11 AM

By staging a coup on February 1, Myanmar’s commander-in-chief, Min Aung Hlaing, ended Myanmar’s brief and tenuous one-decade experiment with democracy. He claimed that the military takeover would avert widespread protests on opposite sides of the political divide — those in support of the claims of election fraud and those in support of the elected government. The National League for Democracy had won 396 out of 476 seats in the November elections in 2020, gaining the mandate to govern for another five years. The Union Solidarity and Development Party, founded by retired generals in June 2010, won only 33 seats.

With a population of nearly 54 million, Myanmar, a land in which the majority adhering to the Theravada tradition of Buddhism coexists with ethnic and religious minorities, is no stranger to military rule. Except for the time periods of 1948 to 1958 and 2010 to 2021, the military, known as the Tatmadaw, has governed the country with absolute control for 73 years of its republican journey. Apart from fighting internal insurgent groups, the military has also monopolized the political economy by running enterprises like breweries and receiving licensing fees for the lucrative jade mining in the north. Externally, the reactions in the last one month were along the expected lines governed by geopolitical considerations. However, internally, the trend line reflects strong discontinuities from the previous episodes of military rule in Myanmar.

Externally, the condemnation of the military coup from the United States of America and other Western players like the United Kingdom, which usually lead the United Nations Security Council initiatives on Myanmar, was instant. Several Southeast Asian countries like Cambodia, Vietnam, Laos, Brunei, the Philippines and Thailand stayed neutral whereas regional heavyweights, such as Indonesia, Malaysia and Singapore, expressed concern and hoped for a return to democratic rule. Outside the Southeast Asian region, India, a neighbour with its own operational dependence on the military in the border areas, reacted in a calibrated manner with the aim not to disturb its overall interests. Japan, with vast, varied investments across Myanmar, was relatively vocal in criticizing the military leadership. China, whose initial reaction was more along the lines of its traditional realpolitik adjustment, agreed to a UNSC statement that called for the “immediate release of all those detained” and stressed “the need to uphold democratic institutions and processes, refrain from violence, and fully respect human rights, fundamental freedoms and the rule of law.” Apart from being one of the largest investors in Myanmar, China enjoys a complex relationship with the Tatmadaw, which is suspicious of its role in internal insurgencies. Chinese weaponry is circulating among various insurgent ethnic armed groups in Myanmar. In 2010-11, China was quick to sense the direction of the wind in Myanmar. After ignoring the NLD leader, Aung San Suu Kyi, for years, China’s ambassador in Myanmar met her in December 2011. The NLD rule was marked by a greater, intricate engagement of Myanmar with China.

Internally, the situation is far from static, and the reactions are notable. First, with at least 40 per cent of its population being internet-users, the mobilization of the younger generation has become easier and spontaneous. The creative protests on the streets include murals and satire and they have exposed the military leadership before the international community. There were political activists who used satire even before 2010. The celebrated comedian, Maung Thura, popularly known as Zarganar, was infamously sentenced under different charges for 59 years. He was released in 2011 as part of the process to release political prisoners that won international acclaim. The power of social media is now making the internal protests more visible to the outside world. Bluetooth apps, such as Bridgefy, are being widely used as the military has shut down the internet intermittently. There is also a civil disobedience movement by civil servants. But the developments are unlikely to change the course of the military leadership immediately, sap the energies of the military administration and challenge the military’s narrative of stability, normalcy and control.

Second, in 2021, any military repression to quell mass-protests through crackdowns will be instantly exposed, both internally and externally, because of the presence of smartphones. This is unlike the repression of 1988 and 2007. At least 3,000 deaths were reported in 1988. In 2007, the Myanmar State media reported that nine people had been killed though this number was widely disputed for gross underreporting.

Third, protests are taking place in a situation in which corporate global brands are increasingly sensitive to risks to their reputation, particularly among the client base of millennials and Generation Z. Nike stood in solidarity with Black Lives Matter. In Myanmar too, the Japanese beer giant, Kirin, decided to pull out of a partnership in Myanmar that it runs with a conglomerate linked with Myanmar Economic Holdings, which is overseen by Min Aung Hlaing.

Four, the military was expected to exploit the ethnic and religious fault lines within Myanmar, including those on the Rohingya issue, to justify its rule. Myanmar’s minorities form at least 35 per cent of the population. While areas like the Wa state adjoining China, which enjoys de facto independence, were aloof from coup-related developments, reports suggest that in other, non-Bamar areas, such as Kachin, Kayah, Karen, Chin, Rakhine, Mon and Shan, anti-coup rallies have taken place. This despite the fact that in its first term (2015-2020), the NLD had failed to inspire the minorities with the national reconciliation process.

Five, the coup takes place when the Tatmadaw is seen by the international community as chiefly responsible for one of the biggest man-made crisis of this century. At least 6,700 Rohingya Muslims, according to a Médecins Sans Frontières finding, were killed in Rakhine in August 2017 and over 700,000 escaped to neighbouring Bangladesh. It was not surprising that after the coup, one of the first statements of the military leadership was to assure the international community that it would abide by the NLD government’s commitments on the repatriation of the Rohingya from Bangladesh to Myanmar. The process is presently in a stalemate because of various reasons, including the lack of suitable conditions for the Rohingya to return. Without the buffer of a civilian government, which had defended the military in the International Court of Justice, Hague, in December 2019, there is the possibility of greater resolute international efforts to indict the Tatmadaw’s leadership that is perceived to be the chief perpetrator of the Rohingya crisis in 2017 within the scope of ongoing mechanisms.

Finally, on the basis of previous experience, there is a realization that the evisceration of the military from the country’s power structure will not happen anytime soon. Suu Kyi, who is 75 years old, is still the undisputed leader of the majority Bamar population. The protesters seem to be prepared for a long haul. A more diffused, ethnically diverse and relatively younger leadership with a blueprint for the country’s political future that could share the burden of the old guard and take over the leadership baton in a few years is the need of the hour. Indeed, it would have to factor in both successes as well as shortcomings of the three-decade-long efforts of the NLD leadership.