It is not just funds that have been the problem with the Narendra Modi government, but also attitude and approach 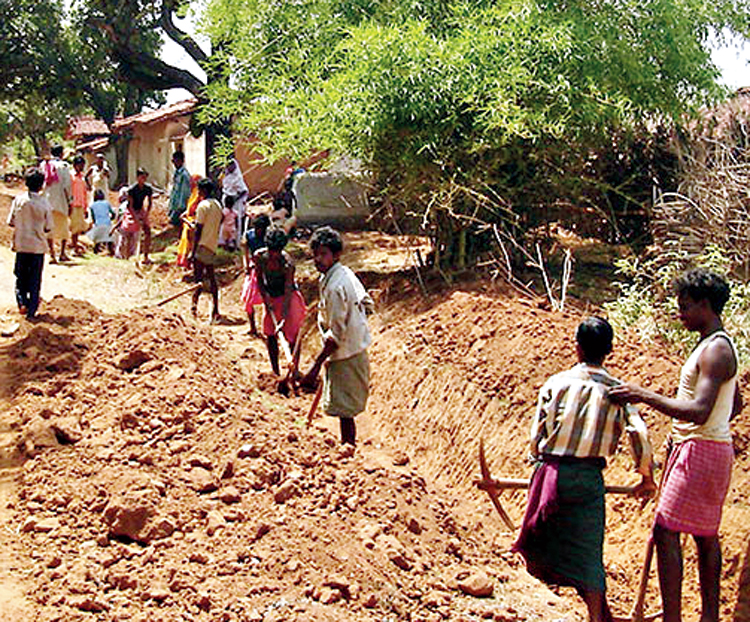 MGNREGA workers. The last two years of UPA-II began the slide in the scheme, with some of its own neo-liberal economists designing a strategy of ‘benign neglect’ for MGNREGA. But prime minister Narendra Modi went several steps further.
The Telegraph file picture
Nikhil Dey   |   Published 30.01.19, 03:27 AM

Rural distress, the crisis in the agricultural sector, drought in several states and an election year — everything that should spell high allocations and commitment to the Mahatma Gandhi National Rural Employment Guarantee Act. But as with budget statements over the last five years, we are likely to hear a repeat of the same tall claims of the ‘highest allocation ever’ — actually concealing more than it reveals.

In fact, the MGNREGA has been suffering from a shortage of funds for over seven years now. In all likelihood, even in this budget, it will continue to suffer from its biggest challenge — a sustained and continual fund crunch.

It is not just funds that have been the problem with the Narendra Modi government and the MGNREGA. It has also been its attitude and approach. In April 2015, within a year of coming to power, the prime minister derisively attacked the MGNREGA on the floor of Parliament. In attempting to place the attack within the Congress-BJP binary, the prime minister caused immense damage to a programme that could have been a key policy measure to deal with the serious ongoing issues of agrarian distress. The MGNREGA has proved that it has the potential to provide a viable ecosystem to deal with rural distress; be a stepping stone to families trying to liberate themselves from poverty and a framework for infrastructure development in rural India. In a unique manner, it is a paradigm that actually counters the onward march of a development model that is continually fuelling climate change and natural disasters. Given that the prime minister wields more than his share of influence in this government, it is not surprising that for the last five years, the MGNREGA has been deliberately starved, contributing to mass neglect and distress of the people that it serves.

The last two years of UPA II began the slide, with some of its own neo-liberal economists coining and designing a strategy of ‘benign neglect’ for the MGNREGA. But Prime Minister Modi went several steps further. He promised to preserve the programme as a monument to the failed policies of the Congress government as if the MGNREGA was a kind of development holocaust that had to be preserved as a lesson of humanity gone wrong. It was a deadly blow in at least two significant ways: it passed a message down the line that even if it were to survive the MGNREGA was not a priority. And it made the government ever reluctant to use its potentially biggest initiative against the pain of unemployment, and of rural distress.

Because of the reaction of the people, and the potentially disastrous political consequences of doing away with it, the MGNREGA has survived. But, as a result of the prime minister’s undisguised disdain, it was continually starved of resources; even the resources made available were seldom used with administrative enthusiasm and commitment.

One significant contribution that helped the MGNREGA limp along was a case in the Supreme Court filed by Swaraj Abhiyan on drought-related distress. The Supreme Court examined and brought attention to the implementation of the MGNREGA, detailing it as a major legislative measure of relief available to the people in drought and crisis-affected areas. Despite many warnings, sharply critical analyses and orders from the Supreme Court, the government kept the MGNREGA in an anaemic condition.

The MGNREGA is a vast programme with very simple and straightforward fundamentals. Any household willing to do manual work for eight hours a day can demand up to 100 days of work at minimum wages, and this demand will be honoured regardless of other budgetary priorities. It is the only demand-driven legislative measure and has been serving the needs of approximately 12 crore active workers. Today, they are the ones facing hardship caused by the state/Centre, when the latter violates the law by not providing work on demand, not paying unemployment allowance, not paying minimum wages, not paying wages on time and not paying compensation for delayed payments.

It is not as if bringing the MGNREGA alive is not possible even today. Rajasthan provides a recent example of a dramatic turnaround because of a decision by the newly-elected state government to run a ‘Kaam Maango Abhiyan’ across the state. In the year 2009-10, the MGNREGA generated almost 45 crore person days of work in the state. From 2013-18, this figure fell below half to an average of less than 22 crore person days. The numbers of people who had completed 100 days of work fell from 25 lakh in 2008-09 to a measly one-tenth of that number, with only 2.2 lakh people completing 100 days in 2017-18.

The turnaround in just a month has been unambiguous. As soon as the state government started passing a strong message to prioritize the MGNREGA and provide work on demand, the administration started taking interest. The bureaucracy started visiting work sites and organizing the weekly Rozgaar Divas, and employment provided started shooting up. In less than a month, the workers being given work has gone up 1.5 times, from 16 lakh workers per day to 24 lakh.

But instead of nurturing this revival, the effort could be callously neutralized by the Central government. The state was only able to begin the initiative because it had approved work days not utilized by the previous government lying in its kitty. The Central government pays the wages, and if wages are delayed, the programme will become a cause of new distress. The Centre also conceals the delay of wage payment on its part; so even the legally mandated payment of delay compensation will be ‘saved’, while workers suffer.

This blatant subterfuge with data and the law has been carefully detailed in an important piece of research conducted by an independent group of researchers. In their study on payment delays, more than 90 lakh transactions across 10 states were conducted to decisively prove that the Central government has inordinately delayed payment of wages (an average of 50 days) and not paid compensation to crores of workers. In an ongoing study, they looked at more than 5,700 panchayats across 20 states to find that the Central government has been illegally starving the programme of funds, thereby curtailing demand, not honouring even its illegitimate ‘approved Labour budget’.

Even today the government is in the red, and better-performing states are the worst affected. As with states like West Bengal, Kerala, Karnataka, Maharashtra, Tripura and Telangana over the last few years, in Rajasthan too, the Government of India is unlikely to pay the labourers for months and, despite Supreme Court orders, the Central government will not acknowledge its role or even pay compensation for the delay.

The tragedy is that given adequate funds, coupled with political and administrative attention, there is much more that the MGNREGA could do to change our distressing rural situation. Coupled with the Building and Other Construction Workers Act, it could provide rural people with real social security. It could, for instance, provide pension and insurance benefits to the workers, acknowledge the role women workers play in the rural economy, provide appropriate and productive work to the differently-abled and give landless labour and small farmers the means to stay alive. But for all this, the MGNREGA needs a real commitment to be demand driven and appropriately financed. More than a hundred parliamentarians wrote to the prime minister on January 13, asking him and the government to rescue the MGNREGA by funding the programme adequately. They will need to be more than active on the floor of Parliament during the budget session if the MGNREGA is to get even part of the resources it deserves.