Mastery of the waves

A maritime perspective for India 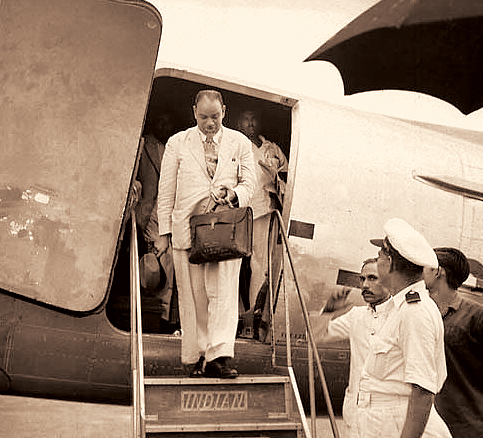 This is a particularly appropriate time to recall K.M. Panikkar. Two contemporary Keralites — V.K. Krishna Menon and V.P. Menon — are the subject of new full-length biographies. Clearly Panikkar merits one too. Also, the second week of February is when Panikkar comes most to mind. This was when in 1942 the garrison in Singapore surrendered to Japanese forces — the “largest military capitulation” in British military history in Churchill’s words. In Panikkar’s context, the fall of Singapore in 1942 stands out because he was possibly the first thinker who contextualized it in the longer time frame of India’s maritime history and equally as a building block for the construction of an oceanic perspective for an independent India.

Panikkar’s life (1895-1963) and career make up a fascinating story of many parts. He began, notwithstanding his strong Kerala roots, as a history teacher in the Aligarh Muslim University, moved on to become editor of the Hindustan Times and then served in the princely states of Bikaner, Kashmir and Patiala. This covered the period broadly up to India’s independence but this diversity of posts and functions do not capture the wide range of his interests. A series of books regularly punctuates his life story, covering a wide spectrum from the evolution of Indian federalism in the 1920s and biographies (including one of Gulab Singh — the founder of the Kingdom of Kashmir). There were alongside a number of full-length historical works which again underline Panikkar’s Catholic interests. The list includes a study of the seventh century Indian ruler, Harsha, a study of the Portuguese presence on the Malabar coast in the 16th and 17th centuries among others.

Panikkar’s public life as a high official in major princely courts was complemented by his scholarly and literary activities. His intellectual output was a major factor in explaining his career trajectory after Independence. He was appointed ambassador to China in April 1948 when its government was headed by Chiang Kai-shek. A year later the communists took over. Panikkar’s account of his China years is appropriately titled In Two Chinas. His role with China’s new government was the subject of much controversy with Sardar Vallabhbhai Patel’s criticism in 1950 that “at a crucial period” the Chinese government “managed to instill into our Ambassador a false sense of confidence in their so-called desire to settle the Tibetan problem by peaceful means”. From China, Panikkar moved on to Egypt and thereafter on return to India was appointed as member of the states reorganization commission.

Throughout his career Panikkar’s historical and literary output was prodigious. He remains best known, however, for his 1953 classic, Asia and Western Dominance. The book was intriguingly subtitled A Survey of the Vasco Da Gama Epoch of Asian History, 1498-1945. This develops ideas explored first by Panikkar in a number of smaller works written around the time Singapore fell and as the region that forms the interface of the Indian and Pacific Oceans became a major theatre of World War II. The first, The Future of South East Asia (1943) emerged in the wake of Japanese maritime expansion into the Indian Ocean and its thesis in brief was that “[t]he future of South East Asia could not be divorced from India”. This was followed by India and the Indian Ocean, subtitled An Essay on the Influence of Sea Power on Indian History. The third was a shorter The Strategic Problems of the Indian Ocean, the text of an address to the Indian Institute of International Affairs, a precursor to the Indian Council of World Affairs with which Panikkar would be closely associated in the 1950s.

These three books contain ideas and hypotheses that merit rereading today because, while the wider geopolitics of the Pacific and the Indian Oceans have changed, there are nevertheless other factors that have not, and some of these are best represented by using the very epigrams that Panikkar used. Thus, “The old maxim that he who controlled the Atlantic also controlled the Indian Ocean, true in the circumstances of the three centuries following Vasco da Gama’s arrival at Calicut, was found to be no longer true when the Pacific Ocean also became a scene of naval rivalry.” For Panikkar, a one-sided view of Indian history was the tendency to overlook the sea. While the North-West and North-East frontiers were important strategic areas, the lesson of history is that “the future of India has been determined not on the land frontiers, but on the oceanic expanse that washes the three sides of India”. The decline of the Cholas in the 13th century removed from the scene the only Indian power that conceived of itself in maritime terms. Those who followed, such as the “Mughals with their Central Asian tradition had no recognition of the importance of the sea”.

The British mastery over the Indian Ocean by the end of the 19th century meant, perversely enough, the reinforcement of the continental as opposed to a maritime perspective in Indian strategic culture. Thus Panikkar was to term Lord Curzon a “true successor” of the Mughals and their Central Asian concerns. Other British officials, such as Durand, Younghusband and others were similarly “essentially landsmen” and, like Curzon himself, “thought of the sea only as a frontier and not as a vital territorial area”.

We also frequently encounter in Panikkar the importance he gives to a different set of dates to underline a maritime perspective of Indian history. Significant dates for Panikkar are 1504 and 1509 when the naval battles of Cochin and Diu meant that power over the Arabian Sea passed into European hands; 1784, which marked France’s exclusion and maritime control over India coming in the hands of a single Atlantic power — Britain, and 1942, when that Atlantic supremacy ended with the Japanese expansion into Southeast Asia and Burma. One can imagine Panikkar envisaging the early 1940s as a twilight zone of empires: Atlantic domination over the Indian Ocean was ending and a Pacific mastery was beginning. Japan’s defeat was inevitable with the United States of America entering the Pacific war. The point for Panikkar was that “it is hardly to be imagined that China will in future neglect her naval interests”. Such a ‘resurgent China’ would mean an added significance for a new state — Vietnam — as its position enabled it to control the South China Seas which was “a true Mediterranean of the Pacific”. This was a geopolitical vision constructed in the classical way — with a map or a globe in one hand and a history book in the other.

Panikkar’s description of the maritime space of vital concern to India is also remarkably prescient in the context of what we in India today call the Indo-Pacific: “The drainage area of the Indian Ocean covers the west coast of Africa upto Somali land, the south eastern coast of Arabia, the southern coast of Persia and Baluchistan, the western coastline of Burma, Malaya and Insulin India (Insulin India was the term used to describe the Indonesian archipelago). The whole area is strategically of the greatest importance as it is the highway of European nations to India, the Far East and Australia.”

For Panikkar, the shift from the Atlantic to the Pacific was a pivotal development for the Indian Ocean but this meant that the onus was on India to harness the full potential of its geopolitical location. This meant, more than anything else, developing a maritime consciousness and a fuller consciousness of its oceanic heritage.