Advertisement
Home / Opinion / Letters to the Editor: The rat race to join 'godi' media is appaling

Letters to the Editor: The rat race to join 'godi' media is appaling 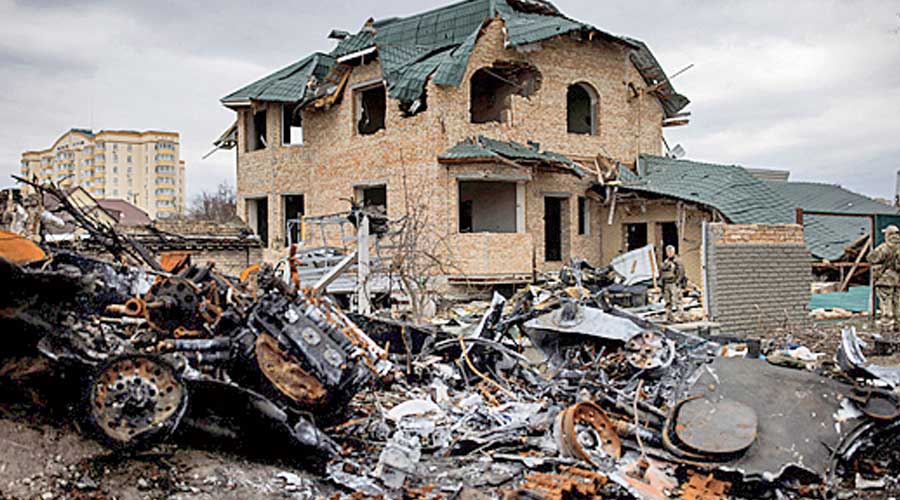 Ukrainian soldiers inspect a destroyed house, amid Russia's invasion of Ukraine, in Bucha, in Kyiv region.
File picture
The Telegraph   |   Published 10.04.22, 12:26 AM

Sir — It is no secret that the ruling party and its acolytes tend to see red at the slightest mention of anything associated with Islam, be it the hijab or the azan. A reporter of a private news channel was recently found heckling a Haldiram’s employee for packaging instructions on a product written in Urdu. While her argument that the company was “hiding” something from the public was absurd, her attempts at exacting a response from the employee were nothing short of harassment. Yet, her behaviour does not really surprise anyone given the rat race to be a part of godi media.

Sir — The massacre committed by the Russian soldiers in Bucha is shocking. The president of Ukraine, Volodymyr Zelensky, has accused the Russian forces of committing a genocide in Bucha, where mass graves were discovered — images show some of the corpses with their hands tied behind their backs — following the Russian withdrawal. The “war criminals” apparently not only pillaged homes but also raped women in front of their children (“They killed families: Zelensky”, April 6). These atrocities must be condemned.

Moscow has denied the charges and instead sought to blame Ukraine for staging the incident. An independent investigation into the massacre must be ordered to bring the perpetrators to book.

Sir — India is right to condemn the gross human rights violations in Bucha and support the call for an independent probe. Since the beginning of the Russia-Ukraine war, New Delhi has maintained a non-aligned stance. The condemnation is, thus, expected to soothe the West, which has raised concerns about India’s neutrality. However, India’s refusal to pick sides and prioritize the path of diplomacy is wise.

Sir — Trying to remain neutral in the Russia-Ukraine conflict — hundreds of lives have been lost already — may be prudent for India diplomatically, but it is not enough if New Delhi wants a seat at the global table. India must do everything in its capacity to help mitigate the crisis.

Sir — It was shocking that a journalist who had been accused of assaulting a home guard of a police station was found chained to a hospital bed in Balasore with a leg-cuff (“Odisha journalist leg-cuffed in hospital”, April 8). Loknath Dalei, who is known to have earned the wrath of the local administration for taking up burning issues such as illegal drug trafficking, was admitted to the hospital after allegedly being manhandled by the police.

The incident again brought to light custodial excesses in the country and triggered outrage against the Naveen Patnaik government. Dalei’s restrainment not only hints at police vendetta but also reveals a nexus between the police and the mafia. The authorities must take action against the officials responsible. A high-level inquiry must be ordered at once.

Sir — The prices of essential commodities are skyrocketing each day. Additionally, the abnormal hike in fuel prices — about 10 times in the past 12 days — is causing great discomfort. The chief minister of West Bengal, Mamata Banerjee, must be lauded for her attempts to alleviate the burden of the common people (“Didi bid to rein in prices”, April 8).

The subsidies on the prices of fruits and vegetables at the Sufal Bangla outlets are welcome initiatives. Banerjee was also right to accuse the Central government of starving the states of the goods and services tax compensation. Arbitrary hikes in toll tax are adding to the economic woes of states.