Advertisement
Home / Opinion / Letters to the Editor: The phenomenon known as ‘emotional spending'

Letters to the Editor: The phenomenon known as ‘emotional spending' 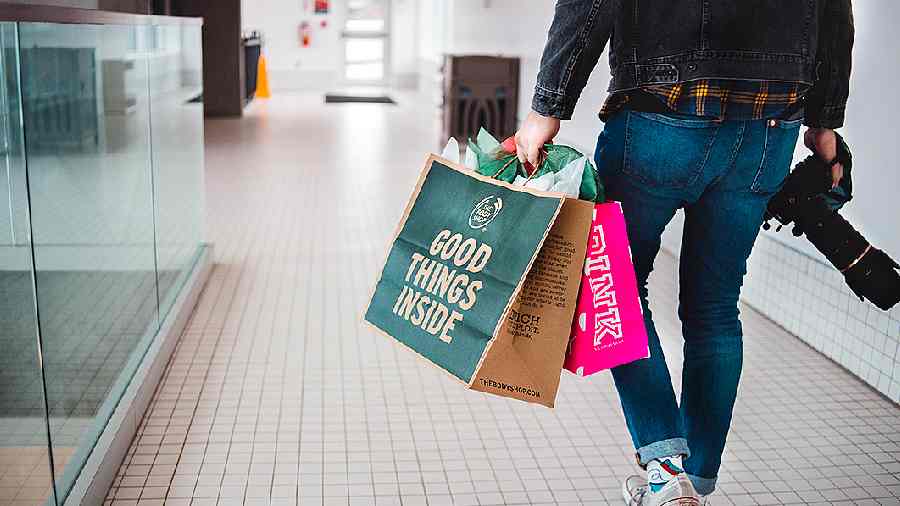 A significant number of people have either seen a dip in their income since the outbreak of the pandemic or are chronically underpaid
Representational picture
The Editorial Board   |   Published 29.06.22, 02:47 AM

Sir — The Covid-19 pandemic has exacerbated a wellknown phenomenon known as ‘emotional spending’. Even before the pandemic, many would splurge on a new article of clothing or a pint of ice cream to lift their mood. But the ease of online shopping and the lack of human contact as well as other rewarding social activities have made people more prone to impulsively buying things that they do not need. However, ‘emotional spending’ can only temporarily soothe heartache while increasing financial stress. A significant number of people have either seen a dip in their income since the outbreak of the pandemic or are chronically underpaid. Any mindless spending will only lead to humongous debt. We must find healthy ways of coping with emotional crisis.

Sir — Soon after the Supreme Court held up a special investigation team’s clean chit to the prime minister, Narendra Modi, and 63 others in the Gulbarg Society case of the 2002 Gujarat riots, the human rights activist, Teesta Setalvad, and the whistle-blower police officer, R.B. Sreekumar, were arrested by the Gujarat police. The apex court had observed that many people are guilty of the “abuse of process” and had kept the “pot boiling for ulterior design”. It is unfortunate that those seeking justice for the victims of the Gujarat massacre have to face such trials and tribulations.  In 2004, a bench of the Supreme Court had quashed the acquittal of all 21 accused in the Best Bakery massacre case and had ordered a retrial. The bench also criticised the Gujarat High Court for its “irresponsible” statements against Setalvad and other activists and expunged those remarks. But now the situation has changed. Setalvad and Sreekumar have a long fight ahead.

Sir — The arrest of Teesta Setalvad for allegedly stirring the controversy around the Gulbarg Society massacre — 69 people died at the hands of a frenzied mob, including a Congress leader, Ehsan Jafri — is alarming. The Supreme Court’s dismissal of the plea of the wife of the slain Congressman, Zakia Jafri, challenging the SIT clean chit to the then chief minister of Gujarat, Narendra Modi, is also disheartening. Many are worried at the turn of events.

Sir — While delivering a lecture on the Indian economy and the role of education in Purulia, Kaushik Basu, the C. Marks Professor of international studies and professor of economics at Cornell University, said that the pursuit of hawkish nationalism was detrimental to the growth of a country’s economy (“The high price that hyper-nationalism exacts”, June 24). The revered economist referred to the history of Argentina. The country had a booming economy in the 1920s and was one of the wealthiest nations at the time. But the rise of hyper-nationalism led to its downfall in the 1930s. Hyper-nationalism leaves no room for critical engagement in any sphere of life and leads to conflict among different sections of society. Over the years, northern India has become the hub of shrill nationalism as opposed to the southern states. This is perhaps why the southern states have outperformed the north in terms of gross domestic product. Basu’s words should act as a warning to those pursuing aggressive nationalism at the cost of economic growth.

Sir — It is heartening that The Lancet has found that extensive Covid-19 vaccinations have averted about 42 lakh potential deaths in India in 2021. The government must be lauded for undertaking the vaccination programme on a war footing. The cumulative Covid-19 vaccine doses administered in the country have crossed 196.44 crore. India was also at the forefront of vaccine diplomacy. The Indian government’s decision to export vaccines has prevented the death toll from climbing in the recipient countries as well.

Sir — Punnathur Kotta, a fort and former palace that now houses the elephants belonging to the Guruvayur temple, has appointed its first female manager in history. C.R. Lejumol, a longtime administrative staff of the temple, will be in charge of the upkeep of the 44 elephants that were donated to the temple by devotees at different times.  The management and care of elephants is a challenging task. The elephants receive a special wellness package in July, known as the Sughachikilsa. They are fed a special diet and provided necessary medication. It is hoped that Lejumol, who comes from a family of mahouts, will be able to handle the challenges of the job.

Sir — The tennis superstar, Sania Mirza, is the only Indian player who will participate at the Wimbledon main draw this year (“Sania lone Indian left in Big W fray”, June 22). It is Mirza’s last year on tour. One hopes that the former doubles world number one will perform superbly in the women’s doubles with her partner, Lucie Hradecka, and clinch the trophy.

Sir — The Wimbledon draw is favourable to both Novak Djokovic and Rafael Nadal this year. The two will only play against each other if they reach the finals. It is unfortunate that Daniil Medvedev will miss the tournament as the All England Club has barred all Russian and Belarusianplayers. Roger Federer, too, will not be playing at Wimbledon. A number of fan-favourites will be missing the Wimbledon this year. This has given young players the rare opportunity to showcase their skills.