Advertisement
Home / Opinion / Letters to the Editor: The downsides of extravagant holiday meals

Letters to the Editor: The downsides of extravagant holiday meals 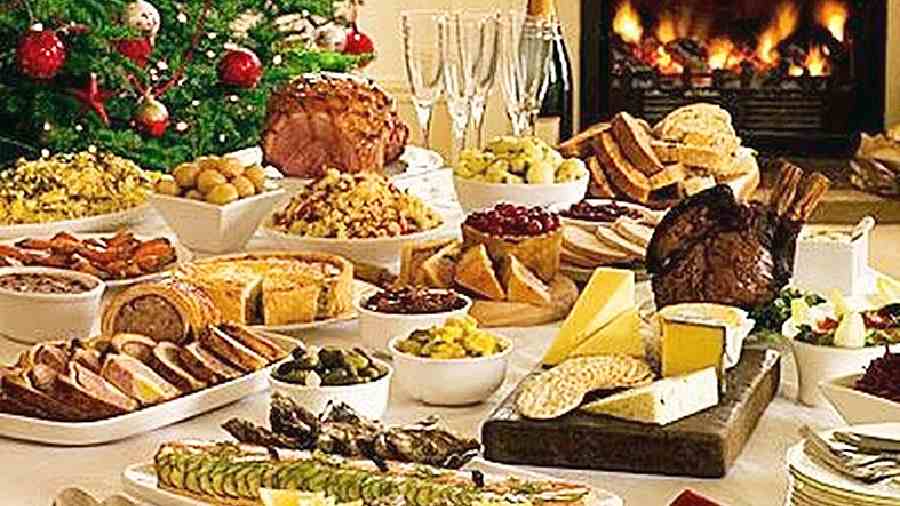 Studies have shown that such overindulgence can negatively impact our well-being as binge eating leads to more stress over gaining ‘holiday weight’
File picture
The Editorial Board   |   Published 06.12.22, 04:45 AM

Sir — December marks the beginning of year-end festivities. But what seems like a festive treat — gorging on hors d’oeuvres, sugary desserts and calorie-rich meals that are synonymous with the holiday season — is, in fact, stress-eating induced by family gatherings and peer pressure. Studies have shown that such overindulgence can negatively impact our well-being as binge eating leads to more stress over gaining ‘holiday weight’. While it is prudent to strike a balance by moderating one’s food intake, breaking the vicious cycle of stress and bingeing is easier said than done. However, given the global economic slowdown and the resultant austerity measures and rise in prices, revellers might not have an option but to cut down on indulgences this year.

Sir — The Supreme Court has expressed displeasure at the continued criticism of the collegium system by the Union law minister, Kiren Rijiju. It also suggested that the Centre has been delaying judicial appointments out of resentment towards the top court for quashing the National Judicial Appointments Commission (“SC issues ‘Rubicon’ warning”, Nov 29). This is disconcerting. It does not behove a senior minister like Rijiju to take potshots at the collegium system, which has been in place for almost 30 years. The former law minister, Ravi Shankar Prasad, too, had advocated the revival of the NJAC. But the NJAC will erode the independence of the judiciary. The separation of powers is a prerequisite for democracy.

Sir — It is unfortunate that the Centre and the judiciary have been engaged in bitter exchanges over judicial appointments. The Centre has repeatedly raised doubts about the collegium system of appointing judges. However, its reservations cannot justify sitting on the court’s recommendations. These differences are only disrupting judicial processes.

Dubious claim  Sir — India’s permanent representative to the United Nations, Ruchira Kamboj, has claimed that freedom of the press in India is as strong as ever (“Relax Ravishji, trust the Shakyas”, Dec 3). This is a desperate attempt to hoodwink the international community. Several global surveys have repeatedly flagged concerns about the erosion of press freedoms in India. Such apprehensions were recently consolidated with the hostile takeover of NDTV — one of the last bastions of independent media — by the Adani Group, which is known to be close to the party in power at the Centre. Indian representatives to global forums should not make such false claims.

Sir — Ruchira Kamboj’s assertion that the “Fourth Estate is intact” in India is patently untrue. The fact that India fell eight spots to rank 150 among 180 countries on the World Press Freedom Index 2022 is a testament to the deplorable state of the Indian media. Kamboj’s staunch defence is an attempt to convince the world otherwise. This is highly unethical and not befitting her position.

Sir — Samantha Dixon, a member of Britain’s Labour Party, has triumphed over her Conservative opponent in the bypoll to the Chester seat by a record margin. This will make it even more difficult for the newly-appointed prime minister, Rishi Sunak, to retain power in the next general election (“Labour wins byelection in blow to Rishi”, Dec 3). The Tories are already trailing in most opinion polls. Further, the former chancellor of the exchequer, Sajid Javid, has announced that he would step down as a member of Parliament in the next election. Sunak now has the formidable task of not only putting his metaphorical house back in order but also convincing people that he is the right leader to steer Britain through one of its most tumultuous periods.

Sir — The Reserve Bank of India recently rolled out India’s e-rupee, the Central Bank Digital Currency, on a pilot basis. This is a welcome step. The adoption of the Unified Payments Interface in retail has created a huge demand for digital transactions. The CBDC is similar to regular currency notes issued by the central bank, but electronic in form. It will provide an impetus to the Centre’s ‘Digital India’ campaign. Unlike cryptocurrencies, which are vulnerable to scams and security breaches owing to their speculative nature, the CBDC is a legal tender. However, the government and the central bank must address concerns regarding data security and currency volatility so that the true potential of the digital rupee can be realised.

Sir — According to a nationwide survey, over a quarter of adolescents aged 13 to 17 years spend more than six hours per day on smartphones or digital devices. This is worrying. Long hours of exposure to gadgets lead to health problems, negatively impact attention span and sleep patterns, as well as cause mental health issues. The digitisation of education is also responsible for the over-dependence on digital devices. It is up to parents to monitor the number of hours children spend on their smartphones. Encouraging them to play outdoor games and spending quality time with children can be one way of weaning them away from the digital world.

Sir — Adults are as vulnerable to smartphone addiction as teenagers. The more people retreat into their devices, the more they are alienated from the world around them.