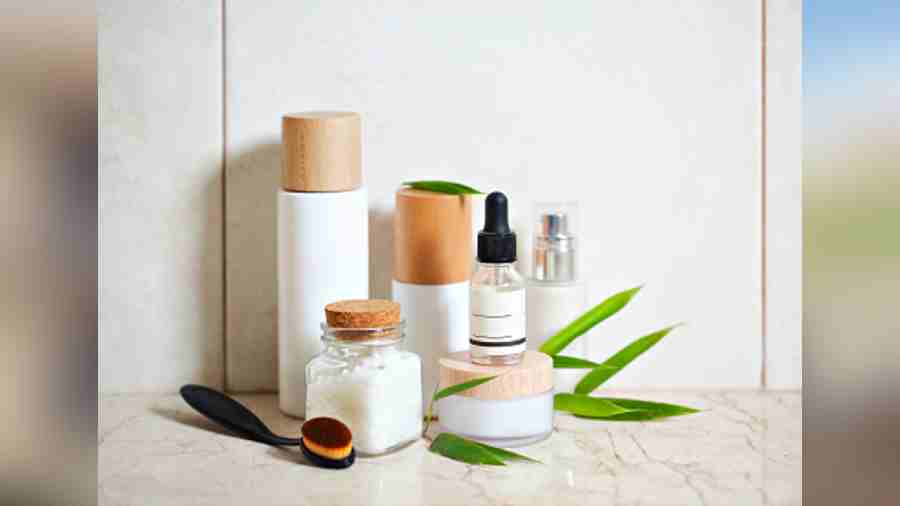 Sir — Women are constantly faced with a barrage of advertisements for beauty and skincare products. New products are being launched by celebrities every other day. Most of these products are exorbitantly priced, even when they claim to contain local ingredients that are relatively cheap. Take, for instance, Deepika Padukone’s recently-launched self-care brand, 82E. The 82E patchouli  sunscreen costs Rs 1,800 and the ashwagandha moisturiser Rs 2,700. The market price of these ingredients is a fraction of what the products cost. To sell such allegedly ‘local’ skincare solutions at such high prices is preposterous. Skincare for most people is a question of ensuring basic hygiene. Marketing gimmicks link it to appearances in a detrimental way.

Sir — India has submitted its Long-Term Low Emission Development Strategy at the 27th Conference of Parties, laying out the roadmap for a gradual transition from fossil fuels to sustainable energy sources. According to the Global Carbon Budget Report 2022, India is among the top four carbon emitters. The government has rightly selected green hydrogen as one of the alternatives to meet its emission targets by 2030 and 2047, respectively. But merely strategising is not enough. Industries, pollution control bodies and the government must work together to ensure a shift to cleaner energy sources.

Sir — The Democrats in the United States of America received the best mid-term results of a presidential party in the last two decades. Most people had predicted significant losses for the ruling party owing to high inflation, rising unemployment and a recession being imminent. But the Democrats, led by the president, Joe Biden, wrested control of the US Senate after the surprise win of Catherine Cortez Masto in the key state of Nevada (“Democrats defy odds to clinch Senate control”, Nov 14). However, Republicans have the majority in the House of Representatives. Significantly, the candidates endorsed by the former president, Donald Trump, have all failed to make a mark. This shows Trump’s waning influence in the country.

Sir — Voters spurning the Republican candidates backed by Donald Trump is an indictment of his troubled legacy, which includes the insurrection at Capitol Hill after his defeat in the presidential elections. This was also the first election since the US Supreme Court overturned Roe versus Wade, which guaranteed a constitutional right to abortion. Results show that voters are mostly in favour of abortion rights even in Republican strongholds. The rejection of the restrictions on individual freedom is laudable.

Sir — Donald Trump has announced his candidacy for the 2024 presidential elections in spite of the poor performance of his candidates in the mid-terms. The former president is facing a slew of criminal investigations at present. His bid for the presidency can thus be seen as an attempt to protect himself from the charges (“Hasty Trump to contest again”, Nov 17). But with the Republican candidate, Ron DeSantis, pulling off a major victory in the crucial state of Florida in the mid-terms, it seems that the Republican primaries will not be a cakewalk for Trump.

Sir — The mayor of Calcutta, Firhad Hakim, has said that the police commissioner, Vineet Goyal, has been sitting on his letter seeking action against hawkers. Hakim has alleged that there is a nexus between some sections of the police and the hawkers, allowing the latter to flout rules with impunity (“Top cop inert on my letter: Mayor”, Nov 19). While Hakim’s concerns are legitimate, the fact that hawkers also enjoy tacit patronage from several political leaders cannot be dismissed. The city’s footpaths have become off-limits for pedestrians as a result of the hawkers’ stalls. The civic authorities and the police must work together to check illegal encroachment on pavements.

Sir — It was disheartening to read that roadside stalls have gobbled up the footpaths across key market areas in Calcutta (“Hawking rules flouted across market areas of city”, Nov 20). Mumbai, too, is no stranger to the hawker menace. It is the negligence of the respective municipalities and the police that has allowed these stalls to mushroom. Adequate policies and punishments must be framed to check encroachment by hawkers.

Sir — The interview of Ravindra Singh Bisht, a leading archaeologist who led excavations at settlements from the Indus Valley Civilisation, was enlightening (“‘The British trained us to appreciate our culture’”, Nov 20). Bisht spoke about how the raj, which exploited India and its riches, was also instrumental in discovering, preserving and promoting ancient Indian culture. But the dispensation at the Centre is intent on erasing many of these contributions. Its efforts to shunt the English language is one example of this. The replacement of English with Hindi, one of the pet projects of the Bharatiya Janata Party, will set India back several years.

Sir — The contributions made by the British in preserving ancient Indian culture cannot be reason enough for justifying their rule in India. Moreover, these efforts were by a handful of individuals, not the administrative machinery of the raj at large. The empire survived by looking down on and denigrating subcontinental history. This is a fact that cannot be overlooked.