Letters to the Editor: Responsible policy actions needed not embraces 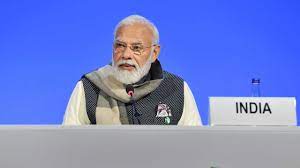 Sir — At a time when the entire world is trying to escape the deathly embrace of Covid-19, the prime minister of India has let his preferred form of greeting upstage the need for social distancing. Narendra Modi’s awkward attempt to hug several world leaders, including Antonio Guterres, the secretary-general of the United Nations, at CoP-26 in Glasgow has drawn public ridicule. The prime minister would do well to portray unity and solidarity with other world leaders through responsible policy actions rather than through physical embraces. Tellingly, at the same summit, when 105 countries signed a proposal to halt deforestation and land degradation by 2030, India refrained from joining them shoulder to shoulder. Such basic differences in attitude cannot simply be hugged out.

Sir — It is specious to gauge the political mood of a country as large and diverse as India from the results of the bypolls of 30 assembly and three Lok Sabha seats (“Didi’s last laugh”, Nov 3). The results, however, are not good news for the Bharatiya Janata Party governments in Himachal Pradesh and Haryana — both of which have witnessed farmers’ agitations in the recent past.

The farm protests cast a shadow on the BJP’s performance in Rajasthan too, where it was relegated to the third and fourth spots in the two seats. In West Bengal, the BJP performed so abysmally that it was competing with the Communist Party of India (Marxist) for the second spot in two of the four seats. Interestingly, any third force fared poorly in these contests. The Janata Dal (Secular) was wiped out in Karnataka’s Hangal, securing a measly 0.54 per cent votes. It managed 2.66 per cent of votes in Sindgi, which the BJP won, and the Congress was second.

Sir — The manner in which the Trinamul Congress won all four seats in the Bengal bypolls is laudable. It amassed 75 per cent of the votes polled, while the BJP got only 14.5 per cent. Its decision to focus on public welfare yielded a clear victory. It is a pity that even Nisith Pramanik, a Union minister, could not help the BJP in Dinhata. The TMC’s win is likely to help it bring together all Opposition parties at the national level. The BJP should get to the root of the crisis that led to its performance in Bengal.

Sir — The defeat of the BJP in Bengal in the recent bypolls reflects the political mood of Bengal. The policy of propagating Hindutva as an ideology and intolerance will not be effective here. One can see a spark of hope for the Congress as well — it bagged four seats in Himachal Pradesh. The times are changing and it is the people who are bringing the change.

Sir — The BJP’s win cannot be stopped in 2024 if there is no unity among the Opposition. The TMC’s pretence of having a pan-India presence is just a ruse. Outside Bengal, the TMC is unlikely to win a single seat.

The party, backed by Bengal media, is going to the polls in Tripura and Goa, two states where the main challengers of the BJP are the CPI(M) and the Congress, respectively. Here, most sections of the media are stunningly silent on the political activities of the other parties — they focus only on the TMC. This leads to speculations on whether Indian politics is being dictated by corporate lobbies. The surrender to corporate interests will harm democracy and pluralism. The hype created in favour of the TMC is damaging the prospects of the Opposition in Goa and Tripura. This will only help the BJP emerge victorious.

Sir — Mamata Banerjee’s  winning streak continues unabated. The BJP candidates from three seats — Dinhata, Khardah and Gosaba — failed to achieve even the required 16.6 per cent of the votes to retain their deposit money. The BJP has to accept that it has been rejected by the people of Bengal. Banerjee has been expanding her presence in other states as well. One wonders what the BJP’s national vice-president, Dilip Ghosh, who is known for his snide remarks, has to say after this ignominious defeat.

Sir — Amidst threats of cybercrime from China, the news about the alleged use of Israeli spyware, Pegasus, for surveilling journalists, politicians, social activists and even students around the world is frightening (“Fresh air”, Oct 29). As the government and the Opposition parties debate the use of the spyware in India, the Supreme Court’s decision to constitute an expert committee for an in-depth probe into the matter is welcome. Science and technology can be used as tools to improve the lives of people. But some nations seem to be bent upon abusing these for political supremacy.

Sir — The Supreme Court’s decision to form a committee to probe the Pegasus scandal assumes great significance as the Centre is yet to take a clear stand on the boiling issue.

Based on the prohibitive cost of the software and those targeted, the needle of suspicion seems to point at the ruling BJP. Further, The Guardian reported that the numbers “strongly indicate that intelligence agencies within the Indian government were operating the system”. This cannot be taken lightly. As citizens vulnerable to such threats without adequate accountability from the government, we need to start pushing to bring surveillance within our legal framework. Meanwhile, the allegations, if proved true, bode dangerously for the health of our democracy.

Sir — After the recent move of standardizing the process of fixing accountability for non-performing assets for public sector bank employees, expected to allow these employees to work more freely without the fear of loan default, the arrest of the former State Bank of India chief, Pratip Chaudhari, is shocking (“Ex SBI chief arrested”, Nov 3). The Gaudavan Group account was transferred to an asset reconstruction company after it became an NPA following due process. One wonders why Chaudhari was arrested after so many years. There seems to be more to it than meets the eye. The government must intervene in this case so that bankers do not become edgy once again.