Letters to the editor: Recent flooding in Bengal 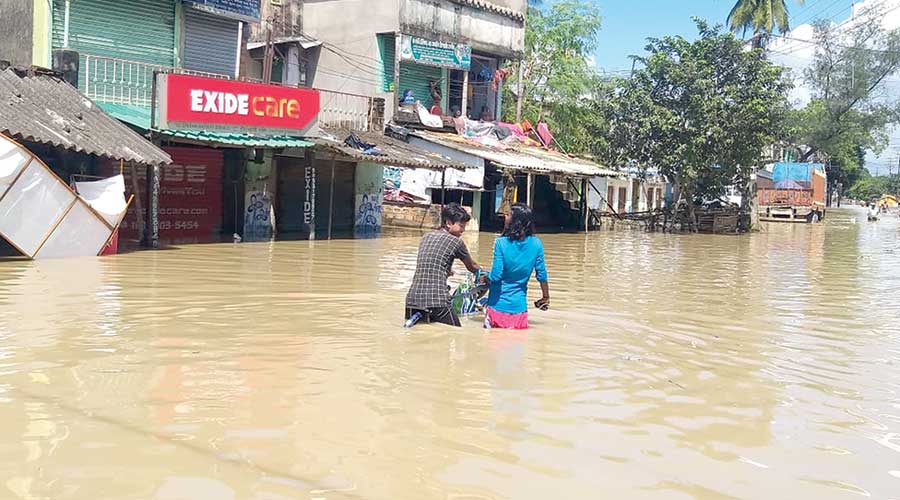 Buildings flooded in Howrah on Friday following the release of water by the DVC.
Amit Kumar Karmakar
The Telegraph   |   Published 08.10.21, 02:35 AM

Sir — The recent flooding in Bengal, following the release of dam water by the Damodar Valley Corporation, has affected nearly 22 lakh people (“Drowned”, Oct 5). The loss of property and damage to agriculture are substantial. The immediate response of those who are accountable is to pass the blame.

The Damodar — dubbed the ‘Sorrow of Bengal’ —  has several dams and barrages in order to control the water flow for irrigation and power generation. During monsoon, water needs to be released to keep the dams from bursting and flooding the entire downstream region. The body responsible for doing this, the DVC — a Central organization — should take steps to alleviate the misery of the people, especially the downstream area. The modernization of dams and de-silting programmes need to be undertaken at once.

Sir — Twenty blocks in South Bengal have been badly affected by the floods. The chief minister, Mamata Banerjee, has blamed the Centre for this situation. But this allegation may not hold water. The DVC authorities are compelled to release excess water from dams after heavy rains.

The fact that Banerjee had previously talked to the Centre about the need for de-siltation of the dams has given the state government a golden opportunity to put the blame on the Centre. But this is an expensive project. Further, it requires a huge tract of land to stockpile the silt, which was not readily available.

Sir — As always, the Centre and the state government have begun blaming one another for the floods that have affected lakhs of people. But neither party can fool the people into believing that it stands for public good unless concrete action is taken to prevent such incidents in the future. The common people are treated like pawns by political leaders. No financial compensation will be enough for the losses they have suffered.

Sir — Only a thorough investigation will reveal who is accountable for the disastrous South Bengal floods. The passing of the buck must stop. Both the Centre and the Bengal government must join hands to save the people from the aftermath of the deluge.

Sir — It is unfortunate that while one part of Bengal’s population is gearing up for Durga Puja, another part has lost whatever little it had to the floods. While the government must ensure that financial compensation reaches every affected household, the common people, too, could spare a thought for the flood victims. Several organizations are at work, trying to reach out to them with relief material. One must contribute whatever one can.

Sir — The recent six-hour outage of Facebook, Instagram and WhatsApp caused users to panic. After all, WhatsApp and Facebook Messenger are apparently the most used instant messaging apps in a large number of places. This panic could have been avoided. A fundamental feature of the internet is its decentralized structure — there are always multiple avenues of completing an action, whether with another email client, search engine or messaging app. Over-reliance on any particular service is bound to cause such problems. History has taught us that monopolies are never a viable option; this lesson should guide our outlook towards the internet.

Sir — The world almost came to a standstill when Facebook, WhatsApp and Instagram stopped functioning for six hours. The owner of these apps, Mark Zuckerberg, climbed down on the list of the world’s richest people by losing millions on account of the outage.

The response from users proves how dependent we have become on social media apps — these days, human life seems unimaginable without them.

Sir — Indian shops are not the only ones bursting at the seams. With the ‘back-to-school season’ in full swing, the retail sector in the West has recovered somewhat from the hits it took during the lockdown. For instance, the apparel brand, Levi Strauss, revealed that its profits have picked up 56 per cent over 2019. It was especially tough on the clothing industry, since the purchase of outdoor apparel fell by a massive margin. But while big brands will be able to get back on their feet quickly, smaller brands are unlikely to survive the losses incurred. Governments must come up with a safety net for them.

Sir — Hearteningly, the government has decided to form an expert committee to set a national minimum wage for all casual workers. Attention needs to be paid to the plight of domestic workers. A minimum wage of at least Rs 60 an hour must be made compulsory for such workers with one day off per week.