Letters to the Editor: Local flavours are gradually fading into oblivion 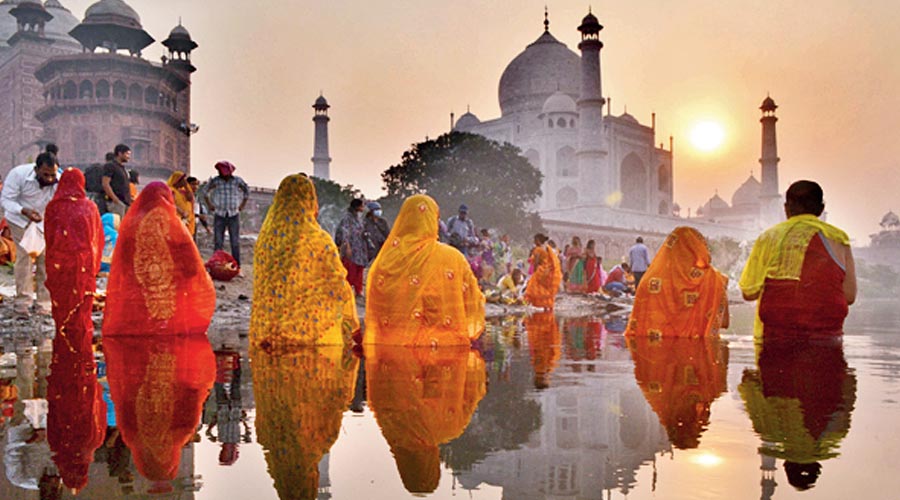 Devotees offer prayers during sunset along the banks of River Yamuna during 'Chhath Puja', near Taj Mahal in Agra
PTI Photo
The Telegraph   |   Published 07.12.21, 12:48 AM

Sir — Perhaps the best way to understand a culture is through its food. Recently, Google Doodle celebrated the introduction of the art of making Neapolitan pizza — no other food is more representative of Italian cuisine — in Unesco’s list of intangible cultural heritage in December, 2017. Earlier, the Arabic coffee and the North Korean kimchi-making tradition had found their place on the list. Given its cultural diversity, India, too, is rich in culinary traditions. But with the advent of international fast-food chains and a generation relying increasingly on them, local flavours — these impart to food its distinct taste and smell — are gradually fading into oblivion. The present generation should save these recipes.

Sir — Following a case of mistaken identity where the security forces opened fire on civilians in Nagaland’s Mon district, 14 people have been killed and 11 injured in three consecutive incidents of violence (“Forces kill 14 civilians in botch-up, case filed”, Dec 6). Although the army has ordered an inquiry into the matter, this is not the first time civilians have lost their lives in the conflict-ridden region. Certain states in the Northeast continue to be under the Armed Forces (Special Powers) Act.

The Union home minister, Amit Shah, and the chief minister of Nagaland, Neiphiu Rio, have assured justice to the families of those who have lost their lives. But such an incident should not have happened in the first place. The accused personnel should be investigated and those responsible must be aptly punished.

Sir — The simmering trouble in the Northeast, including interstate border tensions as well as separatist demands, is a cause for concern. India already has long-standing border disputes with Pakistan and China along the Line of Control and the Line of Actual Control. Furthermore, problems in the Northeast and Kashmir tend to be fanned by our neighbours. The firing in Mon district is bound to agitate the people of Nagaland and rightfully so. The Centre must not overlook the sentiments of the Naga people and should address their concerns sensitively.

Sir — Rahul Gandhi has shown exemplary political maturity and courage throughout the tenure of the incumbent prime minister, Narendra Modi, by pointing out the missteps of the Bharatiya Janata Party-led government. Modi has brought the country to its knees with demonetization, mishandling of the Covid-19 pandemic, inability to alleviate communal disharmony, Citizenship (Amendment) Act and many other things. Rahul Gandhi was untiring in his efforts to push the government to withdraw the three contentious farm bills and has now lent his support to the farmers’ demand for a law on minimum support price.

Rahul Gandhi has been constantly criticized over the last decade but there is no doubt that, as of now, he is one of the most credible voices against the BJP. It is unfortunate that the Trinamul Congress chief, Mamata Banerjee, thinks that the United Progressive Alliance does not exist any more. Rahul Gandhi is crucial in any effort to dismantle the BJP.

Sir — Both the Bengal chief minister, Mamata Banerjee, and her trusted adviser and poll strategist, Prashant Kishor, have been critical of the Congress machinery. But they must understand that in spite of its waning fortunes, the Congress still has a wider network of party workers at the grass-root level, cutting across states, than any other party in the Opposition. Alienating the Congress in a fight against the BJP would be a blunder. All Opposition parties need to come together for the 2024 assembly elections.

Sir — In spite of rising concerns over the detection of Omicron in the country, mask compliance in India remains woefully low. A survey conducted by a digital community based platform, LocalCircles, reported that one in three Indians does not carry a mask while stepping out of his or her home.

The government has constantly run campaigns to spread awareness about Covid safety protocols, but to no avail. It is time-consuming to fully vaccinate all citizens of a country as populous as India. Even complete vaccination is no guarantee against the disease. People must not be negligent.

Sir — With the total tally of Omicron cases crossing 20, people in India are, once again, worried that the virus will wreak havoc on their lives. Both the Centre and state governments must amp up healthcare facilities and reassure people that they are prepared for any sudden uptick in cases. The country cannot afford any more nationwide lockdowns. The government as well as citizens will need to be cautious in the upcoming months.

Sir — The third wave of Covid-19 seems ready to hit India. Is the nation ready to combat it?

Sir — It was eye-opening to learn that a recent study has found that the hydrogen sulphide released from the polluted waters of the Yamuna has a more corrosive impact on the Taj Mahal than the sulphur dioxide emitted by the factories in Agra. So far, measures adopted to protect the Taj Mahal have largely focused on decreasing industrial and vehicular pollution. This finding will now compel policymakers to reassess the matter and figure out a holistic solution to the problem.