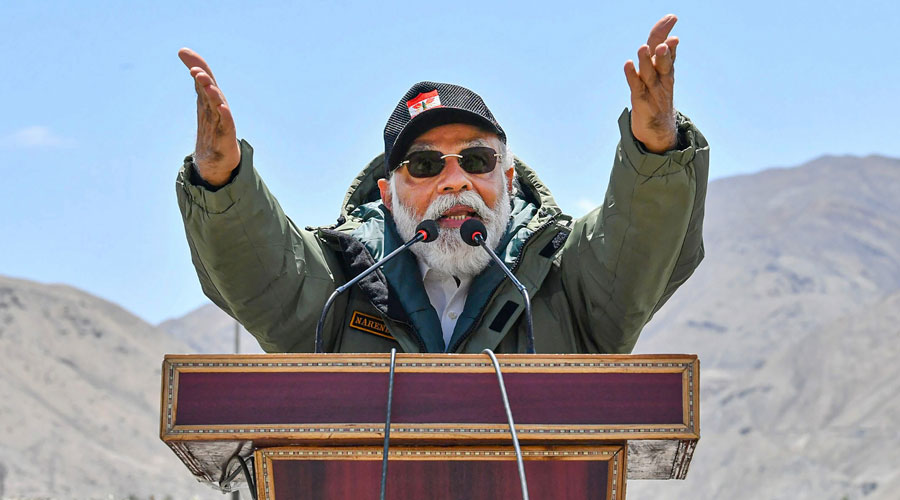 Sir — The prime minister, Narendra Modi, sprang a surprise with his sudden Ladakh visit. It was primarily meant to be a gesture of solidarity with the armed forces in order to boost the morale of soldiers guarding the borders at high altitudes. But before lapping up the meticulously choreographed visit, Modi’s ardent supporters should consider the serious rupture in relations with a neighbouring country. It is not advisable to underestimate China by thinking that it was ‘spooked’ and ‘rattled’ by Delhi’s hard-line position vis-à-vis Beijing’s territorial claims.

But it must be admitted that Modi’s address to soldiers in Ladakh was replete with multiple messages, in sharp contrast to his cagey speech at the end of his online meeting with Opposition leaders in which he did not admit to any intrusion into India having taken place. The general tenor of his rousing Ladakh address indicated that he was salvaging the situation and asserting India’s position on border disputes. The thrust of the address was that countries should renounce territorial expansionism and seek peace and prosperity. Although the prime minister did not name China, his allusion to ‘expansionism’ left no one in any doubt about the country he had in mind.

It is true that the gestures of amity made by Modi towards the Chinese president, Xi Jinping, to build better relations between India and China did not yield the desired results. Yet, it is important to make efforts to bring about a rapprochement between the two countries. War is not an option because of the terrible cost it exacts in terms of death and suffering.

Sir — Narendra Modi’s visit to Ladakh ended up being a philosophical introspection on life rather than a strong political message to China. Why is he always hesitant to mention China’s name? China has no such qualms while warning India off.

While Modi is trying to take credit for India’s diplomatic move against China in the form of banning 59 Chinese apps, it is doubtful that this will have any far-reaching impact on the Chinese economy. Moreover, can the void left behind by the Chinese apps be filled by indigenous companies immediately? It is clear that the ban has been imposed because this is easier than banning products that people rely on in their daily lives. Does the cash-strapped Modi government have the courage to do what it takes to protect India’s territorial sovereignty? Only time and the actions of the government will tell.

Sir — India has lost 20 soldiers to a war which has not even begun. It remains to be seen if this war can be won diplomatically. The prime minister should stop being ambiguous about the issue. In an all-party meeting, Narendra Modi declared that no intrusion had taken place in the Galwan Valley. How is this believable? If the Chinese troops did not cross the Line of Actual Control how did they kill Indian soldiers? China has already put Modi’s faux pas to good use, claiming that Chinese troops did not make incursions into Indian territory.

It is not surprising that truths about the territorial integrity of India and that of other countries are selectively highlighted. The allegedly concocted stories of a surgical strike in Balakot and the Pulwama attack were repeated over and over again to win the 2019 general elections. But this time around, if the truth of China’s military aggression is exposed, people will lose faith in the strongman politics of the Modi government.

That China is many times stronger in military might than India is no secret. So coercion cannot be an alternative to sharp-witted diplomacy to subdue China. But India’s diplomatic strength has been eroded away by the current dispensation. India’s economy, too, cannot compete with that of China; goods from our eastern neighbour dominate our markets. Any action against China must thus be taken carefully and judiciously. That China has occupied Indian land in Galwan Valley and reportedly built many underground bunkers there came to light only after the face-off between the troops of the two countries. India was caught napping once, it should not happen again.

Sir — Narendra Modi’s hollow rhetoric does not fool anybody anymore. Over the years, the policy missteps of his government have weakened India’s position in the Southeast Asia region. Each time it has snubbed a neighbour — Bangladesh was not happy with the Citizenship (Amendment) Act — it has strengthened China’s hand. It is too late to make amends.

Sir — Monsoon evenings spent at home were once unimaginable without a hot cup of tea along with an assortment of fritters like beguni, peyaji, phuluri, daler bora or at the very least piping hot singaras. But given the pandemic and the attendant concerns regarding hygiene, few people are ready to risk buying these goodies from street-side stalls. Making these at home is time-consuming and impossible for those already treading a fine line between work and household chores. Even though the entire family is at home, the evening tea is now a rushed affair between shooting off work emails.