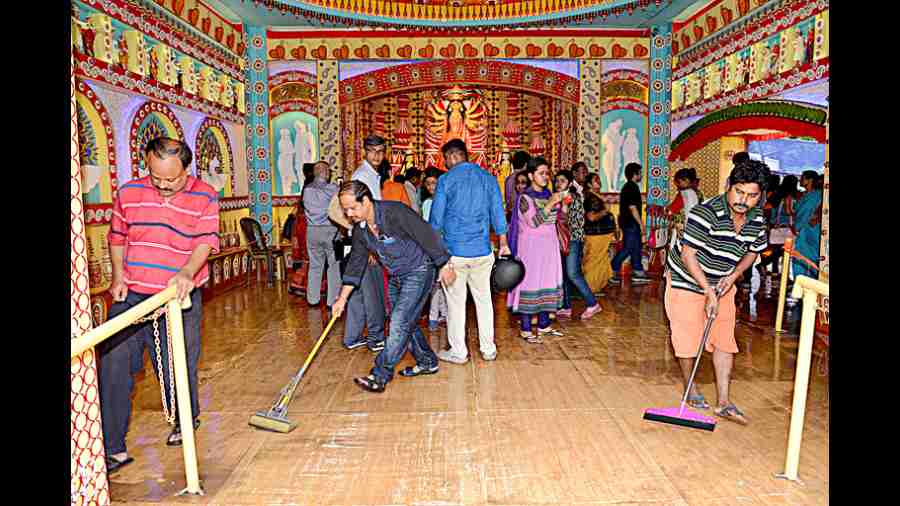 Rain on the parade

Sir — In recent years, the monsoons have become erratic because of climate change. As West Bengal waits for the monsoons to arrive, the question plaguing most Bengalis is this: will it rain during Durga Puja? In the past decade, wet spells have become synonymous with the Pujas. This was not the case even twenty years ago, especially when the Pujas fell in October. Not only do the rains put a damper on pandal hopping and wearing elaborate, festive attire but unseasonal showers also damage the pandals themselves and affect the business of small vendors with makeshift shacks. Since we cannot control the weather, it would be prudent to prepare for a downpour. Perhaps galoshes and mackintoshes should be part of the pujo’r bajaar this year.

Sir — Scientists and historians are right to be concerned about the Union ministry of culture reportedly funding a project to analyse the genetic similarities and dissimilarities within the Indian population and to study racial purity (“Cry against ‘racial purity’ research”, June 11). The project comes at a time when religious fanaticism has reared its ugly head across the country. Efforts to distort Indian history are underway too. Such reports remind one of the anti-Semitic and racist ideas of Adolf Hitler. This project, if it indeed is being funded, has the potential to damage the social fabric of India.

Sir — It would be fitting if the National Democratic Alliance picks the present governor of Kerala, Arif Mohammad Khan, as its candidate for the post of the president of India (“Eager wait”, June 12). His choice may appeal not just to the Opposition but also to the Muslim population.

Sir — When I was in school, history books — many of them written by the much-maligned ‘Left’ historians — had detailed accounts of Mauryas, Satavahanas, Guptas, Cholas, Pandyas, Pallavas and so on (“Shah can’t find books on Mauryas, Pallavas...”, June 11). Alongside, we also read about the Mughal, Tughlaq, Khilji and Slave dynasties. It is true that the history of the Ahom empire was rarely discussed, perhaps because of the historical indifference towards the Northeast. But the exclusion of non-Islamic history from textbooks is not true. As for rejecting everything that is Islamic or Western in origin, the Union home minister, Amit Shah, should introspect on the linguistic origin of the word, Hindu, as well as the surname, ‘Shah’ — both have Persian influences.

Sir — Russia has long been an ally of India (“Partial truth”, June 9). But in order to counter the global hegemony of the United States of America, Russia has inched closer to China. India’s chances of getting Russia’s help in the event of a confrontation with China are, thus, slim. If Russia can look after its own interests, why can India not inch closer to the US?

Sir — The Centre was right in hiking the minimum support price for paddy by Rs 100 per quintal for 2022-23. However, such short-term measures are not enough. The country needs to diversify its crop production. Farmers must be weaned off water-guzzling crops like paddy and sugarcane and encouraged to plant oilseeds, pulses, vegetables and fruits. This will make agriculture more sustainable.

Sir — The arrest of Faisal Wani, a YouTuber from Kashmir, for posting a threatening video against Nupur Sharma is justified. But then why have Sharma and others, whose incendiary remarks have led to protests internationally, not been arrested? Prompt legal action should have been taken against them as well.

Sir — Randeep Surjewala, the Congress spokesperson from Haryana, has become the object of ridicule for confusing Draupadi with Sita. He referred to Sita while talking about the disrobing incident in the Mahabharata. This highlights a lack of elementary knowledge of the epics.

Sir — The Sports Authority of India has terminated the contract of the chief cycling coach, R.K. Sharma, for his alleged inappropriate behaviour with a female cyclist during a training camp in Slovenia. SAI has not only ensured the safety of the female cyclist but it has also called the entire Indian contingent back to avoid further controversy. Instead of focusing on their sport ahead of tournaments, female athletes are having to live in fear of being taken advantage of. Teams with female members should always have a female coach present, especially on tours.

Sir — It is unfortunate that the entire female cycling contingent in Slovenia had to pay the price for the coach’s behaviour. This speaks poorly of India on the international stage.