Stop the hate against Rhea Chakraborty 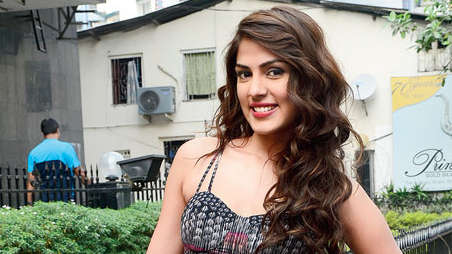 Sir — The demise of Sushant Singh Rajput has led to a lot of debate on privilege and nepotism in Bollywood. However, there were instances in which the ire was taken beyond limits. One of the people who have been in the line of fire is Rajput’s former partner, Rhea Chakraborty, who revealed that she has received rape and death threats on social media. She has since registered a first information report against two unknown people. While the outpouring of grief is understandable, it is alarming that people are resorting to violent threats. Strict laws against cybercrime must be put in place to counter such behaviour.

Sir — It was unfortunate to hear that the revolutionary poet, Varavara Rao, tested positive for Covid-19 while being incarcerated and is suffering from other ailments as well (“Days after outcry, Varavara positive”, July 17). His family had been requesting his release from prison — he was arrested in 2018 for his alleged involvement in the Bhima-Koregaon case — on account of his ill health so that he could be provided necessary medical attention.

While it was encouraging to hear that Rao had been admitted to J.J. Hospital in Mumbai — he has since been shifted to Nanavati Hospital for neurological treatment — from Taloja Central Prison, Rao’s imprisonment, the denial of bail and his subsequent hospitalization cannot be viewed in isolation from his life-long struggle to advance the cause of justice. The 79-year-old activist has been an indefatigable champion of the poor all his life. His oeuvre reflects his dedicated opposition to the systems, relations and social conditions that exploit the vulnerable. Rao has been steadfast in advocating radical changes in the established political and social order. His implication in the Elgaar Parishad case and incarceration have been alleged by many to be a calculated move to deny him the opportunity to raise his voice against injustice.

Poets and revolutionaries hold up the mirror to society in ways that others are often unable to. Rao’s patriotism is reflected in his unrelenting struggle against injustice. It is hoped that the government will release the people’s poet at the earliest as a gesture of goodwill. He should be with his family in this trying time and have his medical needs taken care of.

Sir — The plea by the wife and daughters of Varavara Rao to release the activist from prison was heartbreaking to hear. The Hyderabad-based revolutionary poet and other eminent rights activists have been languishing in jail for more than two years for their alleged involvement in the Bhima-Koregaon violence in 2018. Rao’s family earlier revealed that their last conversation with him indicated that his health conditions have deteriorated severely, showing signs of delirium and loss of memory. While their repeated appeal to the Maharashtra and Central governments to release Rao on bail has not borne fruit, he was shifted to a hospital after having tested positive for the novel coronavirus.

Recently, Romila Thapar, along with Prabhat Patnaik, Devaki Jain, Maja Daruwala and Satish Deshpande, had appealed to the Maharashtra government to place the 11 activists currently incarcerated in state prisons in connection to the Elgaar Parishad case under house arrest in light of the health risks posed by Covid-19. In June, 500 prominent personalities had penned an open letter requesting the immediate release of activists, including Rao, on bail on humanitarian grounds because of the countrywide spread of the pandemic.

In recent years, individuals disagreeing with the views of the Bharatiya Janata Party have been arrested on charges of sedition, steadily encroaching upon the people’s right to dissent in a democracy. Unless a nation ensures its citizens’ right to free speech and expression, it cannot call itself a democracy.

Sir — The report, Prison Statistics India, collated by the National Crime Records Bureau is a significant indicator of the condition of prison infrastructure in India. The executive summary of prison statistics in 2018 showed that the total number of national prisons decreased from 1,412 in 2016 to 1,339 in 2018 but the actual capacity increased from 3,80,876 to 3,96,223 with a comparative rise in the number of prisoners calculated at the end of the year. A significant number of these prisoners are undertrials — 3,23,537 out of 4,66,084 in 2018 — who languish in jail for years as a result of the slow pace of justice in our country. As per the report, 1,376 women were undertrial prisoners accompanied by 1,590 children. These figures are alarming.

In recent years, the number of people who have been detained in prisons has exponentially increased. Many students, academics, poets and journalists, among others, are facing serious charges because of their dissenting opinions. In view of the raging pandemic, many eminent individuals had urged the government to release political prisoners on humanitarian grounds. The fact that Varavara Rao contracted Covid-19 in prison further highlights the importance of releasing them at the earliest. We hope for Rao’s swift recovery. At this moment, speedy bail procedures can save innumerable lives.