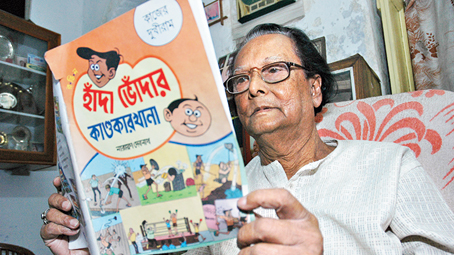 Sir — While there were no malls, multiplexes, cable television or smartphones in the 1970s-80s, children growing up in Bengali households at the time had unique cartoons in comic books as their companions. They had Batul the Great, Handa-Bhonda, Nonte-Phonte as well as characters illustrated in the detective stories penned by Swapan Kumar. These cartoons are still etched in the minds of their readers, as is their creator, Narayan Debnath. This year, Debnath has been named as a Padma Shri awardee. Although a belated move, the committee must be congratulated for officially recognizing this extraordinary cartoonist.

Sir — It is unfortunate that the farmers’ protests in Delhi went out of control (“Flames rising”, Jan 28). The incident that took place on Republic Day is a blot on this agitation, which had thus far largely been peaceful. Everyone must condemn violence. The clashes and the hoisting of a flag by protesters at the Red Fort will result in a number of people losing sympathy for the farmers.

That this happened on Republic Day is a shame as it is the day when India officially became a republic and the Constitution came into force. The Constitution has given us the right to protest but violence must be shunned. In most cases, agitators are emotionally charged; it is more likely for a large crowd to get carried away, often culminating in incidents of mob violence. Then, of course, starts the blame game.

But as keepers of law and order it is the duty of the authorities to make sure that such things do not happen. It is therefore also a failure on the part of the Delhi police and related agencies that the protest could not be managed. The Central government should conduct a thorough enquiry into this incident.

Sir — The violence that erupted during the tractor rally in New Delhi on Republic Day as part of the protest against the three farm laws is unfortunate and could have been avoided by undertaking better-planned strategies. Not only has a farmer lost his life in an accident but several police officials have also been injured.

On a positive note, one must acknowledge that the authorities upheld the constitutional right of the farmers to protest by granting them permission to proceed with their tractor rally even on an occasion like Republic Day. The police commissioner, S.N. Srivastava, must be commended for his efforts to keep the crowd in control without resorting to brutality, although there were some instances of baton-charge and use of tear gas.

I have been witness to several peaceful protests by farmers in the past. Strictly speaking, there was no need to use symbols of farming activities, such as tractors, at the rally, this could have avoided the accident. A long, peaceful walk down the permitted route would served the purpose better.

It is time for all the parties concerned — farmers and leaders alike — to get the situation under control. The farmers should once again approach the government with the core issue. This could stop further escalation of the conflict.

Sir — It was noble of the farmers to take moral responsibility for the mayhem during the Republic Day tractor rally. Now one must wait for the home minister to apprise the people of the reason why there was inadequate security even when the Centre was fully aware of the potential numerical strength of the agitators at the rally.

Sir — Violence must be condemned unequivocally. At the same time, it must be highlighted that the events that took place on Republic Day are being misrepresented by some on social media in order to incite hatred against the protesters and diminish public sympathy for the farmers. It is wrong to claim that the farmers replaced the Indian flag at the Red Fort. The flag that was raised was not Khalistani either. Yet such allegations are being spread like wildfire, to a large extent by the supporters of the ruling dispensation at the Centre.

The crisis that the farmers are facing with respect to the farm laws and the larger problem awaiting them if the laws are not repealed must not be forgotten because of a rally gone wrong. A thorough, impartial investigation must be undertaken so that the people know the exact details of the incident.

People must not confuse mutual clashes with one-sided violence. It is true that the conflict between the police and the protesters was unwarranted. But the size of the rally was no secret; the security planning should have been better.

Sir — The chaotic turn of events during the farmer’s rally is unfortunate. It should not have been allowed to happen. Violence in any form needs to be condemned. The farmers were given a designated path to hold the rally after the Republic Day ceremony was over. But the storming of the Red Fort and the unfurling of a religious flag was unwarranted. One person was reportedly killed in an accident related to a tractor.

The farmers have also lost the sympathy of a section of the people. Their demand for the repeal of the three contentious laws has also lost significance. A high-level probe should be ordered and the culprits should be brought to book. A march to Parliament on Budget Day was on the cards for farmers. But it has now been called off. In the future, care should be taken to avoid violence.

Sir — The eruption of violence at the tractor rally has certainly tarnished the image of the farmers’ protests. The blame for the incident lies with the leaders who mistakenly assumed that there would be self-discipline on the part of the protesters. But the incident also raises other questions. Why did the Delhi police allow the marchers to take a route other than the one decided upon? The videos being circulated show that there was little police presence at the Red Fort to stop protesters from hoisting their flag on its ramparts. The police is thus as much to blame as those who perpetrated the violence.

The culprits must be put behind bars at the earliest. Above all, those who incited the violence have done the farmers — who were already trying to steer clear of malicious government propaganda — great disservice.