Loud and clear: Pray for Myanmar 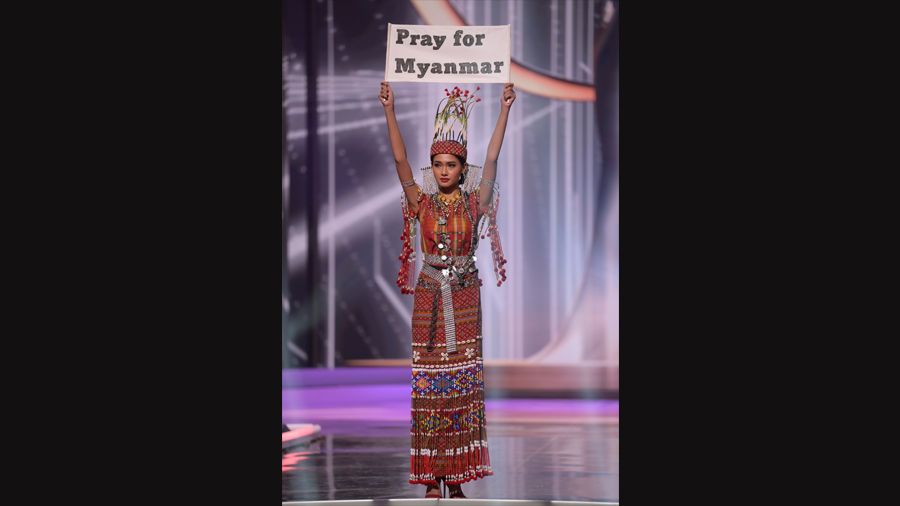 Sir — The fact that the Miss Universe contestant from Myanmar, Thuzar Wint Lwin, held up a sign saying “Pray for Myanmar” during the competition is encouraging. She denounced the violent suppression of protests against the military coup by the junta in her homeland. Competitions like Miss Universe enjoy high viewership globally, making them effective platforms to raise awareness about such crucial issues. Two other contestants also made socially relevant statements. One hopes their message inspires positive action on the ground.

Sir — In the article, “Lessons learnt” (May 13), Swapan Dasgupta does his best to twist the tale of the waning ‘subaltern Hindutva’ votes for the Bharatiya Janata Party as indicated by the recently published survey by the Lokniti-Centre for the Study of Developing Societies. The data clearly show that compared to 2019, the BJP has lost its share of Hindu votes among both the so-called upper and lower castes. It is evident from the article that the BJP think-tank has got a clear message from Bengal that its brand of Hindutva will not work here.

The BJP may now try to push through a Bengali Hindutva line, bringing icons like Chaitanya, Bankimchandra Chattopadhyay and Swami Vivekananda to the fore. That ideological challenge will be a litmus test for the Trinamul Congress. Working on people-oriented projects will not be enough to arrest this kind of propaganda, nor will it suffice to only think in terms of the binary of ‘Jai Shri Ram’ and ‘Joy Bangla’ slogans. The BJP seems ready with a blueprint to allure the 60 per cent of Hindu votes required by it to take over Bengal. It is important that those who are trying to prevent this also have a strategy of their own, the lack of which might give an extra edge to the saffron party in the future. The people of Bengal must be careful because, for the BJP, the battle might be over but not the war. Dasgupta’s article points to just that.

Sir — The article by Swapan Dasgupta omits several points. First, it must be noted that the BJP spread the false propaganda for months that it was to get more than 200 seats in Bengal when it did not even have enough grass-roots candidates. Second, Dasgupta fails to mention the role of women in the victory of the TMC. This is a fact highlighted by the Lokniti-CSDS survey. Third, the party’s blatant attempts at communal polarization in the countryside was responsible for its own failure. The survey points out that only 50 per cent of all Hindus and a small percentage of Muslims voted for the BJP.

Finally, Dasgupta does not take into account that allegations of the party’s reported misuse of Central agencies and constitutional bodies, such as the Election Commission, did not go down well with a majority of the electorate. Until the BJP learns from these factors — among many others — and vows to correct itself, it might as well bid goodbye to Bengal.

Sir — The lesson learnt from Swapan Dasgupta’s analysis is that the BJP jumped into the Bengal elections with only polarization and the anti-incumbency factor as strategies.

Sir — The captain of the Australian men’s cricket team, Tim Paine, has said that his team was distracted by India with ‘sideshows’ during the Border-Gavaskar Trophy that they lost 2-1. This is a bad excuse.

After the Indian team led by Virat Kohli suffered a humiliating loss in the first Test at Adelaide and the skipper returned to India, Paine became overconfident of a whitewash. However, the stand-in captain, Ajinkye Rahane, and his team had other ideas. In Melbourne, India levelled the series and in Sydney, the youngsters led India to an honourable draw. But there was some uncertainty about the final Test at Brisbane — India allegedly refused to play it because of restrictions imposed by the Australian government, but Cricket Australia later clarified the issue. India’s debutants scripted a historic win, breaking Australia’s unbeaten streak at Brisbane. Now, in order to keep his captaincy, Paine is coming up with all kinds of excuses.