Without care: Absence of govt data on migrants 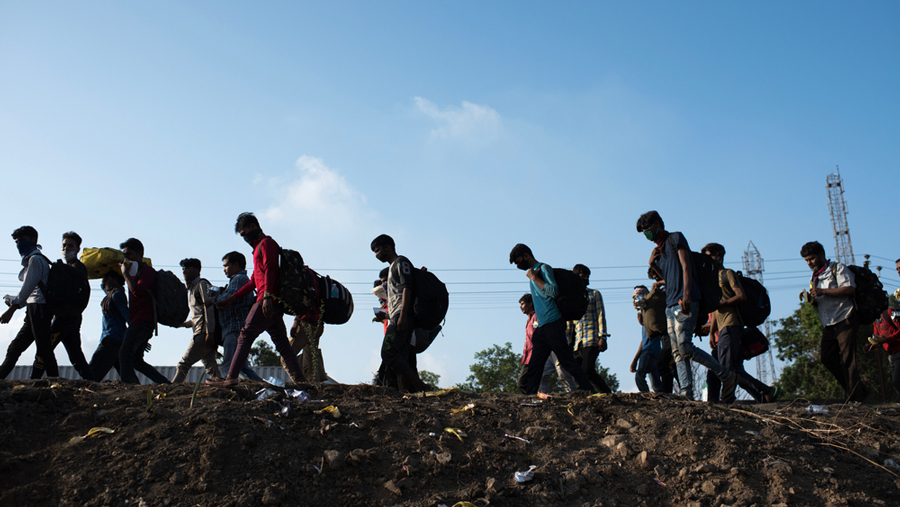 Sir — The vacuous response of the Union labour minister, Santosh Gangwar, to a written parliamentary question seeking details on the number of deaths of migrant workers and the compensation offered to them shows the government’s utter callousness and indifference to the plight of these workers (“Migrant deaths govt won’t see”, Sept 16). The minister replied that the government had no data on how many guest workers had died or were injured on the long trek back home during the lockdown. The minister also said that the government had no information on how many migrant labourers had lost their jobs on account of the Covid-19 crisis as no such survey had been conducted.

One wonders how an elected government can shrug off its responsibilities towards its people with such ease and trivialize their suffering, especially when it was its own rash decision to implement the lockdown at a short notice that inflicted such hardships on them. The agonizing images of the exodus of thousands of India’s guest workers — possibly the largest migration in the nation’s history since Partition — cannot be forgotten. Rendered jobless by the sudden lockdown, many labourers died of starvation, exhaustion, dehydration and other ailments as they walked homewards. Several of them were crushed to death on the way. The fact that the government never documented these deaths reveals its lack of empathy. The State must take measures to mitigate the sufferings of the migrant labourers and compensate them for their losses adequately.

Sir — The opening day of Parliament’s monsoon session made it evident why the Narendra Modi-led government was keen to avoid answering questions raised by members on the floor of the House. The government’s written response to a question about the number of migrant labourers dying on the way during the lockdown betrays its sheer callousness and insensitivity towards a great human tragedy. As the government has no data on the matter, no compensation was paid to the families of the deceased. The labour minister had a similar response to a question about the number of labourers who had lost their jobs on account of the pandemic.

In spite of displaying such unfeeling attitude towards its own people, the Centre could get away with it because the response was laid on the table of the House and the minister did not have to face follow-up questions afterwards.

Earlier, the attorney-general had tried to mislead the Supreme Court by saying that no migrant was walking on the road, when many news channels were featuring live programmes on how these labourers were collapsing on their way home, fighting exhaustion and hunger, besides withstanding police brutality. Both these instances point to a case of wilful ignorance. Is it because the government does not want to be held accountable for these deaths caused by its own criminal negligence or is it simply trying to avoid having to pay compensation?

Sir — It is unfortunate that the government does not have the details on the deaths of migrant workers who were forced to hit the roads to their faraway native places on account of the lockdown and the consequent loss of livelihood. The same government, however, earlier acknowledged that over one crore migrants had been shifted. This staggering count itself shows the pathetic condition of the workers in the informal sector, which employs nearly 90 per cent of the total workforce of India. These labourers work without being offered adequate social security. Now it is evident that even their deaths do not figure in official counts. The workforce of the informal sector deserves better treatment.

Sir — According to researchers, nearly 1,000 migrants lost their lives on their way back home after the lockdown commenced. How can one forget the 16 migrant workers who were run over by a train as they had fallen asleep on the railway tracks while walking home? Like them, several others succumbed to fatigue on their way back to their hometowns.

The difficulties suffered by the migrant workers are a shame on civilized society and a welfare nation. But it was well-anticipated that the Central government would turn a blind eye towards them. While pilgrims stranded elsewhere were taken care of, a number of migrant labourers were left neglected and untested. Is it any wonder then that many of them would turn out to be Covid-19 positive?

Sir — Even the smallest disturbance in the natural order can wreak great havoc. A recent study has shown that a sharp dip in the population of Aleutian sea otters has led to the crumbling of the entire marine ecosystem in Alaska. With the decrease in the number of sea otters, there has been a steep rise in the population of sea urchins, the population of which was kept in check by otters. This is, in turn, is threatening coral reefs in the region as sea urchins in search of food are unwittingly destroying them. Coral reefs play a major role in maintaining marine biodiversity. Swift action is needed to restore the ecological balance.