A ‘decisive majority’ in a referendum can’t be a subjective judgment: it has to be legally defined 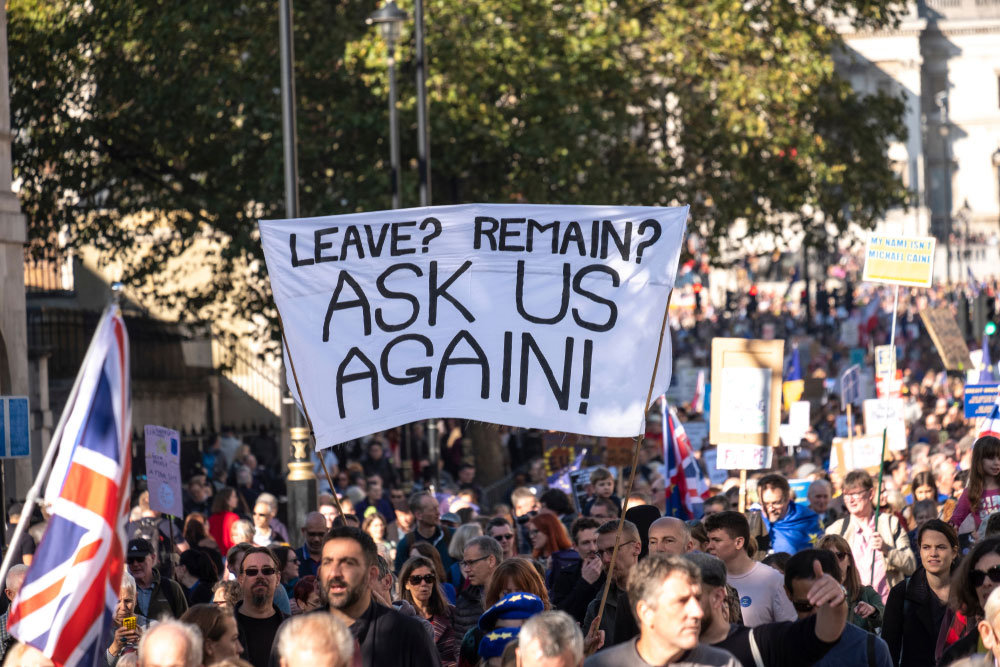 The designers of referendums should take their cue from constitutional democracies like India or the US because constitutional amendments in these countries (especially in the US) have to clear a very high bar before they are passed
(Shutterstock)
Mukul Kesavan   |   Published 27.01.19, 03:38 AM

European democracies roiled by referendums provide wonderful political theatre for outsiders, but they should be treated as cautionary tales.

Referendums subvert representative democracy. Referendums are seen as an occasional recourse to direct democracy as a way of settling epochal or existential issues, but they are just as likely to entrench division and delegitimize the political systems that use them. The perfect example of this is the way in which the Brexit vote has brought the House of Commons to a standstill. Theresa May’s withdrawal agreement suffered the largest legislative defeat in the history of Parliament and, yet, days later, a motion of no confidence tabled by the Opposition was defeated. Theresa May reminded MPs that the nation had voted to exit the European Union and Parliament had to find a way of obeying that instruction. At the end of her speech, she had the temerity to suggest that Parliament needed to implement Brexit to retain the confidence of the people.

The reason she could make that jibe was she was right. Once the Commons had voted for a referendum, it implicitly made the referendum’s result binding upon itself. The fact that there was a cross-party plurality in Parliament hostile to Brexit and no majority for any practical exit plan didn’t let MPs off the hook from which they now dangled: the stated will of the People. The ‘solution’ of a second referendum pushed by aggrieved Remainers was haunted by a simple question: why not a best-of-three, then? Or a best-of-five? If Parliament was going to poll the people till they voiced an opinion that a majority of MPs agreed with, what was the point of holding the referendum in the first place?

The first lesson of Brexit, then, is that Parliaments shouldn’t subcontract their authority to the People by holding a referendum because there is a real danger that they might never get it back. Unfortunately, in the real world, Parliaments feel the need to step outside the processes of legislation and constitutional amendment to have a ‘People’s Vote’ because there are issues like abortion, secession and membership of Europe that are too divisive to settle by parliamentary majorities. While this might be condemned as a kind of cowardice, the failure of legislators to muster up the courage of their parliamentary convictions, there have been so many referendums in stable parliamentary democracies that they are a reality that both parliamentarians and political thinkers have to reckon with.

The second lesson of Brexit (and other recent referendums like the one on independence for Scotland held in 2014) is that if you must have a referendum, it’s madness to design one that can be won or lost by a simple majority. If a referendum is meant to settle a vexed question once and for all, to pre-empt the absurdity of a second referendum on the same issue, it must have the moral force of an overwhelming majority. The folly of the simple majority rule is obvious from the two most recent referendums in Britain. In the case of the Scottish referendum, the ‘No’ majority against independence was just over 55 per cent. With Brexit, it was even closer, a 52-48 split. In both cases, the losing side began pressing for another vote almost immediately. The Scottish National Party’s leader, Nicola Sturgeon, has made it clear that she plans to ask for a vote whenever she thinks the political mood is right and British Remainers have used every argument available, from the venality of Leavers to their stupidity for being misled by lying Brexiteers, to campaign for a second ‘People’s Vote’.

These second thoughts would have been impossible if there had been a decisive majority in these referendums. A ‘decisive majority’ in a referendum can’t be a subjective judgment: it has to be legally defined. Here the designers of referendums should take their cue from constitutional democracies like India or the US because constitutional amendments in these countries (especially in the United States of America) have to clear a very high bar before they are passed. They require special majorities to pass, not just the simple majorities needed for routine legislation. In India, amendments under Article 368 of the Constitution need to be passed by a two-thirds majority of members present in both Houses of Parliament. In certain cases, the two-thirds majorities need to be further ratified by the legislatures of half or more of all of India’s states.

Any issue that a Parliament thinks is important enough to invoke the exceptional use of a referendum should be treated like a constitutional amendment. It should require a special majority to pass. Should such a proposal get the requisite special majority, it becomes impossible for the losing side to claim that the result was narrowly swung by the special circumstances of the moment. The winning side can reasonably claim that the matter has been settled for a generation, forestalling the chronic scratching at a sore that turns it into a festering wound.

This isn’t a hypothetical argument: a casual glance at the result of successful referendums — those that have actually brought closure to vexed questions — bears out the importance of large majorities. The 1975 referendum that formally confirmed the United Kingdom’s membership of the European Community (or Common Market) was won by a majority of 67.23 per cent of the votes cast. It settled the question of membership for more than forty years. If it hadn’t been for the too-clever-by-half opportunism of David Cameron, the UK’s membership would have remained a settled question because there wasn’t, in fact, a massive grass roots movement for a second referendum.

Similarly, the result of the Irish referendum on abortion last year was accepted as conclusive, even by its opponents, because of the size of the majority in favour of legalizing abortion: 66.4 per cent of the people who voted supported repealing the ban on abortion, exactly two-thirds of the turn-out. There’s nothing sacred about a two-thirds majority but constitutional precedent and the historical aftermaths of referendums seem to suggest that a majority of that size commands political legitimacy that smaller majorities do not.

It’s worth pointing out here that the Catalan referendum on independence, held in 2017, is not an exception to this informal rule, even though in answer to the referendum question ‘Do you want Catalonia to become an independent state in the form of a republic?’ 92 per cent of the people voting answered ‘Yes’. It isn’t an exception for two reasons. First, unlike the Scottish referendum, it wasn’t sanctioned by the national legislature and was, in fact, declared illegal by the country’s constitutional court. Secondly, less than 43 per cent of Catalonia’s electorate turned out to vote because ‘No’ voters boycotted the referendum.

The Indian Constitution is silent on the question of referendums. The closest India has come to a referendum was the vote or ‘opinion poll’ in Goa in 1967 to ask Goans to choose between merging with Maharashtra or staying a Union territory. There was a referendum held in Sikkim in 1975 on abolishing its monarchy after Indian forces entered the protectorate in 1974 that was carried by a majority that would have done a caudillo proud: 97.55 per cent. And then there is the plebiscite in Kashmir mandated by a United Nations vote that never happened. Everything in the global history of referendums suggests that referendums are generally a bad idea and the only referendums that work are those that are won by huge majorities. In the case of India, given its diversity and the threat of brute majorities trampling on that diversity, referendums should be approached even more gingerly. For example, should some misguided or malevolent government decide to elevate Hindi to the status of India’s sole official language, via a referendum, Parliament should insist on a special majority of 75 per cent for the proposal to be carried. Or, better still, it should just say No.