There is concern that new regulations in the archipelago are part of an engulfing bio-politics, which can invariably incarcerate citizens as has happened elsewhere 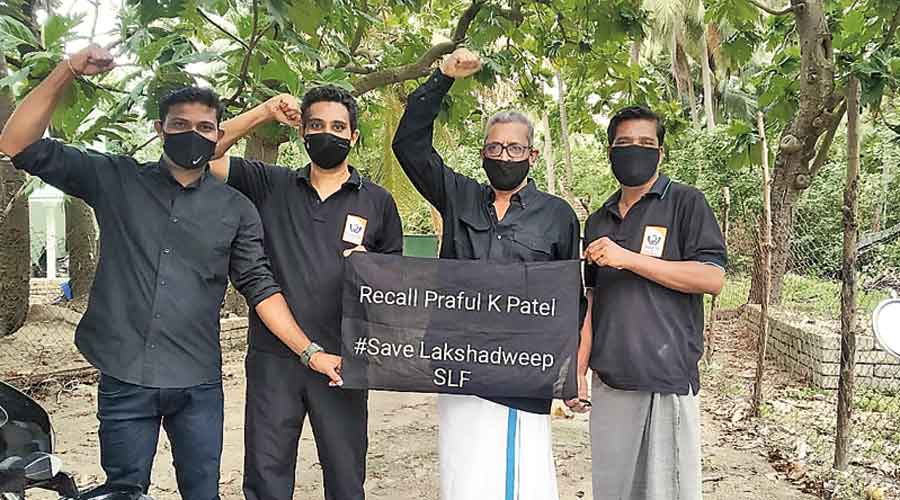 The ongoing protests in Lakshadweep and outside against a series of new draft bills and regulations have started attracting international attention. The islanders believe that the draft bills that the new administrator, Praful Khoda Patel, introduced are part of a larger bio-politics, enmeshed in the cultural politics of the Bharatiya Janata Party, and it would damage the basic behavioural, dietary and occupational practices of the people there. They have not bought into the spurious reasons that the current island administration has placed before them in the name of ‘development’, ‘tourism’ and ‘safety.’ Among the many bills that Patel has proposed since January, the Lakshadweep Prevention of Anti-Social Activities Regulation, 2021 and the Lakshadweep Animal Preservation Regulation, 2021 merit a closer look.

There is concern that the rationale of the Lakshadweep Animal Preservation Regulation, 2021 is to place the islanders under surveillance to augment the ideological tenets of Hindutva. The content and the prescribed punishment for the violations of the clauses in the bill are being perceived as a calculated move to incapacitate the dietary traditions and choices of the people. A number of penal clauses not only impose a blanket ban on the consumption of the meat of cows, bulls, and bullocks (Section 5 & Schedule 1) but they also make the consumption of buffalo and goat meat nearly impossible. As per the clauses in Section 5:3, the “competent authority” has unquestionable discretion to decide if male buffaloes and goats are to be allowed for slaughter for meat. None of these animals will be certified in favour of consumption if the “competent authority” believes that they are “likely to become useful for the purpose of draught or any kind of agricultural operations,” or “useful or likely to become useful for the purpose of breeding”, or “useful or likely to become useful for the purpose of giving milk or bearing offspring” (Section 5:3). Additionally, the authority will be given a free hand to enter any house or institution if it thinks that “an offence under this Regulation has been or is likely to be committed” (Section-9: 1& 2). Mutton and vegetable-based protein-rich foods remain highly expensive; the proposed elimination of affordable red meat would definitely aggravate the grim health situation in the region.

The Lakshadweep Prevention of Anti-Social Activities Regulation, 2021 kindles similar anxieties on account of its intent and possible consequences. Lakshadweep has one of the lowest crime rates in India. The bill, therefore, fails to offer a rationale for its inception and its hurried execution. The clauses in the bill identify multiple categories of offenders, including ‘bootlegger’, ‘cruel person’, ‘cyber offender’, ‘dangerous person’, and ‘depredator of environment’ (Section 2). The expandability and the opaqueness of the clauses can put 70,000 people at the mercy of the ‘competent authority’. Section 3:4 of the bill gives the authorities the power to not only detain a person for the slightest aberration but also in anticipation of “making preparation for engaging in activities”, the definition of which comes with sufficient ambiguity. However, it is Section 6 of the proposed bill that is truly revealing. It clearly says that the detention orders issued under Section 3 on the basis of two or more grounds mentioned in Section 2 of the same bill “shall not be deemed to be invalid or inoperative merely because one or more of the grounds is or are vague, non-existent, not-relevant, not connected or not proximately connected with such person, or invalid for any other reason whatsoever.” This clause, along with others in the text, gives the competent authority the right to detain any person in the island without stating the reasons very clearly. In the current form, the bills empower the administration to detain any citizen for a year in the absence of solid evidence.
There is concern that these regulations are part of an engulfing bio-politics, which can invariably incarcerate citizens as has happened elsewhere in India. This could well be the signal of a transition of Lakshadweep from an undisturbed tribal conglomeration characterized by mutual trust and intimacy into a penal archipelago where people are left with limited mobility, voices and choices.