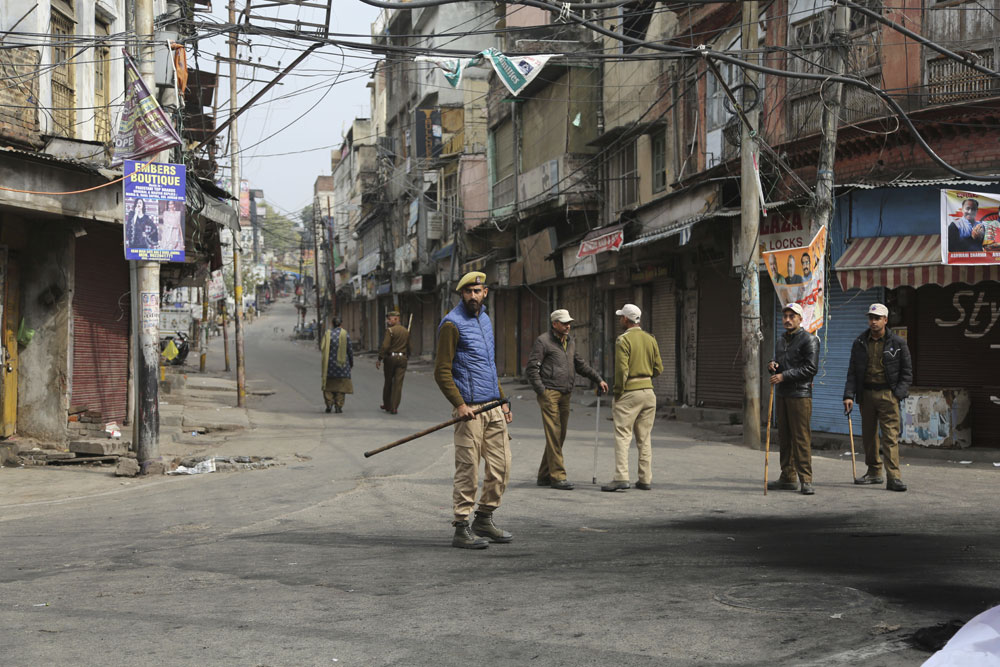 Policemen patrol during the third day of curfew in Jammu after the Pulwama attack on Sunday. Pulwama didn’t erupt in a vacuum. Behind the carnage lies centuries of tortuous history, invasions, intrigue, conquests, defeats and betrayals.
AP
Sunanda K. Datta-Ray   |   Published 23.02.19, 03:31 AM

The two most sensible comments amidst the hysteria that succeeded the Pulwama massacre were both by former Kashmir chief ministers. Omar Abdullah’s anguished plea that “Kashmir isn’t just a piece of land, it’s the people that inhabit it” prompted ultra-nationalists to accuse him of speaking like Imran Khan, Pakistan’s prime minister. No doubt Mehbooba Mufti’s sage warning that “[t]he two countries cannot afford war” will draw worse vitriol from the “illiterate people and fools” who, she says, are the only ones to “talk about wars in this era”.

With national leaders pleading — or getting hacks and henchmen to plead for them — public pressure to justify military adventurism, so much else sounds like a real-life enactment of Arthur Miller’s allegory for McCarthyism in The Crucible. The crisis highlights two factors that are crucial to India’s welfare and subcontinental stability. First, as Arthur Moore, an internationally renowned journalist who was editor of The Statesman for nine years (1933 to 1942) warned many decades ago, “... there will never be satisfactory relations between India and Pakistan till the Kashmir issue is amicably settled.” Tension would remain even if all other problems of the time — “canal disputes, boundary disputes, displaced persons disputes” — were resolved and bilateral trade flourished. Second, as Abdullah pleads, the people — not territory — of Kashmir merit priority consideration. They will only be further alienated if Kashmir is treated as a law and order problem instead of a suffering region crying out for an active and imaginative policy of reconciliation.

No such policy can be forged unless the government decides who must bear the blame for the February 14 carnage. If it can be proved that the Jaish-e-Mohammad was responsible and the authorities are convinced that the organization “is the brainchild of the Pakistan army and it is the Pakistan army and ISI that controls Jaish-e-Mohammed”, quoting Lieutenant General K.J.S. Dhillon, then the bombing was an act of war, no less. New Delhi would then be within its rights to take all the steps — démarche, demand for atonement, severance of ties, secure guarantees for the future, surgical strikes — that amount to war by other means against a hostile foreign power. But, then, the name and identity of the young suicide bomber and the claim that the key handler in Jammu and Kashmir was eliminated within 100 hours of the attack point to local mischief. Unlike Israel bombing Iraq’s Osirak reactor or the Americans attacking al Qaida targets in Afghanistan, it becomes an internal problem. Can a country go to war against itself, especially when, in another context, the adversary might have been hailed as a freedom-fighter?

The domestic angle is further confirmed by the withdrawal of security cover from all Kashmiri politicians suspected of secessionist views. That deliberate invitation to mayhem is compounded by the Meghalaya governor’s recommendation of an economic boycott of Kashmir and Kashmiris as a “non-violent way of reacting to what has been going on for the last two-three decades”. Significantly, Tathagata Roy did not single out only those Kashmiris who are demonstrably disloyal to the Indian State. His harsh prescription applies to all Kashmiris and their homeland. If so, it would be logical to ask why the privilege of Indian citizenship should be bestowed at all on a people whom the current Indian establishment, as represented by a ruling party stalwart, finds so unexceptionally objectionable. If Roy is bent on teaching Kashmiris a lesson, his reckoning cannot restrict itself to “the last two-three decades”. That is politics, not history.

Pulwama didn’t erupt in a vacuum. Behind the carnage lies centuries of tortuous history, invasions, intrigue, conquests, defeats, betrayals and persecution in a “desiccated land”, the etymological origin of “Kashmir”. True, Gulab Singh “added to the geographical boundaries of India an area such as no ruler in the past had ever done”, as K.M. Panikkar gushed, but he also laid the seeds of the present troubles by paying the British 75 lakh Sikh rupees and an annual tribute of “twelve pashmina goats and three pairs of shawls” for “all the hilly or mountainous country with its dependencies situated to the eastward of the River Indus and the westward of the River Ravi” that had belonged to the defeated Sikh empire. That was in 1846. Ahmed Shah Abdali, the Afghan warrior-king, had wrested Kashmir from the tottering Mughals in 1752, and his successors lost it in turn to Ranjit Singh whose seizure of the valley in 1819 ended more than four centuries of Muslim rule. Ranjit Singh had made Gulab Singh’s father ruler of Jammu. In addition to inheriting that title, Gulab Singh conquered Ladakh and Baltistan and claimed to rule all or some of the Aksai Chin plateau.

It seems never to have been forgotten or forgiven that Kashmiris had no say in the real estate transaction that made Gulab Singh Maharaja of Kashmir. Young men in Srinagar who have nothing to do with explosives need little urging even now to regale visitors with tales of the repressive Dogra regime that anticipated today’s sangh parivar excesses elsewhere. “We had to walk like this,” a local reporter told me, hunching his shoulders and bending his head till his chin rested on his chest. He was too young to have experienced and remembered the humiliations of those years but, obviously, it’s an undying memory among Kashmir’s Muslims. Anticipating today’s ghar wapsi, Gulab Singh reportedly considered compulsory mass conversion of Muslims but the pundits of Varanasi felt it would dilute Hindu purity. The death sentence that was the original punishment for killing a cow was changed to life imprisonment, then to 10 years in jail and, later, to seven under British pressure.

Kashmiri pundits, the most recent victims of Kashmir’s tectonic shifts, enjoyed a monopoly of jobs under Rajputs who were the ruler’s kin once the “State for State’s People” agitation succeeded in getting rid of Punjabis. As in British India, Kashmir, too, had a popular movement but it wasn’t to overthrow colonialism; it was for Muslim emancipation. Prem Nath Bazaz, author of the slogan “Kashmir belongs to Kashmiris” and one of the few pundits to join the movement for change, vividly described the appalling conditions of ragged and barefoot landless labourers working as serfs for absentee landlords. According to another sympathetic Hindu, Gawasha Nath Kaul, author of Kashmir Then and Now, 90 per cent of Muslim households were mortgaged to Hindu moneylenders. The famine of 1877-79 took cruel toll of the Muslim population although not a single pundit died of starvation. Kashmir’s prime minister then, another pundit called Wazir Punnu, whose name “was a byeword and a reproach among the people” according to the British Resident, is said to have declared there “was no real distress and that he wished that no Musulman might be left alive from Srinagar to Rambhan (in Jammu)”.

Given this past, Henry Grady, the first American ambassador to India, was right to look beyond legalities and warn in January 1948, “Kashmir is one of the great problems that may cause the downfall of India and Pakistan.” Basking in constant boasts of global glory, Indians find it impossible to believe that hubris can ever threaten this country. The post-Pulwama frenzy seems more outrage at the wound to India’s pride than mourning for the murdered jawans. It’s the duty of responsible rulers to temper such explosive passion instead of further inflaming it with crude rhetoric. Moore’s abortive federal plan which Jawaharlal Nehru took up was intended to spare South Asia further conflict. Kashmir, for him, was “the great test for Nehru’s statesmanship”. Today, it is the greatest challenge for Narendra Modi’s realism. He must succeed with a much-needed policy for Kashmir if only to demonstrate that Nehru failed.