Once the homily ‘war is no solution’ dominated the airwaves; today the desire is to end the ‘Pakistan problem’ altogether 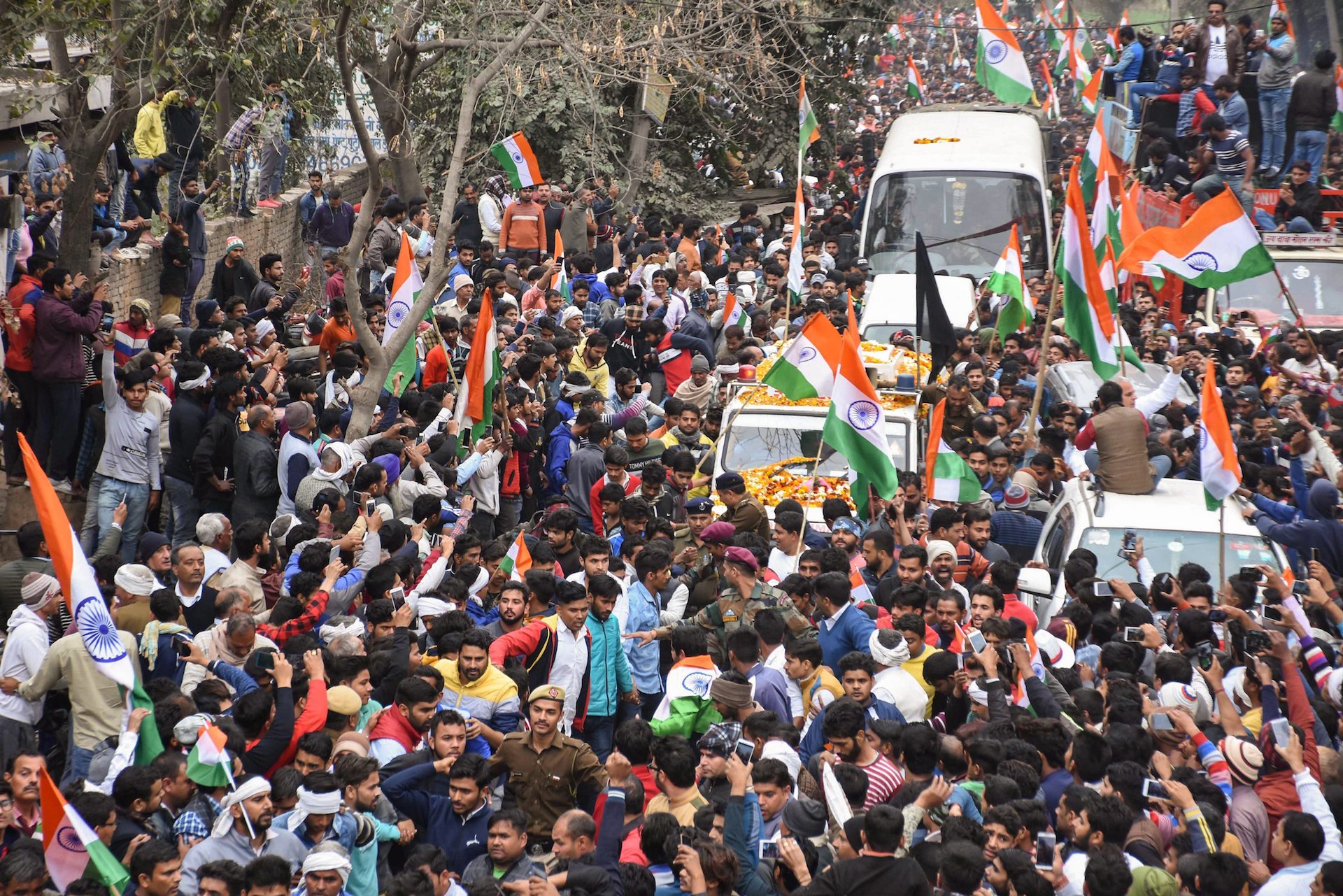 People gather in Faridabad on Wednesday, February 20, to pay their last tributes to army jawan Naik Sandeep Kaliraman, who died after succumbing to injuries sustained during the encounter with militants following the Pulwama terror attack
PTI Photo
Swapan Dasgupta   |   Published 21.02.19, 03:53 AM

It is possible, but probably unlikely, that the timing of the lethal suicide bombing in Pulwama on February 14 was carefully pre-determined. The Pakistan-based Jaish-e-Mohammad, which has a record of carrying out spectacular acts of terrorism — they include the attack on the Indian Parliament on December 13, 2001 — had obviously planned something big this year, some say to avenge the death of Maulana Masood Azhar’s nephew by the Indian security forces. However, the exact timing and the nature of the attack were probably guided by purely opportunistic considerations, a reason why the general intelligence alert never translated into a specific warning.

To the extent the JeM action has resulted the Central Reserve Police Force stationed in the Kashmir Valley suffering heavy casualties, its Pakistani handlers have reasons to gloat. In an asymmetric war, this act by a fanatical suicide bomber has had maximum impact and its effects can be felt all over India. Since the Pulwama bombing coincided with a similar attack on Iranian soldiers in its Sistan-Baluchestan province, for which the authorities in Tehran also blame Pakistan, its reverberations may also acquire a larger dimension. Initial reactions in the international community definitely suggest a much greater unwillingness to digest horrific acts of terrorism with platitudes of peace and restraint.

Predictably, every major terrorist strike is accompanied by a trickle of conspiracy theories. The 9/11 attacks on the World Trade Center buildings in New York and the Pentagon in Washington DC were followed by bizarre and completely unfounded tales of a Jewish conspiracy, a ridiculous story that has its believers all over the world. The first day of the 26/11 attacks in Mumbai that led to the deaths of nearly 170 civilians also produced the theory — again entirely unfounded — that it was the handiwork of ‘Hindu terror’ groups.

After the initial shock, the timing of the Pulwama bombing has triggered some motivated speculations that go well beyond the familiar taunts of Prime Minister Narendra Modi for the government’s inability to prevent the outrage. In a Twitter posting that is indicative and carefully worded so as to not appear supportive of either the terrorists or Pakistan, a prominent member of the hate-Modi ecosystem in Lutyens’s Delhi referred to two facts and a question: “Fact 1: Pakistan Army and the ISI were behind the car-bomb attack. Fact 2: Cross-border military retaliation by Modi cud win him an election that was otherwise doubtful. Question: Is the ISI working to get Modi re-elected?”

Before the question is even considered, it is instructive to explore a series of coincidences. The organized and audacious incursions into Kargil in 1999 were probably planned by the Pakistan military soon after Atal Bihari Vajpayee’s bus ride to Lahore and his embrace of Nawaz Sharif. However, it was executed after the Vajpayee government was defeated by one vote in the Lok Sabha and elections were announced. India, at the time of the Kargil war, had a caretaker government. Likewise, the Mumbai attacks in 2008 happened barely days before important assembly elections.

In both the 1999 general election and the 2008 assembly election, the electorate was inclined to be supportive of the incumbent. In 1999, the Congress mounted very fierce attacks — during the conflict — on the Vajpayee government and suggested that India had let its guard down on the strength of its illusory belief in India-Pakistan friendship. The electorate didn’t agree and the Congress lost heavily. In 2008, a shrill and somewhat xenophobic campaign mounted by the Bharatiya Janata Party against the government backfired in Delhi and Rajasthan. At a moment of national crisis, voters seemed inclined to be supportive of the incumbent government.

Going by this logic, any dastardly act of terrorism that causes grief and pain leads to people rallying behind the government as an act of national solidarity. Certainly wiser after its experience in 1999, the Congress has refrained from attacking Modi in the belief that voters don’t take too kindly to any display of disunity in the face of a national threat. Of course, this hasn’t stopped the likes of the chief minister of West Bengal, Mamata Banerjee, from attaching a communal dimension to the emotional response of the entire country to unending Pakistani provocation. She has charged the BJP and the Rashtriya Swayamsevak Sangh of not answering charges of ‘intelligence failure’ and, instead, pointing fingers at Muslims. Nor has it stopped a section of India’s left-liberal intelligentsia, always uneasy with strong assertions of nationalism, from trying to turn the spotlight on the alleged harassment of Muslim students from Kashmir in the aftermath of the Pulwama bombing.

Contrarian voices are never popular when the nation comes together in celebration, grief and anger, and the mood today is no different. Yet something is different. Unlike the past, when a terrorist outrage was inevitably followed by candlelight peace marches and multi-faith prayer meetings, the cremations of CRPF jawans in different parts of the country have been uninhibited assertions of raw nationalism, with even men in uniform joining in the Bharat Mata ki Jai and Vande Mataram chants. In the past, the homily, ‘war is no solution’, dominated the airwaves; today, the clamour is for more ‘surgical strikes’ that will not only knock out terrorist camps but, hopefully, end the ‘Pakistan problem’ altogether. Bollywood has chosen to end all relationships with Pakistani artists, the Cricket Club of India has chosen to cover a photograph of Imran Khan in his earlier avatar as an accomplished cricketer, Navjot Singh Sidhu’s self-appointed role as an emissary of subcontinental peace has seen him lose a lucrative TV contract and liberal poseurs have been suspended from their jobs for awkward or even tasteless social media posts.

It is difficult to ascertain whether or not this belligerence will be short-lived or will endure till voting day. To my mind, that is a secondary issue. What matters significantly is that there is intense public pressure on Prime Minister Modi to live up to his ‘surgical strike’ reputation that he has acquired post-Uri — or, more particularly, after the film, Uri. In short, the reality of an impending election and public expectations have more or less ruled out a calibrated response to Pulwama. The people have geared themselves to a robust and military response to Pakistan and a show of zero tolerance of all separatists in Kashmir. The withdrawal of security cover for separatist leaders in the Kashmir Valley was, for example, a momentous and even a risky option to exercise. But the government had to concede to the immorality of protecting the lives of those who routinely play footsie with Pakistan.

The ferocity of the public response may have been anticipated by those in Pakistan’s Establishment. However, I suspect otherwise. In October 2016, the Committee of the Whole of the Pakistan Senate published its policy recommendations on India-Pakistan relations. Apart from promoting Kashmir’s “self-determination” and highlighting “human rights violations”, it stated: “India’s own fault-lines in their alienated Muslims, Sikhs, Christians and Dalits as well as the growing Maoist insurgency be highlighted... Modi and his RSS ideology of Hindutva should be targeted.” More to the point, this official report recommended “Comprehensive outreach to those segments of Indian public opinion which are opposed to Modi’s extremism and his anti-Pakistan policies including political parties, media, civil society organisations and human rights groups.”

The ISI has its own priorities and often works quite autonomously from the rest of the Pakistani Establishment. The jihadi groups, too, have both links and their autonomy.

If we assume that the JeM’s actions had the blessings of the Pakistani State, it would follow that the use of terror as a way of damaging Modi politically was a significant consideration.