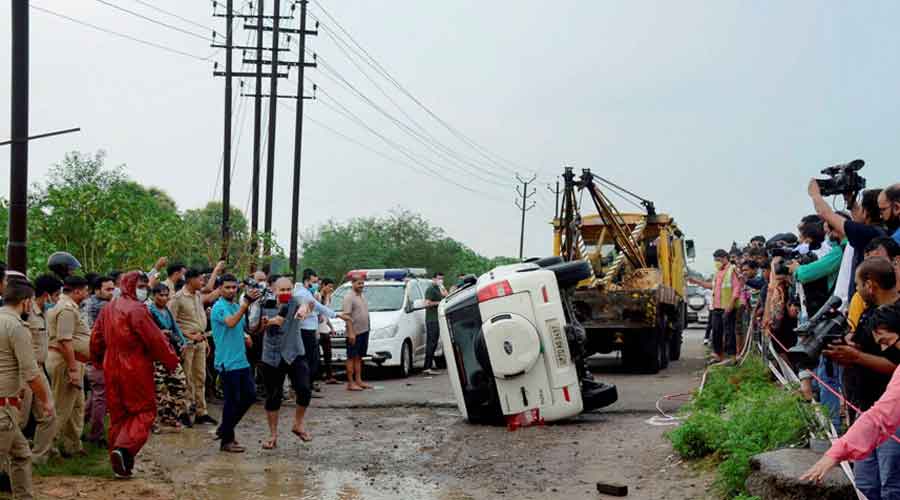 Gullibility is not one of the seven deadly sins, or the Indian people might have been condemned for it. For it is not just Vikas Dubey, responsible for the murders of eight policemen, who was killed in an ‘encounter’ when he allegedly tried to escape while being transported by the police from Ujjain to Kanpur, but also five of his co-accused, who were killed in less publicized ‘encounters’ in the six days that Dubey remained elusive. The events from the arrest — was it surrender? — to the death — which car turned over? — of a criminal accused of numerous murders long before the police killings yet running free with barely concealed political backing are enveloped in a fog of clashing claims. It is remarkable that police officers, not just politicians, are unworried that their statements may sound incredible or contradictory, or their acts may be revealing — the media were stopped from following the police entourage just before the accident that made the encounter possible — because the Uttar Pradesh government seems convinced of the Indian people’s gullibility. Any old fairytale will do, even an oft-repeated one.

There may be another reason. Murders by the police ingenuously called ‘encounter’ deaths have been turned into policy by the UP chief minister. In February 2018, government records show that the police were conducting four encounters daily, targeting those they, or the state, decided were guilty of something. That is a crime. Completely bypassing the law, the Constitution and judicial processes in the name of establishing order has created a culture where the police have probably forgotten all procedures except killing. A day before Dubey’s death, a petition in the Supreme Court asked that his security be ensured during arrest, citing the encounter deaths of his five followers. The Supreme Court’s earlier directions in case of encounter deaths are irrelevant in UP. If Dubey’s reported closeness to people in power led to his death before being brought to court, that is a manifestation of the politician-criminal link and the criminal-turned-politician phenomenon that the courts and the Election Commission have been fighting against. But as frightening is the fact that in UP no one objects to encounter killings; fear and violence have poisoned people’s perception. There is nothing innocent or foolish about this pretence of gullibility.