Advertisement
Home / India / Encounters: one after the other

Encounters: one after the other 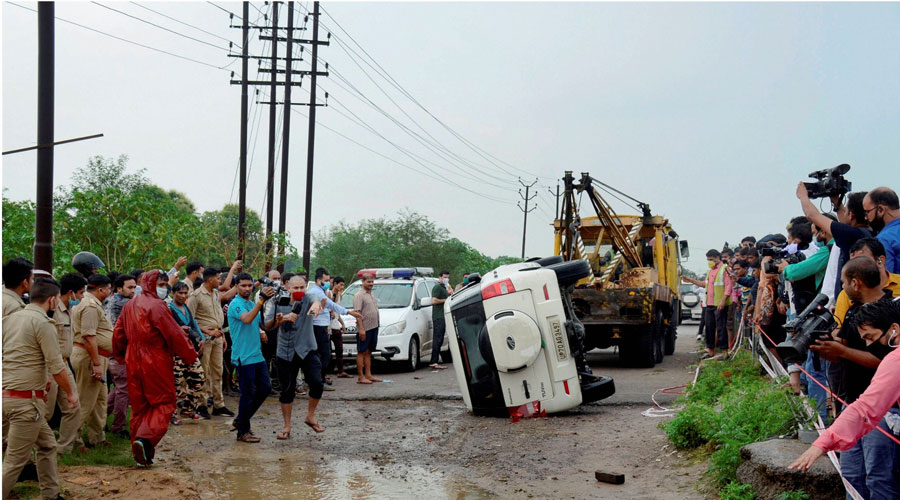 Manner of death: The Uttar Pradesh STF shot him on a roadside outside Kanpur city at 6.30am.

Police version: Vikas, accused of masterminding the July 3 massacre of eight policemen in his home village of Bikru, Kanpur Rural, had snatched a cop’s gun after the police vehicle ferrying him met with an accident. He was injured in retaliatory firing and died in hospital. There was a reward of Rs 5 lakh for information on Vikas.

Role in gang: The Bikru resident was allegedly involved in the murders and extortions committed by Vikas for the past 10 years. Kanpur Range IGP Mohit Agrawal said Bauwa’s house was beside Vikas’s. He said Bauwa had fired on the police from his own terrace on July 3, and had tried to chop off DSP Devendra Mishra’s leg after the officer had been dragged out of a house and shot dead.

Manner of death: Killed in police “encounter” in Etawah at 4am.

Police version: Ramesh Singh, Bakewar OC in Etawah, said the police had learnt at 3.30am on Thursday that four people in a Scorpio had carjacked a Swift from Ganesh Sah, a man from Jharkhand, on a highway near Bakewar.

He said Bauwa drove the Swift and the three others the Scorpio towards Etawah city, allegedly intending to drive on to Ujjain to help Vikas. They allegedly fired when the police chased them. Bauwa was killed while the other three fled in the Scorpio.

Role in gang: The Bikru resident was Vikas’s bodyguard. He had allegedly fired on the police from Vikas’s terrace on July 3.

Manner of death: Shot by police in Kanpur at 6am.

Police version: A police team had arrested him from a guesthouse in Faridabad, Haryana, and was taking him to Kanpur but the jeep burst a tyre near the Bhauti bypass, Kanpur. While the tyre was being replaced, Prabhat snatched a policeman’s revolver and fired. The police fired back, injuring Prabhat, who was declared dead on arrival at a nearby community health centre, J.N. Singh, additional DGP, Kanpur Zone, said.

Role in gang: One of Vikas’s henchmen. Had allegedly fired on the police from Vikas’s terrace on July 3.

Manner of death: Shot by the STF at Majhgawan village in Hamirpur district near his own home.

Police version: Hamirpur SP Shlok Kumar said Amar was shot during a gunfight in which a sub-inspector and a constable were injured.

Role in gang: The police said he was a distant relative of Vikas and was involved in every crime. Pandey’s wife Sushma said her husband never got involved in Vikas’s “business”; instead, he worked at a watch-manufacturing factory in Kanpur for a living.

ADG (law and order) Prashant Kumar said Pandey had fired on the police from Vikas’s terrace on July 3, and later snatched rifles from wounded policemen. DSP Mishra was allegedly killed on Pandey’s premises.

Manner of death: Killed in an “encounter”.

Police version: Police say he had hid in the forests near Bikru after the massacre but was spotted during a police search on July 3 morning. He fired, injuring three policemen, and was killed in retaliatory firing.

Role in gang: Police said Atul, a Bikru resident, was a cousin and a henchman of Vikas and had fired on the police on July 3. Atul’s family denied he was a gang member, saying the cousins were estranged because of family disputes.

Manner of death: Killed in an “encounter”.

Police version: Atul hid in the forest with Pandey. Like Pandey, he fired on the search team and died in retaliatory fire.