Advertisement
Home / Opinion / It’s Trump’s country. Get over it.

It’s Trump’s country. Get over it.

He’s giving anyone in America who isn’t aboard the Trump train the middle finger. It, not his brain, is the body part with which he governs 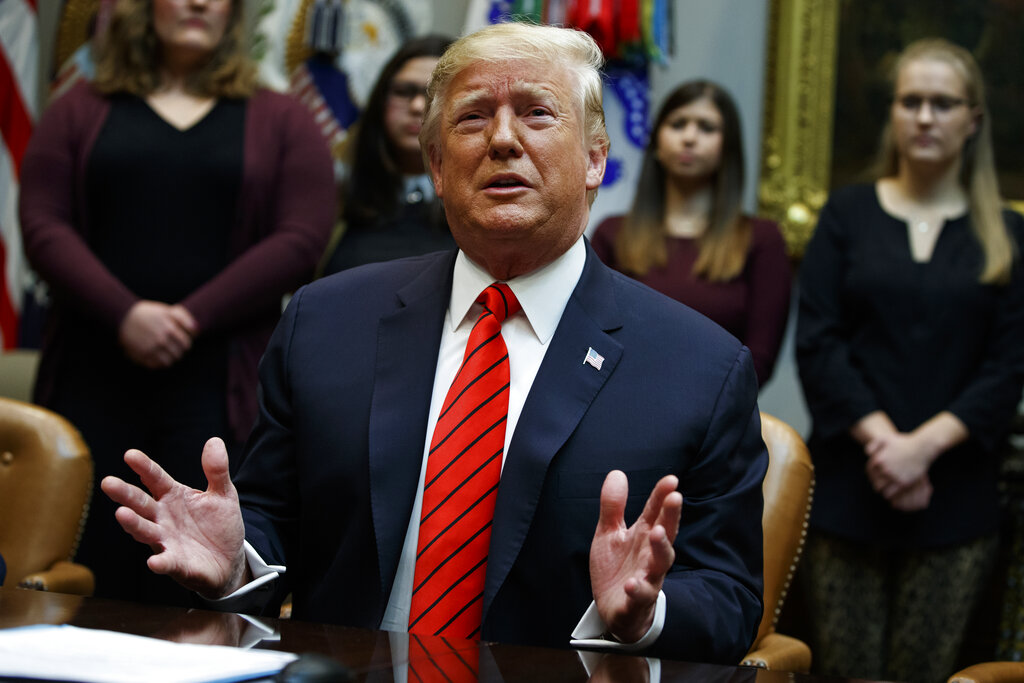 US President Donald Trump speaks during an event at the White House on Friday, October 18, 2019, in Washington DC. His presidency was scary from the very start, when he summoned “American carnage”. But the past several days have been something else: a clarifying, terrifying descent.
AP Photo
Frank Bruni / New York Times News Service   |     |   Published 21.10.19, 12:34 PM

The wonder of the Trump administration — the jaw-dropping, brain-exploding phantasmagoria of it — is that it doesn’t bury its rottenness under layers of counterfeit virtue or use a honeyed voice to mask the vinegar inside. The rottenness is out in the open. The sourness is right there on the surface for all to see.

It’s at the president’s rallies, where he plays a bigot for laughs, a bully for applause.

It’s in the ballrooms and beds at Mar-a-Loco, where he mingles official government business with free marketing for his gilded club.

It’s in the transcript of his phone call with the president of Ukraine, for whom the quid, the pro and the Biden-ravaging quo couldn’t have been clearer.

It’s at the microphone in the White House briefing room, where his acting chief of staff, Mick Mulvaney, showed up on Thursday, announced that President Donald Trump would host the next G-7 meeting at one of his own golf resorts, and conceded that, yes, aid to Ukraine had been tied to that country’s indulgence of the president’s political obsessions.

“Get over it,” Mulvaney told the assembled journalists.

“Elections have consequences,” he also said.

Allow me to translate: U.S. voters gave Trump the presidency, so it’s his to use and abuse as he wants. If you’re looking for an apology, you might as well be looking for the yeti. What you should really be doing is looking the other way.

Mere hours later, Mulvaney changed his tune, whining that the media had “decided to misconstrue” his words as some kind of confession. Um, no.

Our hearing was just fine, our construing was just right and our sole arguable failure was that we didn’t instantly grasp and immediately communicate the overarching import of his remarks: He was telling us that in the minds of the president and his unscrupulous minions, he from now on possessed and planned to revel in carte blanche. And the White House has a new public relations strategy, much evolved since the days of Robert Mueller.

Those revelations of rottenness that I mentioned before? They’re no longer an inadvertent tic. They’re an advertent tactic. Done with denials of wrongdoing, administration officials are reframing it as right-doing — as a president’s prerogative, even his entitlement, preemptively authorized by voters themselves.

Get over it, media. Get over it, America. This is Trump’s country. You’re just squatting in it.

Trump’s presidency was scary from the very start, when he summoned “American carnage” and hallucinated inauguration throngs. But the past several days have been something else: a clarifying, terrifying descent.

How low will Trump go? Leagues lower than you ever imagined, and probably several hundred feet below your current nightmares. Officials with Trump’s reelection campaign apparently plan to use “get over it” as a slogan on merchandise, but I think that the White House’s real new motto comes from Tacitus, a celebrated historian in ancient Rome: “Crime, once exposed, has no refuge but in audacity.”

That audacity animated Mulvaney. It was manifest when Trump publicly beseeched China to get in on the action and do its own investigation of Hunter and Joe Biden. It helps explain the planned convening of the G-7 at Trump National Doral Miami, a gesture of such perverse defiance, such profound contempt, that it takes the breath away.

With the gaslighting logic that is his greatest gift, Trump is asserting that no real crook would be this nakedly, flamboyantly criminal, and he’s giving anyone in America who isn’t aboard the Trump train the middle finger. It, not his brain, is the body part with which he governs.

This is all about impeachment, to which he has responded — predictably — with a puerile rage. The first, second and third laws of Trumpian psychology are that for every action, there’s an unequal and hysterical overreaction, and ever since impeachment took on an air of probability, he has been overreacting all over the place.

He’s at his most dangerous when he’s most vulnerable and impotent, because he’s compelled to project command and potency. He has to convince everyone that he’s unflustered and unafraid.

That, as much as any promise to voters, motivated the disastrous pullout from Syria and abandonment of Kurdish allies. Precisely because it was what might undermine the loyalty of his Republican saviors and leave him exposed, he did it. It was a pantomime of fearlessness, a pretense of invincibility.

Ditto the Doral decision, which Mulvaney, saying goodbye to any shreds of credibility and integrity that he was still clinging to, insisted would not turn much if any profit for Trump. Whatever the actual revenues from the G-7 meeting itself, it would amount to the kind of advertising that money can’t buy. Doral would be better known afterward, just as Mar-a-Loco, Bedminster and other Trump properties have skyrocketed in visibility since he took office. He has made sure of it, by visiting them in a constant rotation that repurposes the presidency as a promotional tool and branding exercise.

The G-7 at Doral is just the cherry on a rancid sundae. But the timing of it: That’s what’s so chilling. It comes as the sword dangles ever sharper and more threatening over his head, and it makes clear that he won’t be answering the accelerating revelations about him with good behavior that coaxes Americans to wonder if he could really have been that bad.

No, he’ll ratchet up the badness, intensify the insolence and lash out more provocatively and ruinously than ever before. He’ll be worse. Virtue is for suckers, who don’t have the nerve for vice. Look, Ma, no morals!

The miserable Mikes, Pence and Pompeo, will race around the world trying to forestall or clean up his messes, because “get over it” doesn’t really translate to geopolitics, where the “it” can be terrorism, slaughter and an American image soiled beyond repair.

Ivanka and Jared Kushner will lay low, as they’re doing now, unable to peddle the pretty fiction that they’re keeping a lid on the combustible patriarch, who keeps setting himself on fire.

He has finally arrived on the Fifth Avenue that he conjured long ago. Remember that — when he said that he could shoot someone there, in view of all the passersby, and not lose any of his loyal supporters?

Donald Trump drops plan to host G7 at his club