It has not been easy bringing cricket back to Pakistan 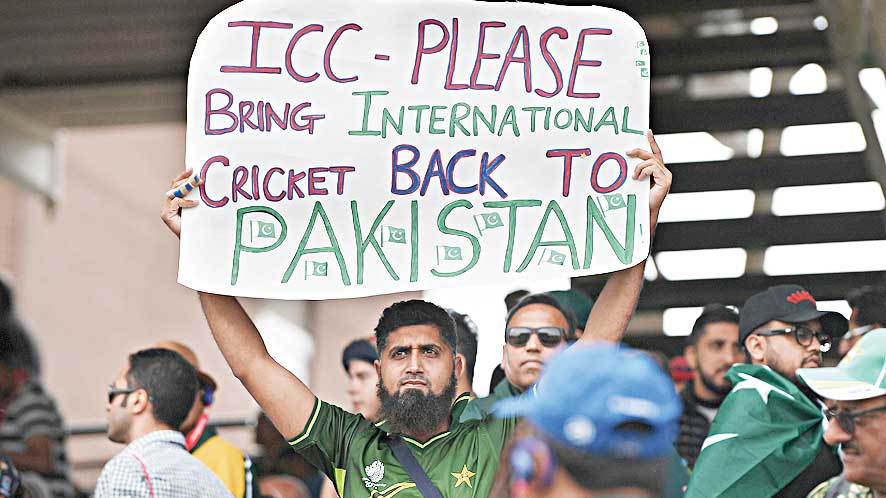 A Pakistan fan makes a request during the Group Stage match of the ICC Cricket World Cup 2019 between Pakistan and South Africa at Lords on June 23, 2019 in London, England.
Mike Hewitt/Getty Image
Mehmal Sarfraz   |   Published 28.09.21, 01:21 AM

This month has turned out to be a tough one for Pakistan cricket. On September 17, the New Zealand cricket team called off their tour of Pakistan just minutes before the first one-day international was to start, citing security concerns. New Zealand was to play Pakistan this month after a period of 18 years. The tour comprised three ODIs in Rawalpindi and a five-match T20 series in Lahore.

“[F]ollowing an escalation in the New Zealand Government threat levels for Pakistan, and advice from NZC security advisors on the ground, it has been decided the Blackcaps will not continue with the tour,” read New Zealand’s statement.

The prime minister of Pakistan, Imran Khan, talked to his New Zealand counterpart, but could not convince Jacinda Ardern. Following this abrupt cancellation owing to a security threat that was not shared with the Pakistan government or the Pakistan Cricket Board, the England tour was also cancelled a few days later. The England and Wales Cricket Board said that the “mental and physical well-being” of its players and support staff remains a highest priority and thus the tour could not take place. England’s men and women’s teams were scheduled to play in Pakistan next month.

As Najam Sethi wrote in his Friday Times editorial last week, “If NZ had shared intel in time, or postponed the matches by a few days pending further investigations, we might have been able to prove the authenticity or otherwise of the threat, enabling us to continue the matches or cancel them without acrimony. The decision of the ECB is even more infuriating. The excuse they have made makes a mockery of the rules and rigours of the sporting game. It betrays a lack of decent reciprocity and overdose of arrogant unaccountability. Both decisions have naturally evoked bitter memories of colonialism and racism among Pakistanis and triggered conspiracy theories involving Big Three injustice and Indian hegemony at the ICC.”

It has not been easy to bring back cricket to Pakistan after the 2009 attack on the Sri Lankan cricket team. Pakistan had to play at neutral venues because of teams refusing to come to Pakistan. We launched the Pakistan Super League after a lot of hard work by Najam Sethi and the PCB. The PSL is now one of the best cricketing leagues out there. It took many years and a lot of effort by the PCB and the Pakistan government to bring back cricket. In May 2015, Zimbabwe toured Pakistan. In March 2017, the PSL final was played in Pakistan. In September 2017, a World-XI played in Pakistan. Then, more PSL matches were held in Pakistan, West Indies came to Pakistan and so on and so forth. Finally, New Zealand and England agreed to come to Pakistan this year. But they both cancelled. And what a disappointment it has been. Australia and West Indies are scheduled to play here soon. We hope that both teams will not follow New Zealand and England’s unceremonious decisions.

Pakistan has always made sure that the security provided to visiting cricket teams is top-notch and ‘presidential level’ of safety protocols are followed. Cities were practically shut down in order to ensure the safety of visiting teams and players. The people of Pakistan did not complain, even though it has not been easy to shut down businesses and face mobility problems. But our people understood that this was necessary in order to bring back cricket to Pakistan. We are very emotionally invested in cricket — it unites us even in the most polarizing of times. It makes us feel happy or sad (depending on the results), but at the end of the day, we come together and we celebrate the game of cricket. Now this has once again been taken away from us. The PCB will take the matter to the International Cricket Council but this will take time. All our efforts of the past few years were undone by a threat that may not even have been credible, according to the government.

Pakistan toured England and New Zealand under the strictest Covid-19 protocols. It was not easy for our players either but we still went ahead and did it. Our players have been through the toughest of times in the past decade after the attack on Sri Lanka and the spot-fixing scandal that rocked our team in 2010. Our players have stayed away from their homeland and families for months on end. They have faced so much at a personal level apart from the stress of the game. It must be said that Pakistani players have played in the toughest of circumstances and still managed to bring a smile to our faces.

It has not been easy for the Pakistani cricket fans either. To not be able to cheer for their team at international matches in their own country. It was very tough. We felt helpless, but the past few years made things better. Now we don’t know what the future holds. We just hope that these incidents do not shape the future and do not have an impact on the morale of our cricket team. As a cricket fan, I am disappointed at what transpired this month. But I also know that we have faced such pressures in the past and that this, too, shall pass. As a cricket-loving nation, it makes us angry, frustrated and disappointed to see our cricket team go through this but we have full faith in them to move forward and prove to the world that they will overcome this too.

Prime Minister Imran Khan recently met our men’s cricket team and told them to inculcate team spirit. Coming from a prime minister who is one of the cricketing greats of all times, it surely means a lot for our boys. And for our cricket.