Advertisement
Home / Opinion / Is time really up for misogyny?

Is time really up for misogyny?

When a woman accuses a man of sexual misconduct, many men — and sometimes even women — leap to that man’s defence 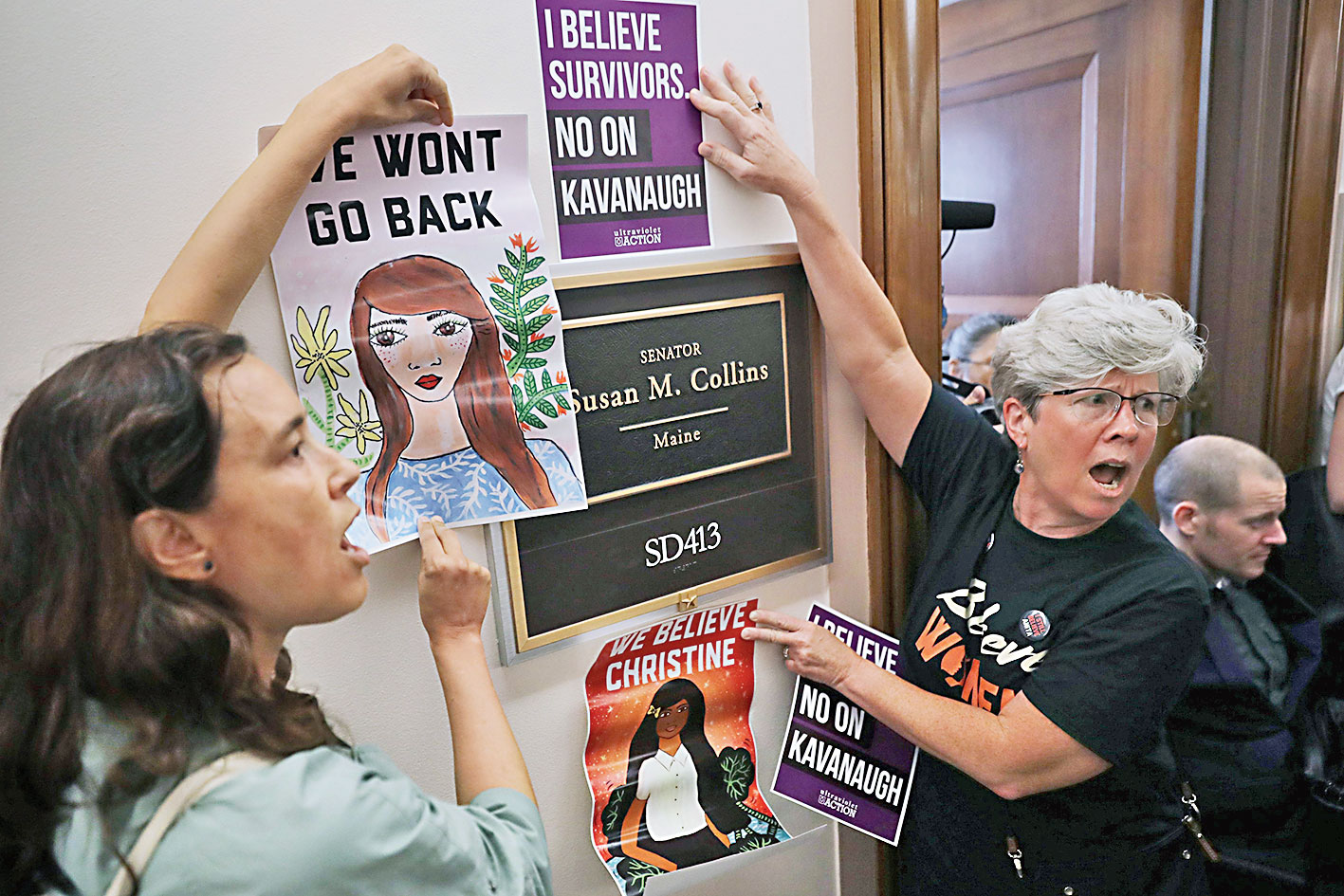 Protestors on Capitol Hill react to accusations against Brett Kavanaugh, who was then a nominee to the US Supreme Court
Agencies
Mehmal Sarfraz   |   Published 09.10.18, 10:05 PM

Christine Blasey Ford, a professor at Palo Alto University in California, had accused the then US Supreme Court nominee, Brett Kavanaugh, of sexual misconduct. According to Ford, this incident happened when they were in high school. Ford is 51 while Kavanaugh is 53 years of age. This basically means that the allegation is being made public after almost three decades.

Despite Ford’s powerful testimony as opposed to Kavanaugh’s ‘ranty’ testimony, misogyny won in the end. The Senate voted to confirm  Kavanaugh to the US Supreme Court. While it was heartbreaking to see this, it wasn’t a complete surprise. When a woman accuses someone of sexual harassment, sexual misconduct and/or sexual assault, a lot of men — and sometimes even women — leap to that said man’s defence. If it can happen in a first world country like the United States of America, one can realize how difficult it is for women in third world countries like Pakistan where our ‘closed’ society is ready to pounce on any woman who comes forward with such allegations. And God forbid if that man is a high-profile figure.

After Tanushree Dutta came forward with sexual harassment allegations against Nana Patekar, most people in the film industry decided to stay quiet. But it did give courage to Indian women to come forward and talk about their own experiences. From top editors to renowned names in the entertainment industry to politicians, many Indian women came forward and named and shamed men. This is encouraging but, at the same time, more than 80 or 90 per cent of women will remain quiet for various reasons.

There is an inherent problem with our psyche. When it comes to sexual harassment or sexual assault cases, the victim/survivor should be supported but that is not what our societies do. They almost always give the benefit of the doubt to the accused.

According to the BBC, “Over the past 20 years, only 2-10% of rape accusations... are proven to be fake, argue the authors of a 2010 US study. That figure does not include any unsubstantiated accusations where an investigation was unable to prove a sexual assault occurred, so an accurate figure for the total remains unknown. Other studies have figures in the same range. The FBI has put the number of ‘unfounded’ rapes — those determined to be false after investigation — at 8%.”

When statistics show that only 2-10 per cent of women falsely accused someone of rape for ulterior motives, why do the rest — 90 per cent of women — have to go through something akin to the Salem witch trials? The rest are telling the truth but because of the general ‘disbelief’ and the consequent character assassination of those women who do come forward, the majority of victims chooses to stay quiet. While these statistics are from the US, and we do not have studies/data to quote in countries like India and Pakistan, I do believe that in South Asia the number of false accusations may be even less because it takes enormous courage to speak out as women have to undergo a witch-hunt for doing so.

Take the case of the celebrated singer, actor and model, Meesha Shafi. She accused the singer, actor and model, Ali Zafar, of sexually harassing her. While a lot of women supported Shafi and some men also spoke in her favour, we also saw a public relations campaign on both social media as well as mainstream media that was launched by Zafar and his team. His co-actresses lauded him for being a family man, news channels promoted his film, and some television anchors did programmes in favour of Zafar while tarnishing Shafi’s reputation. Zafar also got to represent Pakistan at the Silk Road International Film Festival in China.

Why is it that when women speak out, they are labelled as ‘sluts’ or as someone who has done what she did for ‘cheap publicity’ while men are made out to be innocent souls who are either ‘seduced by an evil woman’ or are just being ‘targeted for no reason’? The concept of date rape is also alien to our society. I have heard some of the most liberal people saying that if a woman went to a hotel room or someone’s bedroom alone with a man, she was asking for it and/or she must have gone there to sleep with him. If you raise the point that even if she did intend to do just that but changed her mind at the last minute, why did the man not take no for an answer, the answers are always along the lines of, ‘well she should have thought about it before going there’. If she has to ‘think’ and cannot make a mistake, how come nobody questions the man for not listening to her ‘No’? Little wonder then that marital rape is still not talked about, let alone date rape. And then there are people like the columnist, Ayaz Amir, who, when accused of rape, wrote this in his weekly column: “If I am even remotely guilty of criminally assaulting Ms Tabassum, or anyone like her, then there should be no hope for me, and no clemency. For I would be guilty not only of a criminal offence, a serious matter in itself, but of something far worse in the eyes of the initiated: an appalling and unforgivable lack of taste.”

One should have been disgusted at this nauseating ‘defence’, but there were many men who chuckled at this and actually said stuff like, ‘oh who would want to even touch an unattractive woman?’ Do men understand that rape, sexual assault and harassment are not just about sex but also about power? And yet we wonder why it takes women so long — even decades — to talk about their abusers or rapists.

It is sad to see powerful men get away with rape/sexual assault/sexual harassment/sexual misconduct but, at the same time, it is heartening to see women come forward and talk about their experiences. More power to these women! I wish someday I would also have the guts to talk about my own #MeToo. Right now, I don’t have the guts to do so.