Shifting lives in the mangroves

Is concrete the way forward in rebuilding the Sunderbans? 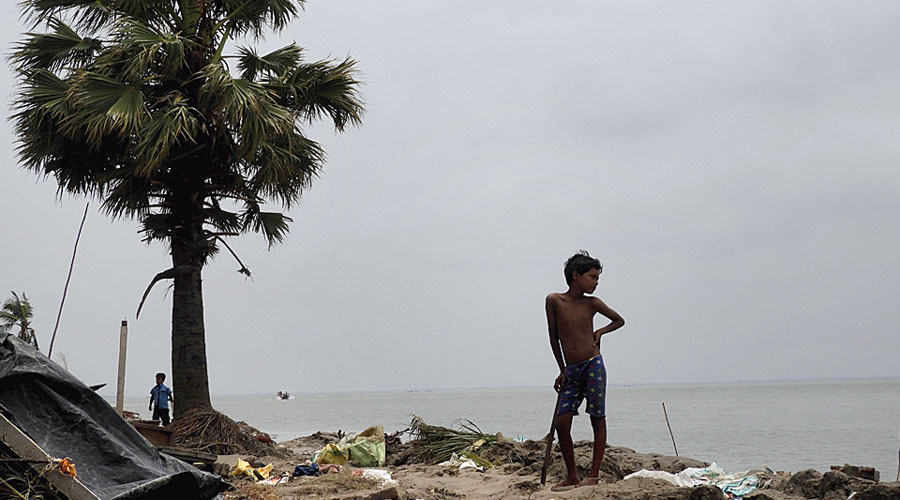 This May 22, 2020 photo shows a boy looking at the damage caused by Cyclone Amphan in Deulbari village, in the Sundarbans.
Samrat Paul via AP
Megnaa Mehtta & Debjani Bhattacharyya   |   Published 01.07.20, 12:07 AM

Since 2007, the Bay of Bengal basin has seen at least 15 major cyclones, including Sidr in 2007, Aila in 2009, Phailin in 2013, Hudhud in 2014, Bulbul in 2019 and Amphan this year. Amphan made landfall in the Sunderbans, home to five million people, on May 20. More than 13.2 billion dollars worth of property was destroyed and more than 500,000 people left homeless. An Unesco heritage site, the Sunderbans are known for their biodiversity and the conservation of the Bengal tiger. More recently, it has turned into a site for climate-resilience experiments funded by global agencies. After Cyclone Aila in 2009, the World Bank had allocated a colossal Rs 5,032 crore to the Sundarbans Embankment Reconstruction Project to build ‘modern’ cement and block embankments. These embankments were breached during Amphan, flooding homes, destroying crops and salinating agrarian fields. Before we start rebuilding those embankments, let us consider if more concrete is the best way forward.

Embankments are lifelines. The Sunderbans’ villages — ‘abad’ cleared for human settlement — are located on low-lying islands in a brackish water delta with diurnal tides. This is a unique landscape where the forest is a river. In this shifting landscape, the forest cover swells and shrivels with the ebbs and flows of the twice-daily tides. Islands experience the daily erosion and accretion of soil. During high tide, these islands would be submerged under saline water if it were not for the embankments that allow habitations and agriculture to flourish. Embankments are as old as human habitation in this region.

However, concrete and cinder block embankments of the recent past are like imposed lines in a moving landscape. Sometimes they do more harm than good. In the past decade, a 3,500-kilometre periphery of the Sunderbans islands has seen the transformation from mud embankments (bandhs) to concrete dykes. Concrete embankments are 5 metres high and 30-40 metres wide. Covered by nonbiodegradable polypropylene sheets, the concrete embankments replaced the older mud bandhs. More importantly, several thriving mangrove forests on the riverbed had to be uprooted to transform the bandhs into dykes. Mangroves are natural shock absorbers during cyclones. Without these intricate mangrove roots systems binding the soil, riverbeds begin to gradually weaken.

During Cyclone Amphan, these modern embankments, with their whopping budgets and their supposed state-of-the-art material, developed cracks, broke and collapsed. Engineering shortcomings coupled with bureaucratic corruption result in shoddy embankment construction and negligent maintenance. Thus, Amphan’s destruction was very much a disaster by design too.

Modern embankments are harder to repair quickly. Cracked cinder blocks and cement require machinery, such as earthmovers and cranes, to be lifted out, often causing further damage to the already fragile riverbeds. They also make the villagers dependent on the presence (and absence) of the irrigation department for repair work. Following Amphan, the work of repairing embankments has also been characterized by quick fixes. In some instances, several embankments were fixed during low tide only to be submerged during high tide. In various blocks of the Sunderbans, including Gosaba, Kakdwip, Hingalganj, Namkhana and Pathorpratima, the heavy material that replaced the mangroves have not only eroded the riverbed but, in several instances, also taken large chunks of the riverbed down with them, creating further mudslides and irredeemable loss of land. These supposedly stronger embankments could not withstand the strength of the cyclone. Concrete walls may not be the way forward.

For those who live on the river’s edge, embankment repair and reconstruction entail a double dispossession. First, they lose land to the swelling rivers through erosion, and then they are forced to give more chunks of land to the irrigation department for the construction of new ring embankments to fortify the existing ones. The poorest and the landless people, who belong to the lowest caste groups, mostly live on the threshold of disappearing lands on the river’s edge. Since Aila, at least one member from each of these households has migrated to cities in search of work. The Covid-19 induced lockdown has brought them back to a devastated landscape, uncertain recovery and an unknown future. Some who have returned have lost parts of their land to the river; others might lose tracts to land acquisition. As the sociologist, Amites Mukhopadhyay, has shown, the market valuation and compensation for land in the low-lying islands cannot be considered sufficient or fair when the displaced will have to pay the premium of moving to higher ground in the inland areas where local politicians, school teachers and local government officials reside.

In response to endemic cyclones and rising sea levels, environmental economists, conservationists and writers propose a project to gradually depopulate parts of the coastal peripheries of the Sunderbans through a ‘planned retreat’. They are speaking about the planned retreat of approximately 2.5 million ‘vulnerable’ people. Where would the government relocate them? Do we yet have a study of the many factors that create vulnerability? What kinds of lives and livelihoods can the government guarantee to a climate-displaced population? Let us put these well-known questions aside for a moment and, instead, ask why is it the case that policymakers think that the poorest are the most easily movable? A well-executed planned retreat to a higher ground which guarantees a flourishing life and livelihood can be the best option when it is built on consensus. Prior experience cautions us from championing this option. Yet, if we are to begin a planned retreat, why not begin by dismantling the Farraka barrage, which impedes sediment deposition, a critical part of land formation in the delta? Or, as the anthropologist, Annu Jalais, asked, why not begin a planned retreat of Salt Lake, or Rajarhat, built on erstwhile marshes, affecting the downstream ecology of this mobile landscape? One may assume that large portions of the residents of Salt Lake and Rajarhat have the economic wherewithal to move and build new lives elsewhere. Yet, such a thought is utterly inconceivable, if not laughable, for our policymakers.

Sunderbans’s ecology also demands that we reimagine relations among land, water and humans. Loss of land due to erosion (bhangan) in the Bengal delta is sometimes followed by new land deposition. A lightly-amended 1825 East India Company-era law decides the ownership of newly formed land or char. Within the ambit of this law, the landless people who move to the chars (charuas) are deemed as encroachers. What if we discarded the property-thinking in this mobile space and liberated ourselves from the idea of encroachment? Indeed, the historical archive is replete with moving markets (haats) and settlements, like those of Shirajgunj or Bakergunj (in present day Bangladesh). Only from the late 1800s did the seasonal haats begin to frustrate the East India Company: fixing people in bureaucratically-imposed lots of lands and putting markets in a fixed place became a necessary step for regularizing tax and tolls in the lower Bengal delta. Surely, we can do better than continue to blindly emulate the colonial masters we denounce.

What if we started listening to the people who wanted to move to a newly formed char? After all, we imposed these property lines and we can undo them too. Perhaps we can then begin to accept that some of the residents of these disappearing villages, who know how best to work the land, should be able to choose how they want to move as the rivers move. Might it be that some might prefer to move with the shifting land and rivers than retreat to the polluted airs of the higher ground? We won’t know the answer if we don’t ask.