What is modern about Renaissance art? 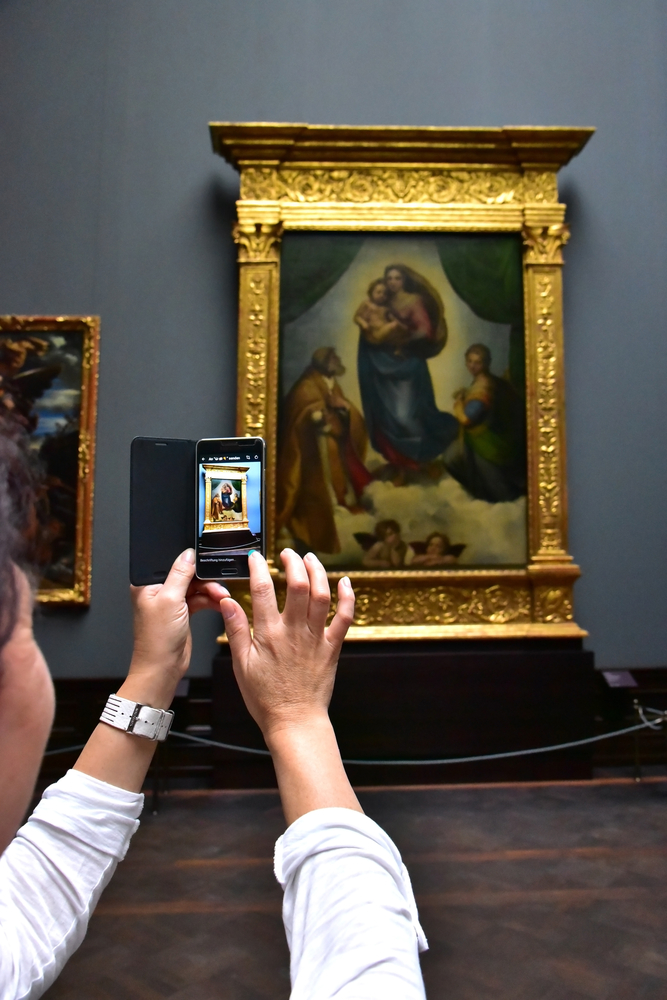 Why are the masterpieces of Michelangelo, Leonardo da Vinci and Raphael called Renaissance art? If ‘renaissance’ stands for modern, what is modern about these works of art? One possibility is that the subject of the paintings and the style of expression are both modern. On closer scrutiny, however, this does not hold true. The other possibility is that while the objects are not modern, the artistic style is. This criterion is met in these paintings. The themes in the High Renaissance masterpieces are primarily from the pre-modern — especially ancient Greece or Christianity — which modernity rejected. They consist of Michelangelo’s sculptures like Madonna of the Stairs or David, his paintings on the Sistine Chapel ceiling or of the saints; da Vinci’s The Last Supper and The Virgin and Child with St Anne; or Raphael’s The Marriage of the Virgin, Disputation of the Holy Sacrament, The School of Athens, Sistine Madonna, Triumph of Galatea and The Transfiguration. So why did these Renaissance artists choose to portray in their masterpieces themes that are rejected by modernity?

In order to understand the nature of the rejection, we need to look at the method adopted by modernity to reject the pre-modern. Descartes, the father of modern philosophy, adopts in his Discourse on the Method a novel logic of exclusion that rejects everything that is not cognitive, rational, and certain. The rejected includes childhood (the domain governed by appetite and teachers rather than by reason — the latter he identifies as the domain of adults); language; history (for him the past is like travel, which takes us away from the present); oratory; poetry (the “gifts of mind rather than fruits of study”); moral writings of pagans; customs; evolutionary growth of societies (he rejects the gradual growth of societies); he even rejects classical logic and mathematics as they are “mixed up with” all sorts of things.

This clear and ruthless exclusion, the disinheriting of the past and starting everything anew, is characteristic of the project of modernity. The radical nature of this held immense appeal not only at the time but also for subsequent generations. One form of this radicalism was formulated by Locke as tabula rasa, the complete absence of any innate knowledge at birth. This extreme form of exclusion was, however, mediated by the likes of Kant and Hegel. Kant revised the project of modernity by bringing the importance of subject and inter-subjectivity, similarly, Hegel the idea of history, Darwin, evolution, Marx social realism and Freud the unconscious. Despite these conflicts, modernity has continued to remain an indispensable way of life.

So there is no continuity between the subject of Renaissance paintings that are predominantly, if not exclusively, pre-modern and modernity. Modern science did not attempt a modern rendering of Aristotle. Instead, it rejected classical science as being metaphysical, not demonstrable, and, therefore, false. Galileo argued that science should be based on invariance, which, in turn, should be determined through evidence from instruments. In his case, it was a telescope. Renaissance art, on the other hand, did something quite the opposite — it depicted in its art themes from the pre-modern that are rejected by modernity. This is different even though the rendering is modern.

This rendering of the pre-modern in modern form was not merely a transitory phenomenon. This Renaissance thematic continued even subsequently, making this a foundational characteristic. Alfred Tennyson’s brook, “rose-bud” symbolic of childhood in the film, Citizen Kane, Paul Gauguin’s Marquesas Islandés illustrate this. Moreover, there is no prominent depiction of modern objects like telescope, gravitation, electricity or machines in later art and literature. The absence of these modern objects, coinciding with the pervasive presence of objects and themes from the pre-modern, gives rise to a serious question. If science today is modern and follows modern protocols, then in what sense is Renaissance and, later, modern art and literature modern?

Is there anything, apart from the rendering, that can justify why Renaissance art should be considered modern? This is important for us to understand as it may help resolve a serious problem facing India.

Here, I will extend the strategy of orientalism, albeit in a slightly modified version. Postcolonial critics rightly alleged that the outsider’s scholarship on countries like India is driven by their own domestic and provincial interest. That is, the underlying purpose of Indology is the outsider’s political interest in India. Indians can either reject this approach as wrong or choose to follow it. I choose the latter. As an Indian studying European art with a political interest, I find that this interest can be of two kinds: either to oppress and exploit the other or to learn from them and use this knowledge to solve domestic issues. I lean towards the second option.

Renaissance art seems to indicate an antagonistic relationship between its pre-modern themes and the ideals of modernity. However these pre-modern objects are located not in reality but in art, often enclosed in a frame and imprisoned within gallery walls. Thus removed from society, these objects from the pre-modern are rendered sterile for social and political purposes and pose no real and immediate threat to the project of modernity. The processed pre-modern inside text, canvas or stone is safe as it largely produces non-natural synthetic sensibilities that pose no threat.

Renaissance art is, therefore, hand in glove with the modern. It successfully excludes the pre-modern from significantly impacting modern life, thus extending the project of modernity. This is perhaps why Euro-American world institutions, such as galleries, libraries, museums and other spaces that house the abandoned pre-modern, receive almost sacred attention. Following Foucault, we can see how the frames separate the pre-modern from the modern. The pre-modern content is located at the centre of the painting but caged within the frame and is displayed in a public place. This is reminiscent of prison, clinic and mental asylum that are clearly excluded by modern rationality and quarantined; yet they are housed right in the middle of the city as demonstrated by Foucault in his writings. The knowledge about this subtle but effective strategy from Europe can be extremely useful in India.

India allowed modernity to co-exist with the pre-modern, without a clear separation unlike in Renaissance art. That is, the Indian nation state is desperately trying to hold together a confusing mix of modern elements and conflicting pre-modern ones, including variations in culture, language and other regional characteristics. This contradictory relationship has given rise to a grave problem. Keeping the European model before us, we can now begin to critically discuss how to establish the relationship between the pre-modern elements and the modern ideals of citizenship, nation-building, and modern educational institutions. This clarity can help India avoid the burden of carrying or merely dragging these two incompatible social domains that produce more mess and remain unwieldy. This will enable the country to make progress. Otherwise, we will be left to deal with crisis after crisis through haphazard ad hoc decisions, while the struggle to contain two incompatible domains remains. It is imperative to recognize this as a dire problem and urgently explore ways to navigate the different layers of the complex relationship between these incompatible domains.

A weary modernity: the rise of non-reason