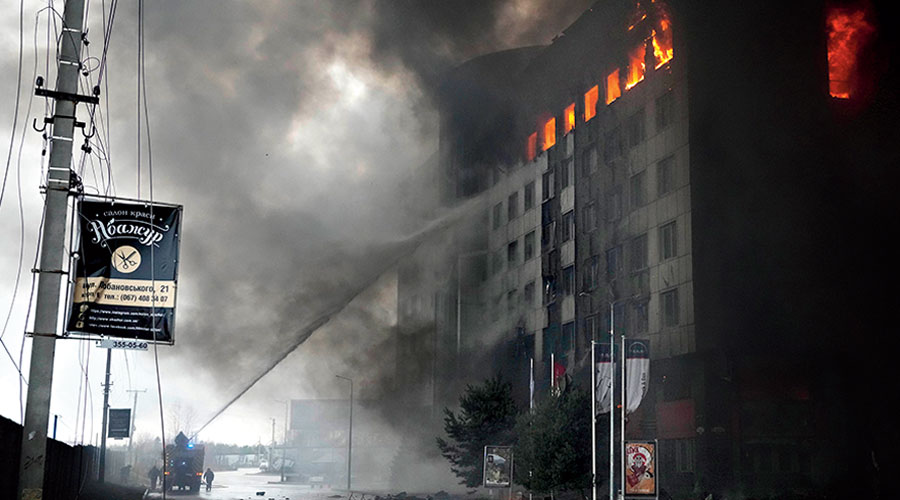 Even after the Second World War, there have been numerous conflicts between countries, civil wars within nations, and continuous instances of ethnic hatred and racial violence. The list is long: Korea, Vietnam, Bangladesh, Afghanistan, Iraq, Bosnia, Chechnya, Rwanda, Palestine and Kashmir, to name just a few places. Military might and strong majoritarian beliefs have been the determinants of who inflicts the maximum damage and who suffers the most. Those who die or are injured seldom want any violence to occur. Those who initiate the violence seldom die or are injured, unless they are hunted down with a singular determination like in the cases of Osama bin Laden or Saddam Hussein. Iraq was completely destroyed by the United States of America on an erroneous belief that there were weapons of mass destruction in Baghdad despite evidence to the contrary. Now, in the latest display of brute force, Russia is invading Ukraine on the suspicion that the country poses a vague threat in an indefinite future.

Might is right in the current international order. The use of coercive force and violence is always rationalized by the aggressor in terms of ‘national interests’. The aggressed nation is not supposed to have national interests worth mentioning. Most other nations, not directly affected by the conflict, prefer to remain neutral, or make ineffective noises. Neutrality stems from the fear of the bully; but the stance is couched in terms of national interests. It pays to be neutral. Quite expectedly, that has been the argument made by India’s strategy experts and political commentators about India’s abstention in voting against Ukraine in the United Nations.

This argument, used many times in the past and in many nations, does not stand up to serious scrutiny. What does national interest mean? Is there an overarching understanding of what constitutes a universal benefit to the nation? National interests are the interests of the rich and powerful. In international conflicts, considerations of national defence receive top priority. But if a hungry Indian claims that for him/her, the national interest lies in getting more food and less of guns, then is he/she wrong? There being no system of binding international governance, the interests of the rich and the powerful will prevail in the international arena. People will be condemned to live in a world where brute force is the only game in town. But it need not be so. National interests are a reflection of lazy thinking popular amongst opinion-makers and media-influencers.

Any violent conflict between nations, ethnic groups or races can be reconciled by invoking a higher principle than that of national interest, such as those contained in the Universal Declaration of Human Rights of 1948. National interests can be problematic in other ways too. Suppose a nation is claiming as its national interest the preservation of democratic freedoms and non-coercion over strangers. The same nation may have democratic freedoms severely compromised for a section of its own citizens, for instance a religious minority. There is bound to be a contradiction in the search for justice.

Each of the articles in the Declaration of Human Rights seeks universal guarantees and facilities for all human beings independent of nationality, race, religion, ethnicity or gender. Why is this argument more powerful than the one  in defence of national interest? Conflicts over group interests — international or intra-national — tend towards violence. The invocation of human rights leads to reconciliation, stemming from a mutual respect for differences. The simple truth is that while we have multiple identities, being human is the only one that cannot be changed as long as a person is alive. One can change one’s religion, nationality, social and political beliefs, even one’s gender. The only immutable identity is that of being human as well as the basic interests that are shared.

There is a need to move beyond national priorities dotted on an international spectrum of vested interests towards a more global approach encompassing all human beings. While national interests can converge, it does not mean a convergence of freedoms, liberties and security within nations. The discussion on global interests has to move beyond the talk of death and bodily harm, destruction of property, denial of freedom and liberties, into the more elementary aspects of violence, such as deprivation in terms of food, education, shelter and economic security. Most people do not know that malnutrition kills more people in the world annually than do military conflicts.

Another reason why the human rights approach ought to trump the national interest approach is that the world has become too integrated, with or without the expansion of free trade. Technology has increased connectivity in leaps and bounds. Challenges like climate change, pandemics, and cyber-attacks are global in nature and solutions can emerge if — and only if — people all over the world cooperate on the shared understanding of a common threat. To enable such a world, Article 28 of the Universal Declaration of Human Rights states “everyone is entitled to a social and international order in which the rights and freedoms set forth in this Declaration can be fully realized.”

An interrelated world can never have a completely isolated conflict. The nations or groups engaged in violence raise their spending on weapons. Neighbouring countries, even if not engaged directly in the conflict, may wish to raise their military budgets. Their neighbours feel threatened and spend more on guns. There is a spiralling effect on military budgets across the world. Each nation finds that it can spend less on food, health and education: analogous to the famous guns and butter example of national or global production in elementary economics textbooks.

The international order allows massive violations of human rights. The rules have to change. If they are to, the pressure has to come from ordinary citizens. After all, people are responsible for what their governments do and what they say. However, people often get seduced by the practical considerations of the ‘real’ world where one is supposed to play a strategic game of chess with destruction and death. The human interest is the most universal goal. The first step towards attaining that goal is to begin thinking about compatriots and strangers in a similar fashion — their needs, anxieties and well-being.