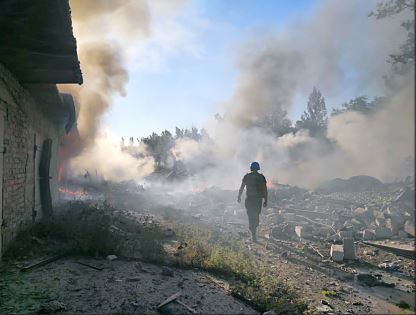 It is now five months since the first Russian tanks went deep into Ukrainian territory, and the first Russian jets rained bombs on Ukrainian towns and villages. It has been a brutal, bloody, war with perhaps 20,000 Russian soldiers killed in the fighting and probably twice as many Ukrainian men in uniform. The civilian casualties have been substantial too. Millions of Ukrainians have been compelled to flee their homeland to find temporary or permanent refuge in other nations. The economy of Ukraine has been ravaged; once the conflict ends, it shall take decades to restore it to its past position. And the lives and livelihoods of ordinary Russians have also been grievously affected, both because of Western sanctions and the costs of a war initiated by President Vladimir Putin.

Viewing the conflict as a member of the human species, I am horrified by the barbarism of the Russian military, its obliteration of the physical infrastructure of entire cities, its bombings of hospitals and civilian shelters, its assaults on Ukrainian women. Viewing the conflict as a citizen of India, I am dismayed by the pusillanimity of my country’s government, its refusal to condemn the invasion and its silence in the face of Russian atrocities.

When the war began in late February, and even through March, it was perhaps necessary for the Government of India to adopt a policy of wait and watch. It was not clear how long the conflict would go on; there was even talk of an early settlement. And getting the thousands of Indian students in Ukraine back home was obviously a top priority. However, as March turned into April, and April into May, and the cruelty of the Russian troops became more evident, it should no longer have been tenable to maintain a neutral position. It was clear that all that talk of the invasion being a reaction to Western provocation rang hollow. Anyone with any sense could now see that the war was being conducted by Putin not to prevent Ukraine from joining NATO, but to teach the Ukrainians a lesson for not bending to his will. The Russian president was possessed of a maniacal delusion that he was a modern-day incarnation of a medieval emperor, unifying Russia and all its neighbours into one nation beholden to one all-powerful Leader. He, and his army, would seek to make these fantasies a reality whatever the cost to the Ukrainians or, indeed, to the Russians themselves. (The latest, but by no means the least, example of the venality of the Putin regime is its bombing of the port city of Odessa immediately after signing an agreement allowing Ukraine to export wheat.)

President Putin believes that the Ukrainians are really Russians by another name, and they need therefore to be united with the motherland, by force if necessary. However, if these five months of war have revealed anything at all, it is that the spirit of nationalism among the Ukrainians runs very deep indeed. They see themselves as a different, distinct people, who deserved, and must retain, a national identity of their own. Before the invasion, there were perhaps a fairly large number of Ukrainians who were happy to acknowledge, and even stress, the cultural ties they shared with Russia. Not anymore. Now, a majority even of those Ukrainians who speak Russian at home refuse to countenance a political union with Russia.

The spirit of nationalism which animates the Ukrainian resistance to Russian imperialism recalls the spirit of nationalism that once animated Vietnamese resistance to American imperialism. It is wise to remember that India, a country itself born out of a successful Independence movement against an imperialist power, spontaneously supported the Vietnamese when they sought to free themselves first from French and then American overlordship. Despite India’s reliance on American economic and military aid in the 1960s — the former crucial in averting famine — we did not hesitate to point out to the US government that what it was doing in Vietnam was both morally wrong as well as politically unwise.

Another parallel even closer home comes to mind. In 1970, the people of what was then East Pakistan became increasingly disenchanted with being economically exploited, socially discriminated against, and politically oppressed by what was then West Pakistan. Their innate Bengali nationalism was asserting itself against an imposed Islamic identity. They yearned for a nation of their own. However, the military regime in power in Islamabad insisted that the East Bengalis were Pakistanis before anything else. They sought to violently suppress the rebellion, leading to India’s intervention and the creation of an independent nation of Bangladesh.

The Ukrainians are to the Russians now what the Bangladeshis once were to the Pakistanis —namely, a people with an independent national identity of their own seeking to free themselves from being overwhelmed by a more powerful country falsely claiming to share (and represent) their identity and their history. Back in 1970-71, India rightly castigated the Pakistani army for its savagery, rightly gave refuge to millions of refugees from East Pakistan, and rightly used a modest amount of military force when it became feasible and necessary. Admittedly, since Bangladesh was next door and Ukraine is far away, this sort of material support is not feasible in this case. But must we go to the other extreme and — by our continuing refusal to condemn the Russian invasion of Ukraine — be complicit in the crimes of Putin and his men in Ukraine?

One may speculate about the reasons behind the Government of India’s deeply unsatisfactory response to events in Ukraine. Perhaps it is our dependence on Russian military supplies that is at work here. Perhaps the ruling party’s ideologues fear that if we stress the fact that Ukrainians have the right to be a free nation, then some people might make the same sort of case for the Kashmiris or the Nagas. Perhaps the government hopes that by diversifying our sources of oil, it may be able to keep inflation under control and, thereby, avert social discontent. Perhaps even after eight years as prime minister, Narendra Modi is not really  au fait  with the complexities of international geopolitics and thus cannot take a stand.

Whatever the reasons, the Government of India’s position — or more accurately, its lack of a position — on Ukraine is both morally untenable as well as politically imprudent. Our external affairs minister, speaking in Krishna Menonesque mode, has accused European nations of hypocrisy for using Russian gas while criticising India for buying Russian oil. That the West can be hypocritical is not exactly breaking news. What may be pertinent here, however, is the Government of India’s own hypocrisy in this regard. Next month, we mark the seventy-fifth anniversary of our Independence from British colonial rule. This anniversary has been widely publicised by the Modi Sarkar; there is not a government advertisement, press release, or email that does not mention that this is our Azadi Ka Amrit Mahotsav. And yet, in this exuberant celebration of seventy-five years of political freedom, the Indian government cannot bring itself to acknowledge the continuing existence of imperialism in the world today, as manifest most starkly in the Russian invasion of Ukraine.

There is a compelling moral case for Indians to support the brave resistance of the Ukrainian people. And I believe there is a political case too. Because of our economic and demographic size, and our military and other assets, India has for some time now been taken fairly seriously in global public affairs. Given China’s own tacit endorsement of Putin’s actions, had our government more forthrightly condemned the invasion it might have helped put real pressure on Putin and his regime. India’s support could have decisively swung the narrative against Russia, compelling it to come to the negotiating table. Had our government acted thus, it would have enhanced our credibility on the world stage as well as helped bring the suffering to an end.