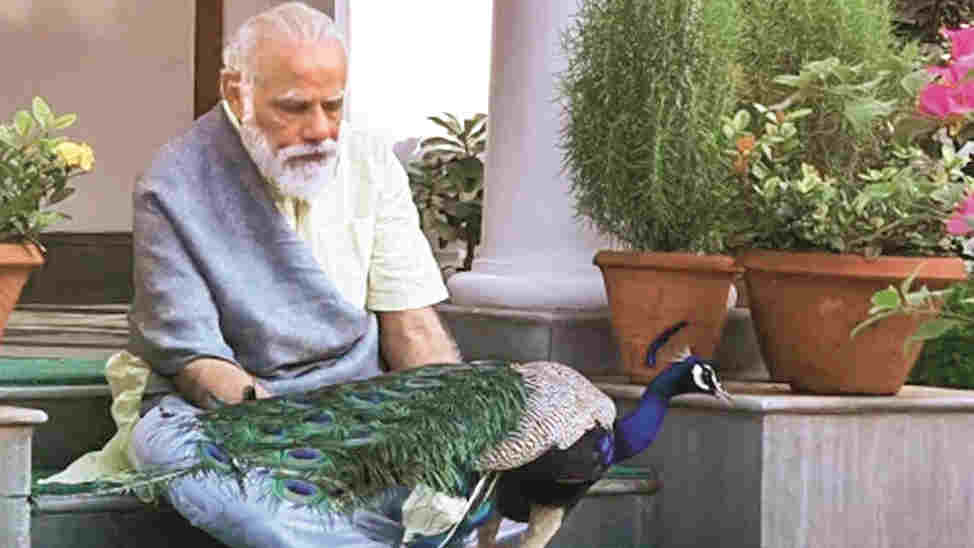 We are living a future that we are not recognizing as our present; it is taking us in, layer upon layer, in ways that we probably need to recognize if we are to be able to combat its consequences. Else we run the peril of leaving ourselves irredeemably diminished.

We are living a repetition of lies — malevolent lies, constructed lies, deliberate lies; blatant, unembarrassed lies. Nothing happened in seventy years. But now we’ve arrived in achchhe din. The leader can do no wrong. Besides, there’s none other than him. Corruption has been wiped out. Women are safe, and the RSS is a cultural organization. Varanasi is galloping towards becoming Kyoto and India towards becoming Vishwaguru. We shall be tagged a five trillion dollar economy, an act of god has probably delayed things a bit, but we shall soon arrive there. A hundred smart cities are prepping in the mixer, about to spill out. All homes have been lit. There is no open defecation anymore. That is one of the reasons we have done better than most others in our fight against the coronavirus. Such lies. Or lies like the lie on the losses to the Chinese in eastern Ladakh: no one came, there’s nobody there, those that tried to come, we stared at and repelled. Passive lies too, passive as pronouns; the sudden annulment of “China” from the prime minister’s vocabulary is akin to the annulment of truth. We are living such annulment. But such are the truths handed to us by the establishment as fundamental articles of faith.

We are living the wantonly piled weight of deficits upon us — the surging double-helix of unemployment and consumer prices, the bleakness of an economy wilfully mismanaged, the inspired erosion of social security, the onward-upward march of the coronavirus. We are living ridden lives — with hunger and scarcity, with joblessness, homelessness, dislocation, with uncertainties over today and cascading angst over tomorrow. What’s there to assure us that once the perils of this deathly epidemic have been contained and put away — some day, surely, though nobody yet knows — the clamour and chaos over what preceded its arrival will not again descend upon us — the flaming demagoguery and disquiet over who is Indian who is not, and how one shall be sorted from the other like rotten chaff from grain, our plurality tortured into homogeneity. We are living in the lee of such anxieties.

We are living the frequent ridiculing and scorning of ourselves. In this marooning of ourselves by tough tides, we are invited to gawk at a tableau of medieval majesty, and applaud — the emperor strolling his bespoke estate, peacocks prancing and preening; the emperor cutting his path through the loops of the spectacle as if it were all so quotidian and dreary he could not be bothered to notice the splendour of peacocks at untrammelled dance; the emperor then taking a break to feed his favoured bird, a piece shot in two sequences, once seated on a sofa, once squatting on the ground; the emperor then resorting to a spell of reading, or so it appears, his favoured bird looking askance at his feet. All through this, the emperor having changed his clothes five times, probably six, it’s often tough to keep count. The visual treat is followed by an audio repast. An engaging vocal-for-local menu of dogs and the virtues of native breeds and pedigrees, and toymaking; the imperial proclamation of a nationwide meme competition staged by the official portal of the sarkar, teamed with multiple quizzing opportunities on food and nutrition. Shades of Haile Selassie feeding lions and other favoured pets in the menagerie of Addis Ababa’s Jubilee Palace while Ethiopia lay famished in her ruins. However, ours seems not to reason why, we are happy audiences to such sublime stuff of distraction from all that should really bother and concern us. We also want to live the indulgence of our delusions; we see an ascetic where there is only calculated pomp and callous extravaganza, from that cave retreat in Kedarnath to the private lawns of 7, Lok Kalyan Marg.

We are a living parade of the compliant and the complicit. We clap when we are asked to clap. We turn off the lights when we are commanded to. We willingly sacrifice and suffer and believe it to be a necessary virtue because sacrifice and suffering have been so decreed. We have stopped to ask what for? Or who for? We have stopped to think for ourselves. We listen to the most absurd mumbo-jumbo with rapture and invest in ludicrous wisdoms against our good sense and knowledge. We wantonly ignore the disfiguring of our history and heritage. We seem to have forsaken our collective intelligence to embrace pure baloney, or at least we don’t seem to mind it. The prime minister spins a tale of extracting gas from the gutter and giving it flame. The education minister tells us that astrology is the highest of all sciences known to man. The aspiring finance minister reveals the magical innovation of using footwear sales to turn the economy. His boss once proffered the alternative of pakodas. Papad and gau mutra have been hawked as effective antidotes to the pandemic.

It will not do to ignore such claptrap, or merely laugh and mock and move on. That is to miss the meaning of why such claptrap is being showered down upon us. Or why sacrifice is being demanded. Or why compliance is being assumed. Or why lies are being told and festered. Or why the prime minister devotes time and resources — public resources we must presume — to having himself shot among peacocks, or why he begins a discourse, with no reference or relevance, on native dogs and the benefits of breeding them.

The truth may be this, and it is for us to grasp: we have been systematically turned into a laboratory of diminution, we are willing material for dipstick trials. Each time idiocy or affront is inflicted on us is a test of how much we can be reduced; each time we are ordered to swing and dance in unison is a test of how much we will obey; each time we are goaded under the burdens of cynically imposed adversity — remember demonetization? — in the name of national interest and the larger good, it is a test of how much we can be heckled; each time a miscarriage is enacted, each mindful mutilation — political, social, economic, administrative, judicial — is a test of what we will witness and let pass. Indians have never before been persuaded to hate fellow Indians so radio-actively as today, nor to celebrate the pillaging and plight of fellow countrymen. Indians have also never been so robbed and poorly across aspects of their lives and not thought of complaining. We are living the funereal carnival of our dispossession. And we probably do not know. Successor generations might turn to ask: What were you applauding?