The economic impact of heatwaves is steep 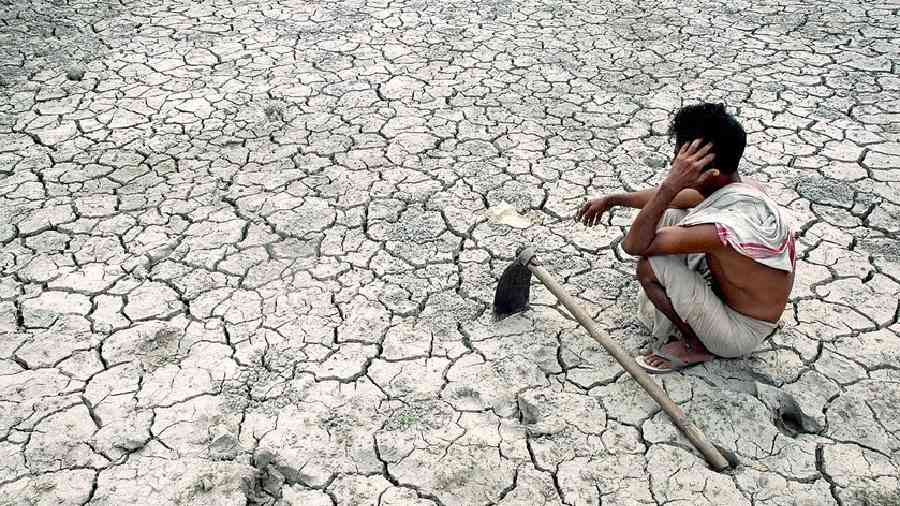 The most obvious is agriculture where the government has just banned wheat exports, the latest and sharpest in a series of responses to the shortfall caused by the sudden rise in temperature in mid-March, a critical time for crop maturity.
Representational picture
Renu Kohli   |   Published 17.05.22, 02:54 AM

India is feeling the heat in ways other than the rising prices. The ongoing heatwave, in which temperatures have shot above 45 degree Celsius in many parts of northwest and central India, highlights the rising climate risks and their attendant costs. Heatwaves, beginning earlier than in the past, are part of a changing climate whose defining features, in addition to the gradual rise in temperature, are an increased frequency and intensity of extreme weather events. The human and economic costs of extreme heat conditions often go untraced and uncounted even as adaptation diffuses recognition somewhat. Summed across the population and over time however, the costs are significant. So are the macroeconomic consequences. The current heatwave illustrates some of these.

The most obvious is agriculture where the government has just banned wheat exports, the latest and sharpest in a series of responses to the shortfall caused by the sudden rise in temperature in mid-March, a critical time for crop maturity. Expected yield losses are about 15-20%, production is estimated to be 6% less than what was initially projected (111.32 million tonnes), with some reports stating that the internal assessment is less (98 mt) and that the struggling public procurement could be half the original target. Wheat proportions in the food subsidy scheme stand diluted, wheat allocations to 10 states under the food security law have been cut, procurement times extended, and quality specifications relaxed. Price pressures are never far behind output deficits and, predictably, wheat prices rose almost 10% year-on-year against 8.4% food inflation in April from 7.7% in March; wheat flour or atta prices have risen too.

Altogether, the supply-demand developments triggered by the unusual heat impact aggregate output and consumption. The macroeconomic consequences are significant because a large fraction of Indian labour is farm-based, low-earning, with a high marginal propensity to consume. Cumulative costs of such deviations in temperature rarely feature in the public discourse or are recognized, but studies over long periods capture substantial effects of increased temperatures upon crop yields, real wages and rural mortality rates. In this instance, besides denting the macroeconomic outlook and disrupting business plans, the sudden export ban has also damaged India’s credibility because the prime minister himself stated recently that Indian exports would help resolve global scarcities.

Other costs are less obvious but not insignificant. For instance, adaptation pushes up demand for cooling and, hence, electricity. But that is a mixed blessing. Sale of air-conditioners have risen. But an exponential increase in power demand in this instance has aggravated an existing coal deficit, elicited emergency measures from the government to restart imported coal-based power plants by importing expensive coal, prompted a new coal-fired power plant by the NTPC and facilitated expensive liquefied natural gas imports. In other words, there has been an increase in the use of coal despite the long-term intended shift to clean and renewable energies where India is progressing well. Two-thirds of our electricity generation is coal-based, a key source of carbon emissions that contribute enormously to global warming. Then, disruptions and costs range from rake shortages and passenger train cancellations to augment coal transportation, halted business operations due to power diversion from industries to residential units, long and unannounced outages, gigantic backup charges and more such. Eventually, these costs will devolve upon ordinary consumers in the form of raised electricity prices.

The stock of human capital, which is positively correlated to economic growth, is directly affected by heatwaves through increased mortality rates and reduced productivity of labour. In this instance, Maharashtra is reported to have recorded 374 cases of heatstroke in March-April, registering 25 deaths, the highest in last five years. With the heatwave persisting into May, the total count will be known later; in 2016-20, 5,159 deaths or almost 14% of lives lost to ‘forces of nature’ were attributed to heatstroke according to reports citing official statistics.

Besides premature deaths, extreme heat exposure reduces productivity by lowering capacity for outdoor work and the loss of working hours as workers in heat-exposed occupations and workplaces without cooling/air-conditioning cope by not stepping out during peak heat hours. In a 2020 study on liveability and workability in India, the McKinsey Global Institute estimated about 15% of daylight hours were lost on an average across India and could further increase by 15% by 2030, risking 2.5-4.5% of GDP (roughly $150-250 billion).

The poorest are the most vulnerable because of their limited adaptability. A large percentage of India’s low-educated, un-skilled, less-skilled, and low-earning population is engaged outdoors (agriculture, mining and quarrying, construction) or works in considerable heat-exposure (manufacturing, hospitality, trade, transport and so on). Many self-employed people, daily wagers, such as rickshaw-pullers and hawkers, are severely heat-exposed. More than half of India’s GDP requires heat-exposed work, pointing to significant economic costs. Unsurprisingly, a study by the Reserve Bank of India has found that raised temperatures are associated with reductions in total trade as well as manufacturing activity.

These are a few costs, but these not exhaustive by any means. But noting these underlines the fact that such costs and losses are not one-off but repetitive. Moreover, these are mounting because of a significant rise in India’s average annual temperature in the past two decades. They should also prompt thinking about what the future costs could be if, as the Intergovernmental Panel on Climate Change report (2022) finds with high confidence for South Asia, there is a spread of heatwaves and a spike in raised temperatures. The report assesses that vulnerability, including India’s vulnerability, is high because of poverty, challenges to governance, limited access to basic services and resources, violent conflict and high levels of climate-sensitive livelihoods. In fact, studies projecting a persistent increase in temperature in India sans mitigatory actions find that living standards measured by per capita GDP could be lowered by 6.4% by 2100.

That is distant but in reality, and as the present heat conditions bear out, the macroeconomic consequences, ranging from inflation, income-consumption effects, disruptions and prospective uncertainties, are significant enough to deter investments, especially in susceptible sectors. If we were to factor in that besides incomes and nature of work, geographical location further aggravates the unequal distribution of the human and economic costs, it will be easy to recognize the socio-political spillovers due to displacement, forced migration and other coping mechanisms. These will only add to the rising costs.