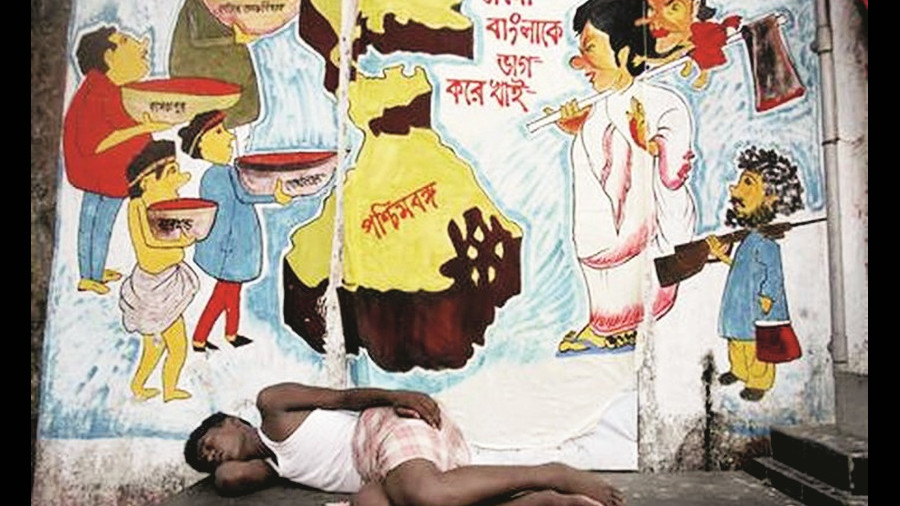 Elections are usually seen as celebrations of democracy, as festivals of plurality that mark Indian culture. But the elections this year feel different — almost eventless — a burlesque of politics enacted as a reflex. Election time this year is eventless as history. All the incidents seem to be borrowed from earlier plots. If you mention violence, experts reply that it is an old habit, tracing its genealogy back to a different era.

The political scripts are also mediocre even if the challenge before us is ominous and devastating. We are facing the irony of an electoral democracy where the regime is destroying the very institutions that made democracy meaningful. In fact, there is a sense of continuity without vision. Probably the best example is the launching of the Central Vista project by the Bharatiya Janata Party, a celebration of monumentality without achievement, which I guess is Narendra Modi’s idea of a Parliament.

Instead of challenging the Haussmannic imperial idea of power present in Lutyens’ Delhi, Modi shows he is native to this imagination of power without responsibility. The elections in various states look like silent movies, without ideas, with each actor semaphoring his intention of holding on to power. One usually holds an election as a review of policy or a rethinking of power. One senses little of this in politics.

There is, as an acute observer told me confidentially, a surreal in the banal. Take Tamil Nadu’s case. The election looks like a revivalist cult centring on V.K. Sasikala and J. Jayalalithaa. It is more a tribute to the two corrupt matriarchs than an assessment of the All India Anna Dravida Munnetra Kazhagam. The struggles seem pitifully local. There is no sense of big issues.

Politics in Bengal looks like a collection of vendettas. The ease with which politicians shift parties makes one wonder if loyalty and commitment are part of politics. Kerala seems more haunted by corruption. The BJP rescues E. Sreedharan from the mothballs of retirement, promising a new technocratic Ram rajya. It is eerie to watch a man with impeccable credentials succumb to the halo of power.

The entire electoral scene is built on the superficial, more a battle of identity and reservation politics than a contest involving serious debate on issues. There is an indifference, a lapse in memory, as if the vaccination was timed for the election, a sense that between vaccine and vote, India is returning to normal. The Communist Party of India (Marxist) pulls off one or two redeeming moments, too little and too late as it hosts a lot of student candidates and not its habitual gerontocratic club. As a friend wryly said, Covid-19 has had an impact at least here, as older people are seen as vulnerable. Frankly one does not see a vibrant India at the elections. It is more a voyeuristic India propping up local issues. The excitement of democracy and the magic of an open polity are sorely missing.

There is a word that soldiers in World War II coined for such a meaningless situation where activity presumes the normal but adds little to the meaning. They coined the word, SNAFU, an acronym that means ‘situation normal, all fouled up’. India conducts its elections as empty rituals over the glorious mess of institutions and governance it has decimated.

I want to highlight a few issues that worry me as an academic and a citizen. The election did not provide time or place to initiate civil society into the election process. There is no alternative to civil society activism given the emptiness of political parties. The Left sounds vacuous, and the Right increasingly pompous. The citizen has to reinvent a politics of ideas and institutions. At a crisis level, it has to immediately rehabilitate the three things that the regime has destroyed — civil society itself, the university as a microcosm of a knowledge society and the environment as a source of livelihood and a vision of diversity and ethics.

The idea of civil society needs to be revived as a source of diversity and plurality, as a nursery for ideas that the marginal and the minority can thrive on. Civil society has the political humus to create alternative imaginations when ideologies and technocracies dry up, becoming aridly repetitive. Civil society must challenge the simulacra of the Rashtriya Swayamsevak Sangh that the BJP has propped up as its idea of community and civility. When the cadre pretend to be communities, one creates disciplines without normativeness, obedience without a sense of conscience. It is civil society that sustains plurality and the nation state. Civil society offers the fecundity of dissent, which no cadre or clerk can generate. It is in the potentialities of dissent that the Johnny Appleseeds of our future democracy will survive.

Once civil society becomes an organic entity, fertile with plural ideas, the citizen must strive to create a community of playful ideas from the adda to the panchayat to the university. Each is a critical institution that creates the fertility of debate and ideas. The character Amartya Sen called the Argumentative Indian should become a creative figure in all three theatres.

Sadly, the university has been emasculated by this regime while it hides its academic crimes behind the New Education Policy. The policy report turns knowledge into a giant tutorial college that even Macaulay would have loved, a secretariat for clerks when we desperately need new inventions.

The modern university has to be a place of experimentation. One invokes in this context not the current Santiniketan but the original Santiniketan that Rabindranath Tagore, Patrick Geddes and J.C. Bose conceived, a university which could carry out a dialogue of civilizations and disciplines in its search for a livelier holism. Only universities can maintain a dialogue of civilizations to challenge the uniformity of the nation state, which literally cannibalizes citizenship today.

Civil society has to create a new imagination around human rights rather than rest content with the idea of citizenship as it exists. One needs a concept that is more life-giving to the displaced, the defeated and the excluded. India’s silence over the Rohingya reflects the death of a civilization even as the nation state preens itself on its tactical handling of the Myanmar army.

The idea of environment has to be reworked beyond the current notion of nature as a commodity, a resource or a tourist spectacle. Like the Maori and as suggested by many leading scientists, nature must be represented in the Constitution in the full sense of the idea of the sacred and in terms of ecosystemic diversity for issues like livelihood to become legal, cognitive matters and for citizenship to become an inclusive dream of dwelling and hospitality tackling the politics of development and ethnicity.

Civil society in a more participative sense must add to the vitality of institution-building. It must create knowledge panchayats, which debate the issues of science, diversity and livelihood from different perspectives. Citizenship must challenge the obscurities of expertise more creatively while sensing the new uncertainties and complexities of knowledge. The silence around the coronavirus has to be worked into a series of participatory scenarios that make science more meaningful for citizenship. The recent farmers’ strike needs a different response from the regime and the civil society as the future of agriculture extends beyond the fate of any election. Whether in agriculture, education or public health, there is a need to create a science policy, which reworks the relations among knowledge, livelihood and democracy. The alleged ‘benign neglect’ of the farmers’ strike is an obscenity of attitudes democracy must avoid. Civil society through its involvement must atone for the indifference of the regime.

Finally, one has to confront the levels of violence in our society and create institutions that can work creatively around these problems. Sadly, our democracy has lost its sense of civilization and its short-term memory of violence over the last two decades. An information society that specializes in erasure and surveillance is the last thing India needs.

This range of challenges before us shows that elections have turned cosmetic. We need new forms of institution-building where new ideas as alternatives are worked out. A non-violent society needs a satyagrahi in law, science and governance who adds constructive work to protest for democracy to be playful and inventive again. The Stalins, the Mamatas, the Modis, the Amit Shahs add little to the imagination or to the future of Indian democracy. It needs a different set of dreamers with a different quality of conscience. Current politics is too impoverished to provide it. The Party must return to civil society to re-educate itself.