In Manikarnika’s retelling of a truly inspiring historical tale, the real Rani is lost 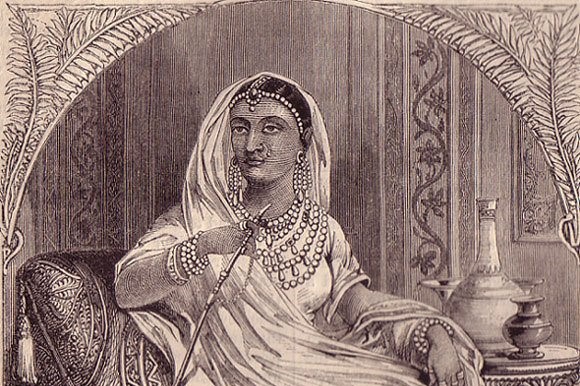 Tapti Roy is a historian and the author of Raj of the Rani and Print and Publishing in Colonial Bengal: The Journey of Bidyasundar

In the years that followed the tragic loss of her three-month-old son in 1851 and her husband in 1853, Lakshmi Bai took charge and came into her own. She managed the estate for four years, keeping up continuous negotiations with British officials for the rights of the adopted son of Gangadhar Rao to the throne of Jhansi. Within three weeks of her husband’s passing, Lakshmi Bai sent what was the first of a series of letters to the British government, arguing cogently and coherently the grounds on which the claim of their son, Anand Rao, was both fair and legitimate. Asked to leave the fort, she moved to the town palace from where she ruled from 1853 to 1858. It was her meetings with the British officials to plead the case of her son that were the most dramatic, both for the manner in which they were choreographed and the effect she had.

Major Ellis, the young political assistant based in Jhansi, was the first to be impressed by the Rani, whom he met practically every day. He requested his superiors ineffectually that she be given a fair hearing. He advised the Rani to appoint a British lawyer to represent the case in Calcutta.

John Lang, the barrister and journalist selected for the job, was given a lavish welcome in Jhansi. He then sat before the Rani for a meeting that started at six in the evening and lasted till two in the morning. His observation, that if the governor general had had the fortune to meet Lakshmi Bai he would certainly have returned Jhansi to be ruled by its beautiful queen, spoke volumes of her charm. By accident of design, the purdah moved, and Lang came face to face with the dazzling presence of Lakshmi Bai. She had a similar effect on the senior agent of the governor general, Robert Hamilton, who had turned down Ellis.

The verdict that her appeal had been rejected by Dalhousie reached Jhansi on the day of Holi, and quite dramatically, festivities were stopped. The town until recently marked it as a day of mourning.

Lakshmi Bai’s grit and fortitude were tested after the mutiny and uprising in the summer of 1857, a moment the film clumsily reduces to Indian sepoys striking down and killing Gordon and his family and a few other white men and women. Contrary to popular perception, Lakshmi Bai did not take the leadership of the rebels and mutineers, and was disapproving of their actions. What rankled badly was that all British men, women and children were rounded up and killed in cold blood. She was surrounded by forces who proclaimed that the British governance had been replaced by the rule of the Rani, and yet she had no control over them. She returned to the Jhansi fort and tried to establish contact with the British counter-insurgency forces, not as act of cowardice but of prudence and good sense. But the British were unforgiving, as the death of white men and women in Jhansi closed all options. The Rani became one with the rebels in British eyes.

The rest is well known. Realising what was in store, Lakshmi Bai resumed her riding practice and began training young women to increase the strength of the army. Major General Hugh Rose, the commander of the Central India Field Force, was a 56-year-old war veteran, not a young officer who would cross sabres with soldiers on the field. Lakshmi Bai did not fight in Jhansi either, but was often seen supervising the army and doing the rounds in the fort at all hours. The ludicrous scene in the film, of her dragging a young Hugh Rose fallen from his horse, took cinematic licence to a whole new level.

In the popular cinematic rendition of a truly inspiring tale, the Rani is lost in the fantastical recreation. History still awaits a more credible narration.

The apotheosis of Lakshmi Bai from the Rani of a small, beleaguered kingdom to the deified symbol of resistance to colonial oppression was achieved over more than a century following her death in 1858 and recreated in multiple forms and media, several times.

The nature of its latest recovery in the film Manikarnika is a product of present India that is being emotionally rejuvenated by a sense of national pride, driven by the search for an elusive and essential past that foreign invaders, unmindful of its rich heritage and history, are believed to have overrun for centuries.

More than the need for historical veracity, this argument is premised on faith, which provides the setting for the present remaking of the legend of Lakshmi Bai as well and also explains its commercial success. Several times in the film, the battle cry of Lakshmi Bai conflates Jhansi with ‘Bharatvarsha,’ suggesting that its freedom would render the entire ‘mulk’, or country, free. Thus, the commentary by Amitabh Bachchan describes the intrepid and resolute Rani’s fight against the rapacious British as an act of piety, of retribution and redemption, almost spiritual in nature. Much like the recreation of a ballad, the brush strokes are bold, unequivocal and unwavering.

The first scenes set the stage. A young woman in a sari with the pallu trailing dangerously loose, highlighting her impeccable figure, stands in wilderness, aiming her taut bow at an angry tiger, while men and women stand at a distance, cowering. The arrow hits the tiger mid-air – the classic cinematic moment – but the animal does not die before making a final dash that brings him to the feet of this young girl. The signs were clear when an infant was raised from the waters of the Ganga by a father’s hands, reminiscent of the discovery of Sita.

From that moment until she dies fighting, Lakshmi Bai’s story is a linear account of fearless pride and self-belief, of uncompromising commitment to the welfare of the motherland and people, and of undaunted determination to fight the offensive invader. She is the human Devi whose image frames one of the shots in which the Rani stands spattered with blood, eyes blazing, in the act of slaying the evil. As the icon of the heroine is gradually crafted, the villains turn into dark, conniving, rude, rapacious individuals, as all the British are made out to be.

I am not reviewing the film here, but as an admiring biographer of Rani Lakshmi Bai, I find it has failed this extraordinary woman with an unmatched life experience, by resorting to exaggerated stunts with Marvel Comics effects (like jumping over horses to sit on an elephant) and theatrical distortions of the adversaries.

What is totally absent in the film is the enigma that Lakshmi Bai wore like a halo around her, a quality that left few in her life time untouched. The outlandishly brave young woman that we watch in every single frame of the film, responding as she does to every challenge with courage that borders on naivety and bluster, is anyone but Lakshmi Bai, who was seldom driven by impulses. The movie fails to capture different shades of her life that brought to the fore the many inflections of her character and maturity far beyond her age, and misses some unique photo and song opportunities. From a spirited young girl, she became a demure wife and young queen, an ecstatic mother, a distraught widow, an astute diplomat, an anxious Rani, and finally a feisty warrior.

Manu was an accomplished girl, raised and trained like a Marathi Brahmin boy. However, it was her marriage to Gangadhar Rao, 15 years her senior and the ruler of Jhansi, a principality besieged by crises, that tested and shaped her character. There was quite a romantic and dramatic moment when Manu set eyes on the Raja from a window of the house in Jhansi where she and her father lived. They married in the summer of 1842, the year the kingdom was returned to the ruler by the British, who had managed its affairs for the past four years as Gangadhar Rao was unable to bring the surrounding disaffected Rajput landlords under his control.

Manu was renamed Lakshmi, after the goddess of wealth, and in appreciation of her presence the usually taciturn Raja presented her with a beautifully crafted silver palanquin that she rode every morning to visit the Mahalakshmi temple in a procession that held the townspeople enthralled when they watched it pass.

Lakshmi Bai conformed to all social conventions, giving up riding publicly. Even though she did not always use a veil, and often sat next to her husband in court, she would always be behind the purdah when she went out, or if the British were present. The couple was on a long pilgrimage, unusual for the times, when she conceived after nine years of marriage. 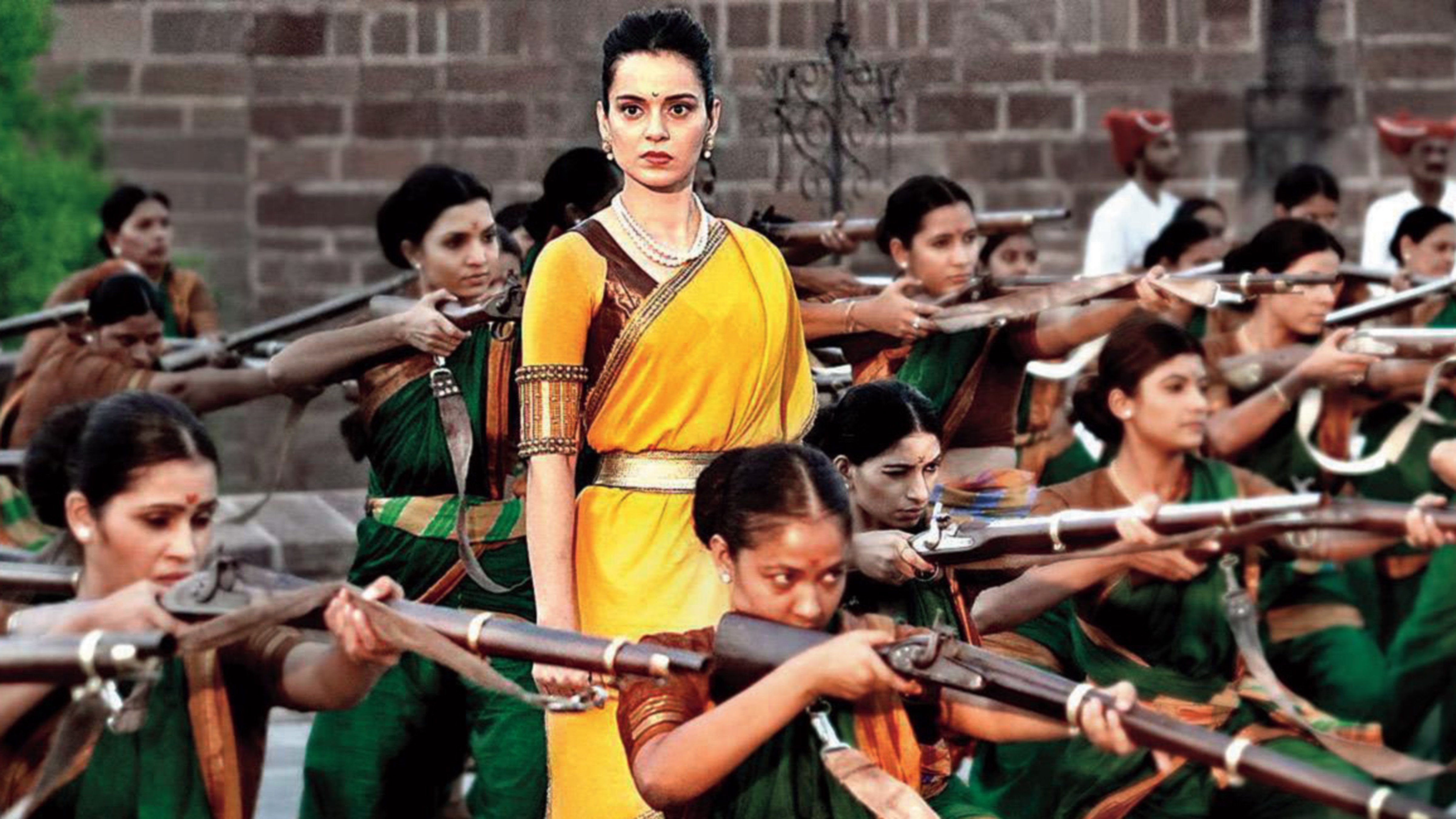 A still from the film 'Manikarnika: The Queen of Jhansi'